Meat suppliers are always looking for ways to fetch a premium for their cuts of meat. Maybe they just get lucky with something like beef brisket that just gets more popular, but more often they accomplish this by finding different ways to market the cuts they already have or alter the way they break down the animal. Cuts like the hanger and Denver steaks have only been found on restaurant menus for a decade, and the Las Vegas strip steak has only been marketed for a couple years. Some are hoping the next such item in line is pork brisket.

I got a couple pig briskets from a meat salesman the other day. He said his supplier was looking to see if he could find some interested customers looking for an innovative cut, or maybe to save money given the high beef prices we’re experiencing. I just wanted to see how it turned out in my smoker. 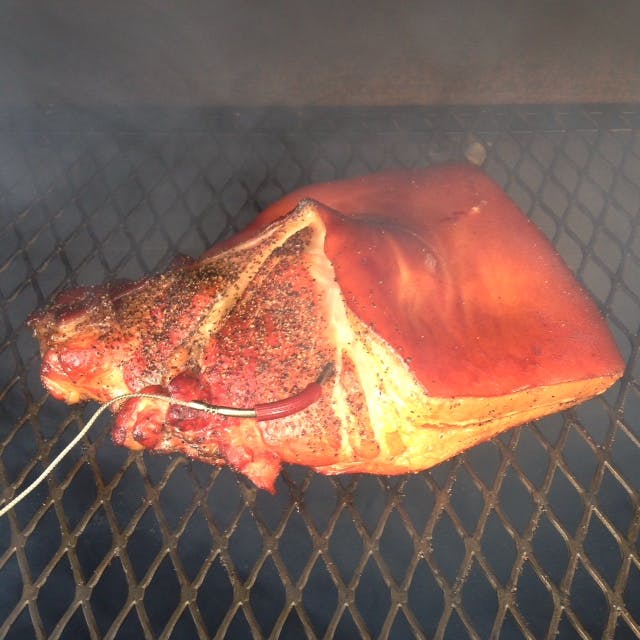 The briskets came skin-on and weighed 3 to 4 pounds each. I left the skin alone on the first one and smoked it low and slow. Despite many hours on the cooker, I just couldn’t get it to climb above 170. It took about eight hours, and then wasn’t even as tender as I’d like. The skin, as expected, was too tough to eat. If I’d been better prepared, I would have fired up the grill or a vat of oil to make cracklins, but it was late and I wanted to have a look at the meat.

A pig brisket is made up of two sides just like a beef brisket, it’s just that the fattiness of either end is swapped. In the pork brisket, the “lean” end is actually a portion of the belly and therefore quite fatty, while the “fatty” end toward the chest is actually part of the pork picnic and is leaner. The picnic is the less popular half of the whole pork shoulder. The Boston butt, or upper half of the shoulder, gets all the love, and if you’ve eaten pulled pork recently, it likely was from the Boston butt.

Once I started carving the meat it was obvious that there are many more muscles than in a beef brisket. The multi-directional grain of all the individual cuts meant that you really have to separate them all out if you truly want to slice against the grain. All those muscles also means lots of fat in between them. Getting that rendered out is of great importance. Otherwise, significant trimming is required and you’re left with mostly lean meat. That is, unless you cut from the belly side which is mostly fat. 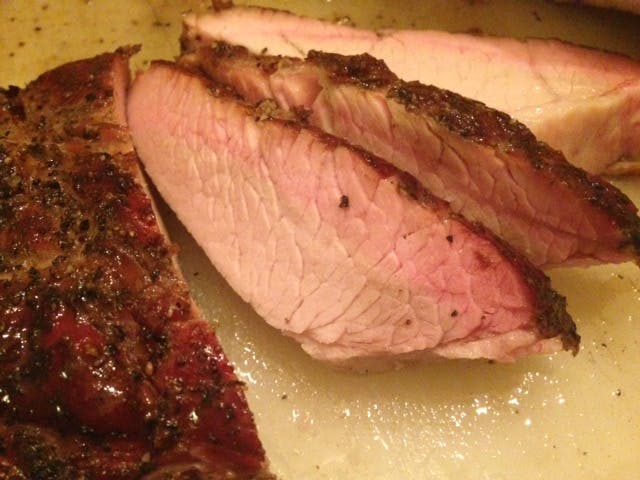 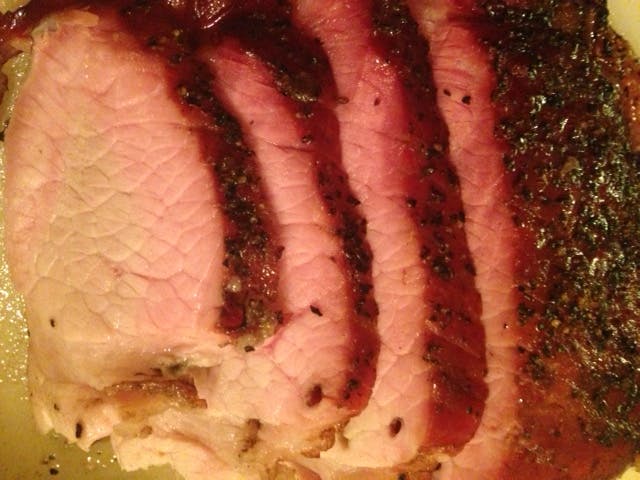 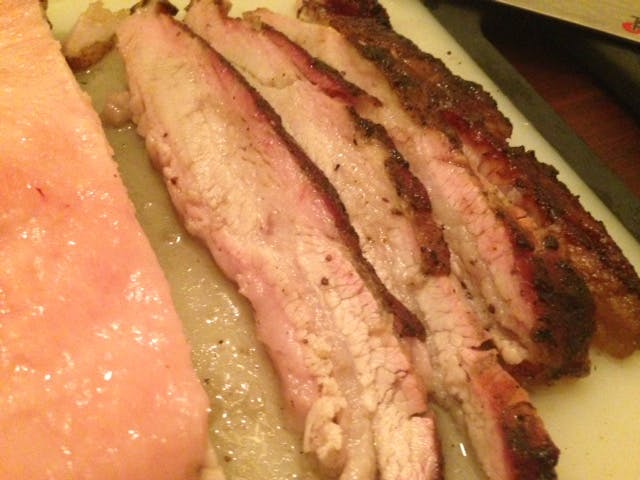 For the second brisket, I removed the skin before cooking. I still left plenty of fat on in order to better imitate the fat cap on a beef brisket. I also cooked this one hotter, never dipping below 250, and cranking it up to 300 to finish it. This one turned out incredibly tender with well rendered fat. It was so good I didn’t get a chance to photograph the sliced meat before it was eaten. 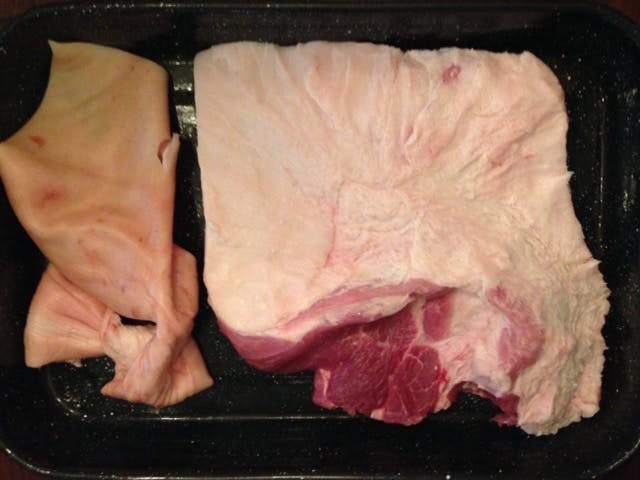 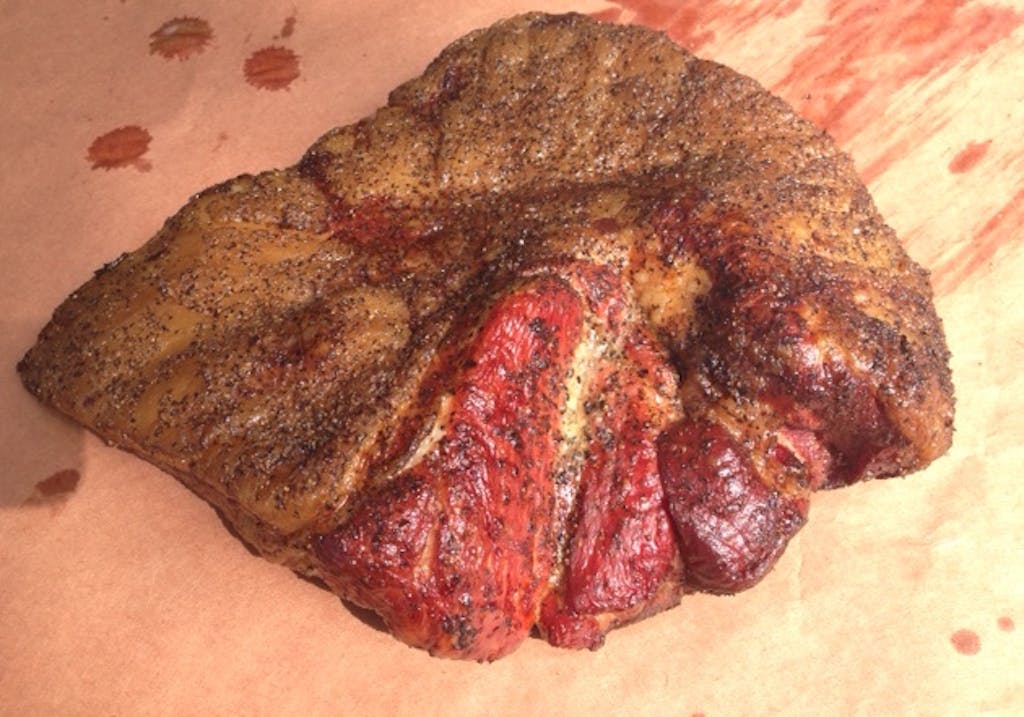 For these first two, I rubbed them with just salt and pepper. If I come across another one I think this cut would be best served by treating it like a Boston butt. Use a rub with some sugar, then smoke it until it’s tender enough to pull. The lean meat mixed with the decadent fat from the belly would make some superb pork sandwiches.

As for pork brisket storming the meat marketplace, that seems like a stretch for now. Other than the name, it bears little resemblance to a beef brisket, and shouldn’t be considered its porcine replacement. If you come across one its certainly worth experimenting with, but don’t expect to see it on restaurant menus anytime soon.