Until this week, I had never enjoyed a great bite of barbecue at Sammy’s BBQ in Uptown Dallas. I used to work in the neighborhood when I had a desk job, but Sammy’s was a lunch option only if somebody else was choosing. I had become a barbecue snob, and I was wasting no time on the dry, gray slices of what passed for brisket in this popular lunch spot despite the relentless suggestion that this was Dallas’s best barbecue. A suggestion that mostly came from men wearing khakis who tucked their ties in to eat. Simply put, the barbecue at Sammy’s BBQ was their weak link. That’s no longer the case.

I met owner Marshall Prichard at the judge’s table of an amateur barbecue competition recently. He knew my work, but we talked about whiskey and brisket rather than sour grapes. He’s a likable guy who told me he knew the brisket wasn’t very good, so they had made a change. Their old method was to smoke a lower grade brisket, hold it in plastic wrap, and cut the fat off before slicing and serving it. Now they start with a Prime grade brisket, wrap it in butcher paper, and leave the fat on. The total transformation was hard to believe earlier this week, so I went back again a few days later. The verdict? Sammy’s smoked brisket is eminently juicy, luxuriously fatty, and pleasantly smoky. In short, it’s excellent. 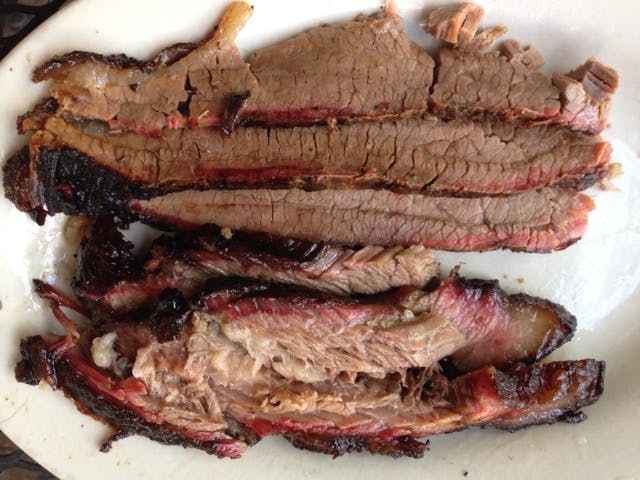 That second visit was on a Friday, and the place was rocking. By noon, a line wrapped all the way through the building and out the screen door in the back that leads to the ample patio. An out-of-breath Prichard was working the room. For the four hours a day that they’re open, he’s in constant motion, bussing tables, moving tables, answering the phone, and he even ferrying a couple slices of pie out to our table.  The apple is his mom’s recipe, but he likes grandma’s pecan pie better (they’re both baked in house daily), and for good reason. It’s more about pecans than the sweet filling. There’s a boozy flavor akin to rum cake, but Prichard swears it’s unleaded. Just chase it with some ice cream. 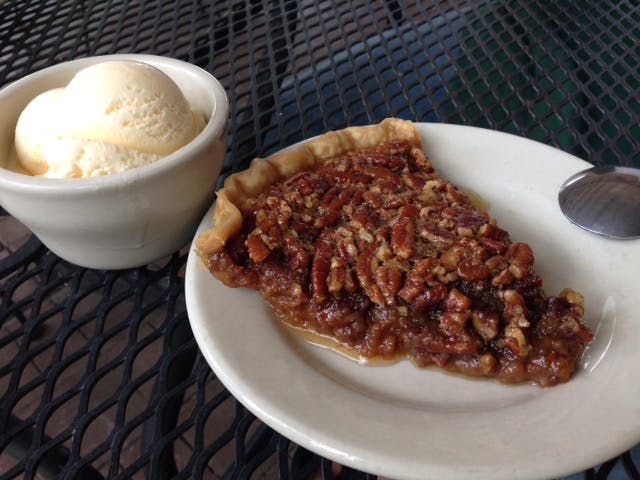 Stopping in on Friday also means it was borracho brisket day, but it has nothing to do with beer. As Prichard tells it, he received a couple cases of red wine as a gift. He’s more of a bourbon man, so he was looking for ways to use all that wine. How in hell he thought to use to for a brisket marinade, I don’t know. It starts with a mirepoix, then the red wine is added and reduced. Several briskets marinate overnight before being seasoned and smoked just like the rest of the day’s batch. This is a completely baffling discovery in a joint that boasts more neon beers sings than wine glasses. I’m not sure that I could taste the wine in the beef, but it definitely had a darker, more well developed bark. There was also a unique sweetness, especially in the fat. It just has greater depth of flavor when eaten next to their standard brisket. The regular stuff will do on any other day, but on Friday you definitely want the borracho brisket.

No matter the day, you won’t get yesterday’s brisket. Prichard smokes meat with the intent to sell it all. “You don’t want some brisket brick that’s been sitting there for three days,” he told me. And it’s priced to sell. In fact, this might be the best value brisket in Dallas. A pound of the stuff is just $13.95, but the smarter order is a three meat plate with all brisket. You’ll end up with about a pound of meat anyway for $12.95, and you’ll get two sides.

The sides may as well be family heirlooms. You can choose from Aunt Glenda’s baked potato casserole or mom’s potato salad. The slaw and beans are comforting in their simplicity, and the zucchini casserole is just cornbread stuffing that has convinced you that you’re eating veggies. And it’s all made fresh. Onions rings are dropped in the fryer right when they’re ordered, and the fried okra begins the mornings as fresh pods, not frozen pellets. They share the menu with two green salads to make you feel healthy if the need arises. 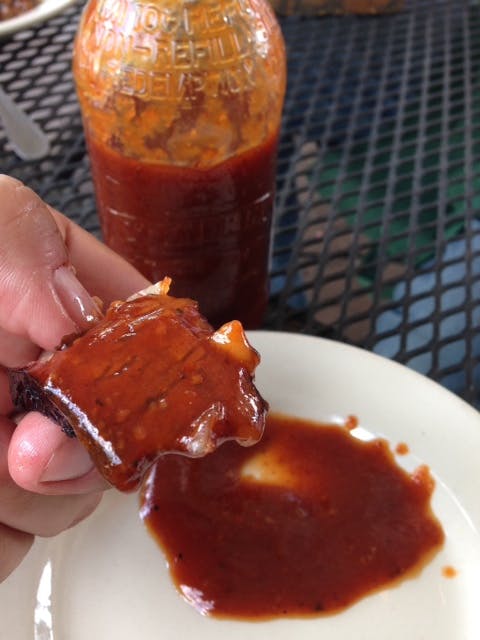 You may notice that I haven’t broached the sore subject of the other smoked meats. Tread with caution and grab a sauce bottle (it’s a modified Sonny Bryan’s recipe with copious meat drippings, and the bottles are held in a tub of warm water so you don’t get cold sauce), if you plan to veer away from the brisket. Ribs are mushy roast pork, but juicer than the stringy pulled pork or the equally dry pork loin. Ham and turkey are about as boring as smoked meat can get. The hot links from Smokey Denmark are tasty as is the sweetish jalapeño sausage, but why bother with commercial sausage when there is great sliced brisket to be had? By the way, that brisket is also pretty fabulous as a chopped beef sandwich. So much of the fatty goodness is left in the mix that gets chopped on the block, that the bottom bun won’t remain structurally stable for more than about five minutes. That’s a good thing. 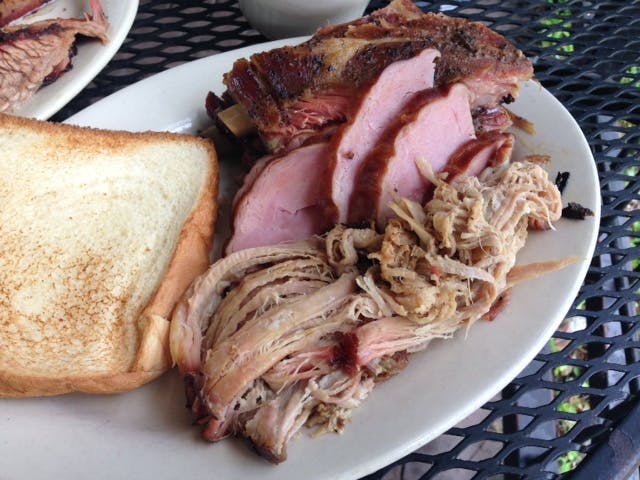 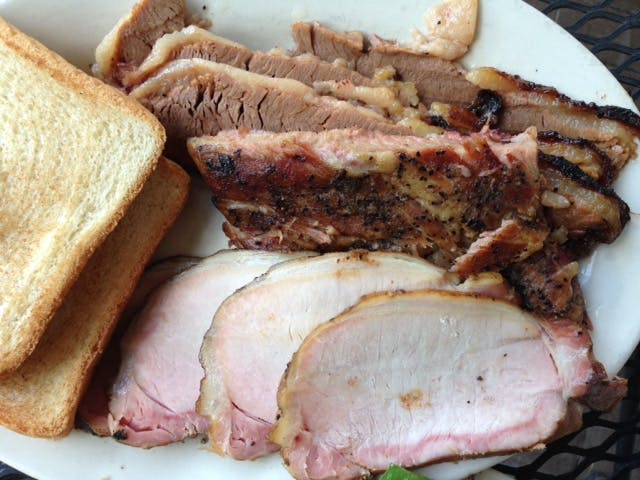 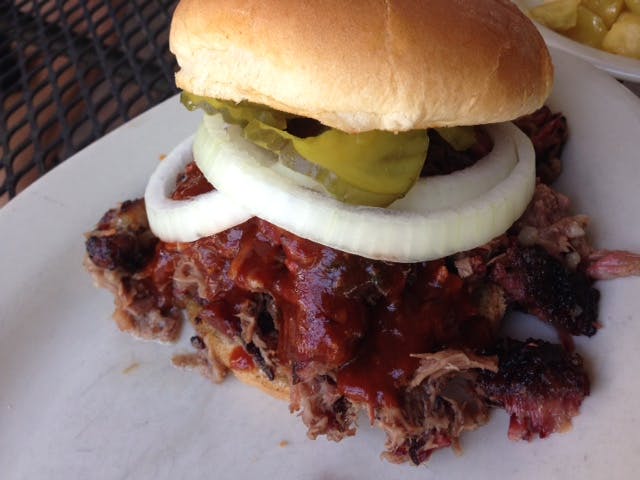 It might be hiding in plain sight, but I never thought I’d deem Sammy’s a brisket destination after years of disappointing meals. Go early to beat what can be a punishing lunch rush, and go for the brisket, sides, and for God’s sake don’t consider the meal complete without dessert. With a simple change to the menu, Sammy’s is solidly on the list of hidden barbecue gems in Dallas. And next Friday, you can try the hiddenest of gems when the handwritten sign for borracho brisket is taped to the wall once again.