The case for sauce statewide also got a fresh boost last month when Texas Governor Greg Abbott proclaimed that “the most important thing about barbecue is sauce.” Abbott has since told Texas Monthly that the statement was “my biggest regret,” but HEB customers haven’t seemed to notice the retraction. The grocery store chain is using their new focus on restaurant-branded sauce to build on two successful years of H-E-B and Central Market stores carrying three popular versions of sauce from Austin’s Franklin Barbecue.

All the recipes came from the barbecue joints, but as you can probably guess these restaurants don’t have the capacity to churn out large batches for a commercial bottling enterprise. For this, H-E-B partnered with Jardine’s, which has been bottling their own line of salsa and other condiments since 1979. Cale Nelson, vice president of Jardine’s, handles all of their private-label items and acted as a liaison to barbecue joint owners interested in getting their sauce on H-E-B shelves. In addition to recruiting these various joints, he also had to explain to them what the challenges of manufacturing on this level would be, like what it takes to scale products up from small batch family recipes.

“We have different requirements around cooking time and temperature, and things that make the product shelf-stable,” Nelson told me over the phone. Bottled sauces need to be acidic in order to be shelf-stable. “Usually the pH on barbecue sauce is okay because there’s so much vinegar in it anyways,” but, Nelson added, ingredients like butter and other dairy products create problems with potential spoilage. 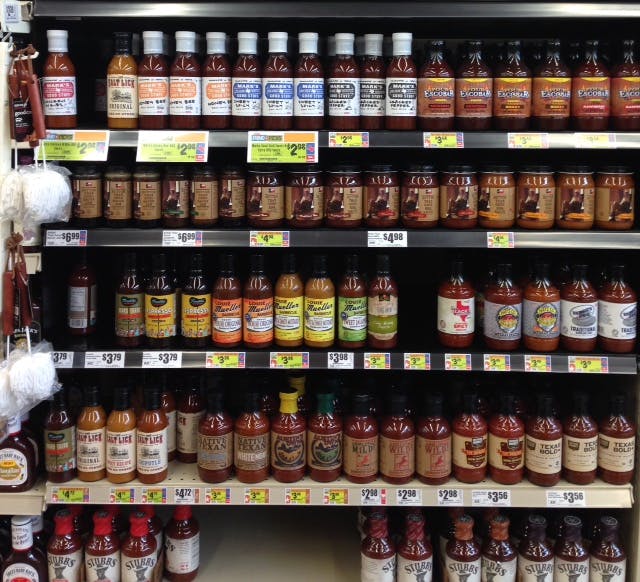 Nelson went on to explain the process of revising a sauce recipe that uses mere cups and teaspoons to one using pounds, liters, or gallons. “We’ll take their recipe based on the small-batch size that they’re doing on the stovetop, and they’ll scale it up to a 2,400-pound [300 gallon] batch, which is our kettle size.” Then it gets cooked in the kettle until the temperature reaches 200 degrees. If the original sauce recipe from the restaurant had simply been a blended sauce, the cooking process might alter the flavor. Nelson continues, “The main thing is that you’re making adjustments on when you’re scaling up a recipe are around the chemical and sensory properties like pH, the salinity for the salt flavor, and viscosity.”

The viscosity was the big issue with the first big batch of Franklin Barbecue’s sauce a couple years back. As Aaron Franklin explained, the issue was as basic as a spatula. The batch was too thin because they’d added water to get the total volume right. “It turns out that they had hoisted these enormous tubs of ketchup, but didn’t scrape the walls of the tubs and I think they missed several hundred pounds of ketchup in the first batch of sweet sauce.” Adding that, “We use a spatula on those ketchup cans at the restaurant.” Their espresso sauce also needed lots of attention to get right because they don’t exactly make industrial-sized espresso machines. “We have an espresso machine at work, so we pull the shots fresh for the sauce in the morning, but you can’t pull 34,000 double espressos at a bottling facility; we had to use a coffee concentrate.” After many batches to find the sweet spot, Franklin admits, “It’s really close, but it’s never going to be exactly the same.”

There was another elusive flavor in Franklin’s sweet sauce that they never found a good way to replicate. Aaron Franklin shared how he arrived at his “aha” moment for the missing dill flavor.

We were working on the recipe and going back and forth on it a bunch, but there was one thing they couldn’t quite figure out. They kept coming back with their ingredients, and they were right, but it just didn’t taste the same. They kept tasting something like dill, but we didn’t have any dill in our recipe. Then one day I was standing there in our kitchen staring at a wall full of pickle buckets that we stored our sauce in.

Even after adding pickle juice, they couldn’t replicate it quite right, so Franklin suggested jokingly to “buy a bottle and pour it in a pickle bucket, or just come to the restaurant.” Although the sweet and espresso are the most popular at the restaurant, Franklin prefers the vinegar sauce. “If I make a turkey sandwich, that’s the one I’m going to pour on there.”

For Michael Hernandez of Hays County Bar-B-Que in San Marcos, the recipe translation ran a little smoother. The first test batch needed some tweaking, but “by the second run, they were right on the money.” But Hernandez was just working with sauces they’d made for years. Terry Black’s Barbecue was asked to create a new flavor. They already served a tangy and a spicy at their Austin restaurant, but they were asked to develop a milder, classic Texas barbecue sauce for the grocery store customers. “That’s when we came up with the ‘original’ sauce, even though the name is a little ironic,” Terry Black’s pitmaster Michael Black told me. “It’s more ketchup dominant as opposed to the other two that are mustard-based.” Black also noted that they have a one year exclusive deal with H-E-B, but may explore expanding to other stores after that time period.

Wayne Mueller at Louie Mueller Barbecue, in Taylor, also created a new sauce recipe just for H-E-B. “The Sweet & Tangy Mustard Sauce” wasn’t offered in the restaurant until it was bottled by Jardine’s. You may recognize the “Sweet Jalapeño” flavor if you went to last year’s Texas Monthly Barbecue Festival. That’s what he served on the smoked lamb chops. But the “House Original” isn’t exactly the original Louie Mueller sauce. 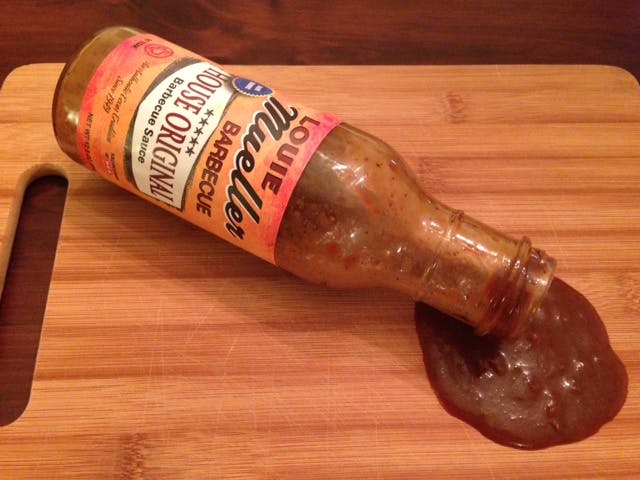 If you’ve been to Louie Mueller you may have gotten a Styrofoam cup of the very thin house sauce which is more of a dip. It’s closer to water than gravy in thickness, but that wouldn’t do so well as a bottled sauce. They needed a thicker version, so Jardine’s helped Mueller adjust his long-held family recipe to one that poured like a barbecue sauce. As Mueller said, they needed to “make it a bit more viscous so it would cling a little bit more.”

Mueller says he’s happy with the sauces that made it to market. While he’s not getting rich on them, the extra dough is a nice bonus, but his motivation to bottle the sauces wasn’t as much about money as exposure. “At the restaurant, we’re limited on the amount of people we can serve a day and the amount of product that we can do…This is a way to extend a piece of who we are out there.” And like all of these sauces, each label is a small advertisement of the restaurants that developed them. They’re also a symbol of trust between the restaurants and Jardine’s.

Family sauce recipes can be closely guarded secrets, so giving them up to a large business like Jardine’s can make some restaurateurs uneasy at first. Belender Wells at Fargo’s BBQ in Bryan had been holding onto her dad’s recipe for years. Fargo’s started off serving a doctored up commercial sauce at their restaurant, but decided to make a switch when H-E-B called. She sent them her dad’s sauce recipe to bottle, and now they serve it in the restaurant too. Still, Michael Hernandez from Hays County Bar-B-Que isn’t worried about sharing secrets. Per their contract “they can’t duplicate it or disclose it to anyone else.”

Getting the recipes right in the first place was one challenge; keeping them right is just as important. Stacey Franklin spearheaded the bottled sauce endeavor for Franklin Barbecue and she offered a note of advice to any restaurants looking to bottle their sauce: “You have to be there to try it before they put it in a bottle.” Making sure every large batch is correct is crucial. She added that “once it’s been distributed, it’s too late. Unless it’s going to hurt someone, it’s not going to get pulled because it costs too much money.” The Franklins dealt with this issue recently when a new batch of their sauce went onto shelves with high fructose corn syrup (HFCS) on the ingredient list.

I noticed this when I picked up a bottle recently at H-E-B. At the restaurant, the Franklins make the use of all natural ingredients a high priority. They use hormone-free and antibiotic-free beef, pork, and turkey. The sauces are made with Simply Heinz organic ketchup, which is what Jardine’s had started off using. Then in the latest batch Jardine’s swapped in regular Heinz along with its HFCS, which made the Franklins understandably unhappy. Cale Nelson with Jardine’s understood the frustration and noted, “Franklin Barbecue was very specific that they didn’t want any high fructose corn syrup…They wanted all natural ingredients in everything that they made.” But Nelson owned up to it. “That was a mistake made on our end.” He assured me (and the Franklins) they won’t make the same mistake on the new batch that’s about to be bottled, but the Franklins don’t have much power over what happens to the sauce currently on shelves. As Stacey Franklin noted above, there isn’t a food safety issue with the recipe swap, so the monetary burden of a recall could fall to them.

That hiccup aside, the partnership between Jardine’s and these Texas barbecue joints seems to be sweet thus far. They have plans to add Gatlin’s BBQ in Houston to the line-up and are courting others. I did have a laugh with Wayne Mueller when I mentioned that he’s got three barbecue sauces on the shelf, but advises his restaurant customers to try the meat, especially his smoked beef, without any of them. He retorted: “My sauces are primarily created for white meat and sausage.” As for those who might be tempted to pour the sweet jalapeño sauce all over their beef rib at Louie Mueller Barbecue, Wayne suggests that customers might “save it for your eggs tomorrow morning. It’s awesome on an omelette, I swear. It’s not just for smoked meats anymore.”