When a process is notoriously complicated and unpleasant, people tend to trot out a time-worn idiom: you don’t want to know how the sausage gets made. While the saying is especially useful when it comes to any political bureaucratic dealing, it’s a bit derogatory and it slightly diminishes the art of the craft, a sentiment I’m sure Freedmen’s Bar pitmaster Evan LeRoy would agree with.

Recently Freedmen’s, one of the best new barbecue joints in Texas, was as stop on one of our TMBBQ tours. During our visit, LeRoy explained the basics of sausage-making and its numerous variables, including choosing grinding plates, casings, and seasonings. Even if it sounded slightly laborious, LeRoy provided to me a set of very simple proportions that can serve as an easy base for your own recipe:

Per LeRoy, the proportions above are derived from Michael Ruhlman’s book Ratio. Ruhlman measures by weight—as opposed to volume— when cooking, a method that works especially well for replicating sausage recipes. (Ruhlman preaches the importance to the meat:fat:salt ratio in his sausage chapter, and LeRoy believes the added liquid ratio is equally important.) But thinking in ratios opens up innumerable possibilities and frees you from exacting, precise recipes. Do you have some lean venison on hand? Grind it with some pork fat (or brisket fat, or duck fat), add salt and your favorite beer (or wine, or chicken stock, or just ice) and voila: sausage. Then you can really personalize it with the seasoning mixture of your choose.

At Freedmen’s they also add pink salt to their sausage mix, which works as a preservative. Keeping with the ratio theme, they add pink salt at 0.25 percent of the total weight of the sausage mixture. You can add it too, but there’s no need if you plan to eat your sausage within a day or two after making it.

If you’ve been to Freedmen’s and love their standard sausage recipe, it goes like this:

That’ll get you an awful lot of sausage (about 360 links if you figure 1/4 lb each), so feel free to pare it down a bit for home consumption. 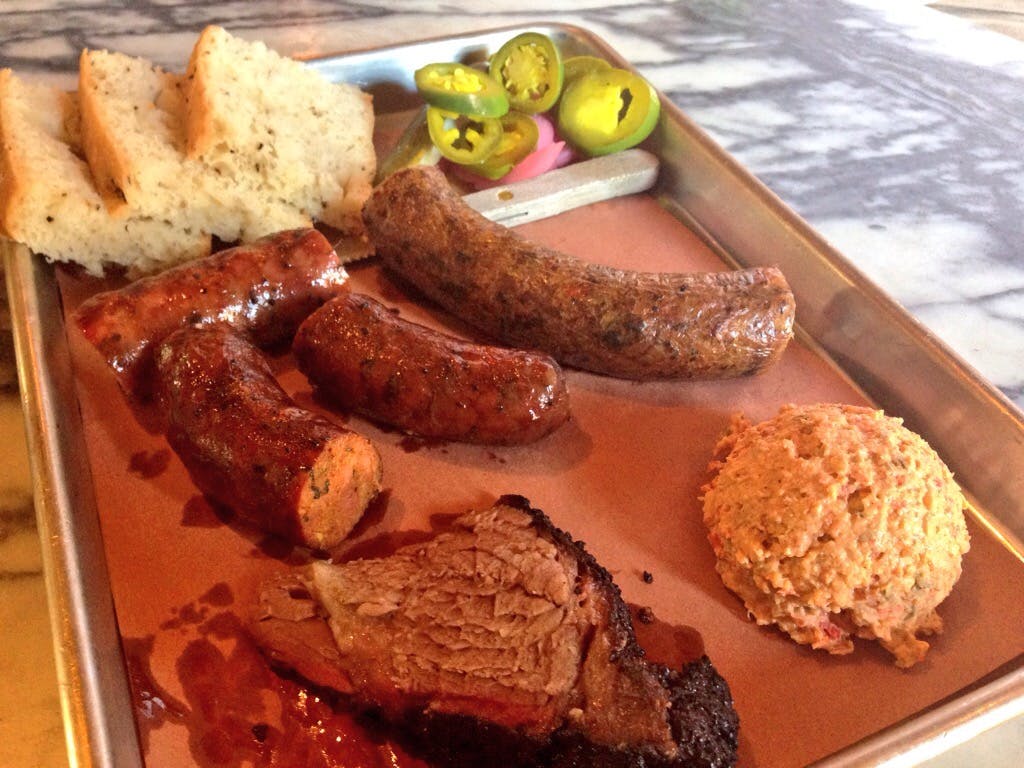 If you were on the TMBBQ bus tour mentioned above and loved the brisket/venison/butter sausage recipe LeRoy served special for the occasion, he shared that recipe as well:

Cut the meat into cubes. Season the cubed meat the day before you plan to grind and case it (the pink salt needs about a day to cure).

Freedmen’s grinds the mixture once through a coarse grinding plate, and then mixes it thoroughly by hand until it goes from crumbly to tacky. (A tip from Ruhlman, which should help keep ingredients cold throughout the process. Place the meat and grinder attachments in the freezer before grinding, and chilling the meat thoroughly in the refrigerator before mixing and stuffing.)

At this point, you can either create sausage links or keep the meat as sausage patties. Stuffing the casings requires a little patience, but here’s a good how-to video that shows you the step-by-step process using a KitchenAid stuffing attachment.

Once the links are done, it’s ready to smoke. Freedmen’s puts the sausage at the coldest end of the pit so it gets a lot of smoke and the casing has time to dry out and get snappy. 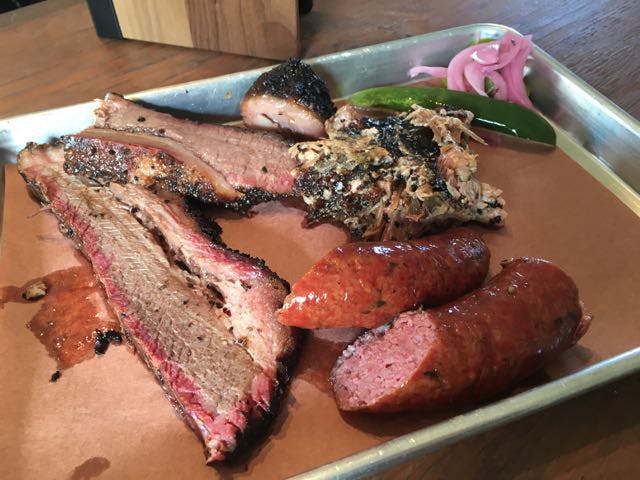