When Schmidt Family Barbecue opened late last year it was billed as a taste of Lockhart, without having to drive to Lockhart. Two of the most famous barbecue joints in the state, Kreuz Market and Smitty’s, had put aside their differences. In a show of family unity, they partnered and created a bright, new, shiny barbecue joint in Bee Cave, just west of Austin.

When I first visited on a preview night, all the signs of Lockhart barbecue were there on the menu. Kreuz Market beef sausage, thick cut brisket, shoulder cold, and big spare ribs sold by the pound and served on butcher paper (alright, there were plastic trays too). They had it down, but this wasn’t the Schmidt family’s first foray into expansion. While not carrying the name Kreuz Market, Hill Country Barbecue Market in DC, Brooklyn, and Manhattan, and Lockhart Smokehouse in Dallas and Plano were all opened with family involvement, and they all get that Kreuz Market sausage shipped in.

A few major differences here in Bee Cave that stood from their Lockhart predecessors were the smokers and the space. The new building with lots of glass and steel was never going to have the soul of Smitty’s, but it’s still vast with minimal decorations. One also has to remember that Kreuz Market is housed in a building that was brand spanking new in 1999. Pitmaster Chad Franks (married to Susie Schmidt Franks, granddaughter of Edgar Schmidt) has traded the built-in brick pits of Lockhart for heavy gauge steel. A couple of steel Bewley smokers do most of the workload here. They also brought in another steel offset smoker a few months after opening to keep up with demand.

One reason they needed all that smoker space was a vast menu of smoked meats. I tried a little of everything during a dinner time follow-up visit earlier this year. The only dud then were the dried out slices of shoulder clod, but nothing I ate was giving Lockhart a run for its money. “But, it’s closer to Austin,” you say? Only slightly. I’ve driven to both Bee Cave and Lockhart from downtown Austin a few times, and getting from the capital building to the capital of Texas barbecue takes only ten minutes longer than the thirty minute drive to Bee Cave. Schmidt Family needed to start catering to Bee Cave instead of Austin, and they did. 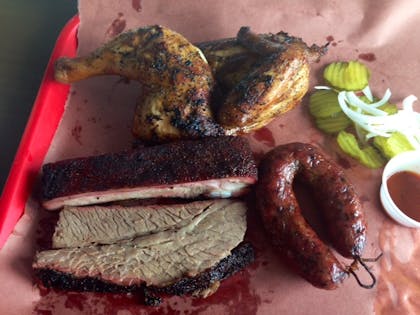 During a lunch visit a couple weeks back, some changes were evident. Shoulder clod was gone from the menu entirely, as was the boneless pork tenderloin. After smoking a single shoulder clod daily, and having to throw out most of it, they cut ties with this historically significant cut and added a more suburb-friendly smoked half chicken. Given their execution, this wasn’t a bad choice. The skin was crispy and the meat was moist, even the chicken breast.

A slice of brisket with a little fatty and a little lean on it was superb. It was juicer, and held onto its moisture better than what I’ve routinely received in Lockhart. The crust was good and salty with a solid smoke flavor. The brisket alone makes this joint worth a visit. Those pork ribs weren’t bad either. They’ve got a hefty bark and the black pepper dominates the flavor. They could have come from the bone a bit easier, but this was a good companion to the brisket. 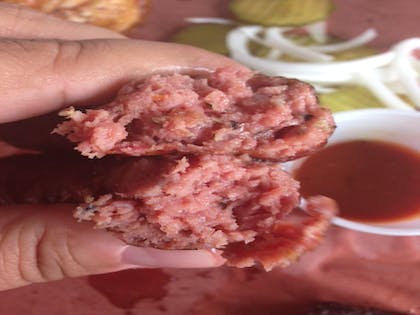 If it’s Kreuz Market sausage that you crave then what they’re serving at Schmidt Family Barbecue will satisfy. The links are plump with juice, and there’s a great smokiness clinging to that snappy casing.

You’ll have to wait until the weekend to get a taste of the smoked prime rib, beef ribs, pit ham and a smoked pork chop, but you can still eat very well on a weekday in Bee Cave. There might be fewer options, but I think the items that remain benefit greatly from the focus. You know they’re on the right track when the brisket rivals the quality of their predecessors in Lockhart, but this restaurant was built for Bee Cave.