If you’ve traveled down I-35 between Waco and Austin, you’ve probably wondered about Schoepf’s. Red billboards in either direction beckon. The name is noticeable if only for its phonetically challenging spelling (they say it “shuffs”). It might also be in your consciousness if you’re a longtime reader of Texas Monthly, which included it in the Top 50 BBQ Joint lists in 1997, 2003, and 2008. If you wonder why it didn’t make it onto the latest one, blame Miller’s Smokehouse a few blocks away; the ability to taste them side-by-side puts Schoepf’s at a disadvantage. But Schoepf’s long hours and hyper-convenience to I-35 (you can see the restaurant from the highway) still make it a worthy stop.

I wrote last month about the dying art of Hill Country-style barbecue, in which pitmasters cook meat directly over coals (in Schoepf’s case, over mesquite wood burned down to coals). The intense heat from the inferno that feeds the steel box pits just behind the cutting room seems like it would melt the metal walls that surround it, and indeed, while the pits are on display for those who want a peek from the other side of the fence, entering the pit room is discouraged. 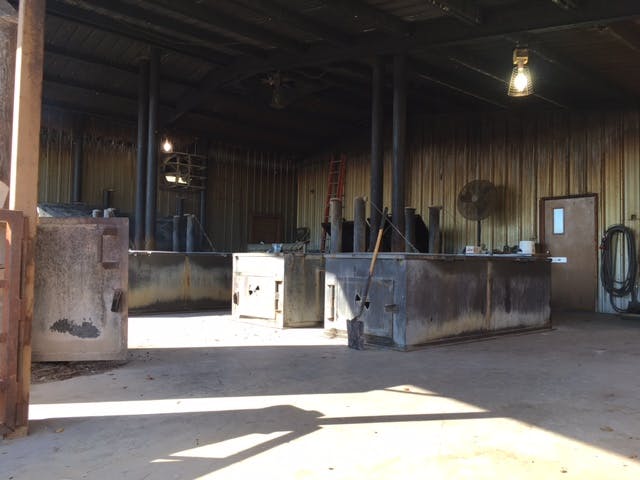 Much like Cooper’s and Hard Eight, which also employ the Hill Country-style method, foil plays a large part in the brisket cooking process at Schoepf’s. The meat is wrapped tightly after a short romp directly over the coals. The sliced meat comes out juicy and tender, but more like a good pot roast than smoked brisket. If you want a taste of the fire, the pork spare ribs are a better option. A ragged bark gives way to meat that requires some teeth. It’s good and salty, and plenty juicy. (I should note that visits here later in the day have resulted in dry meat, which is why I timed this visit for 10:30. They serve breakfast from the wee hours, but the full menu is available after 10:00.) 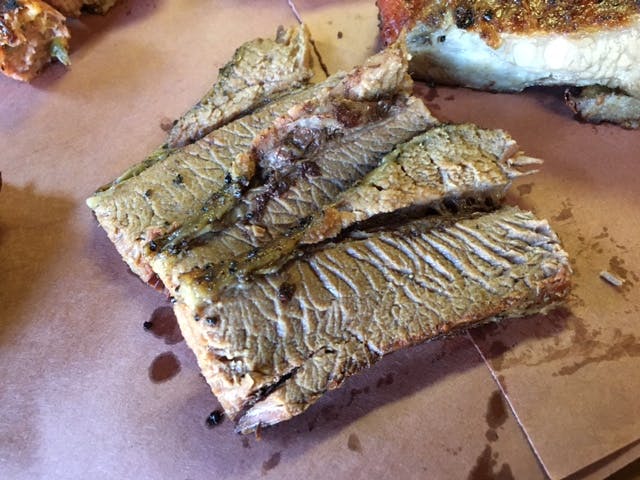 In the past, I have praised the giant pork chop, and I’ll do the same today. The two-inch thick monster was lightly dappled with pepper. Each bite was just juicy enough, but another thirty minutes on the warming pit, and I’d be reaching for the sauce. If they’re cooking these by feel, a thermometer might be a better companion, but I did enjoy some of those crusty edges. 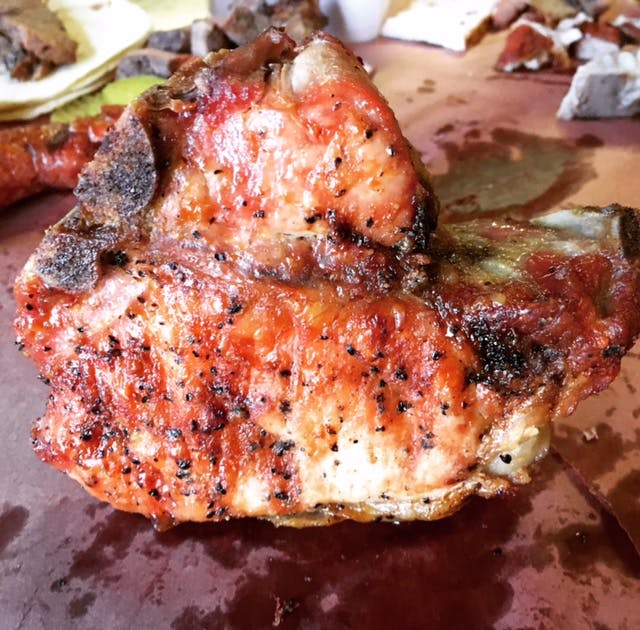 They’ve revamped the sausage options here. There are two Solana Ranch recipe sausages, and three housemade versions. The house venison wasn’t available, but I loved the original and jalapeño sausages. Both were juicy, smoky, and well seasoned. Either would have been great on a breakfast taco if I’d gotten there a bit earlier. 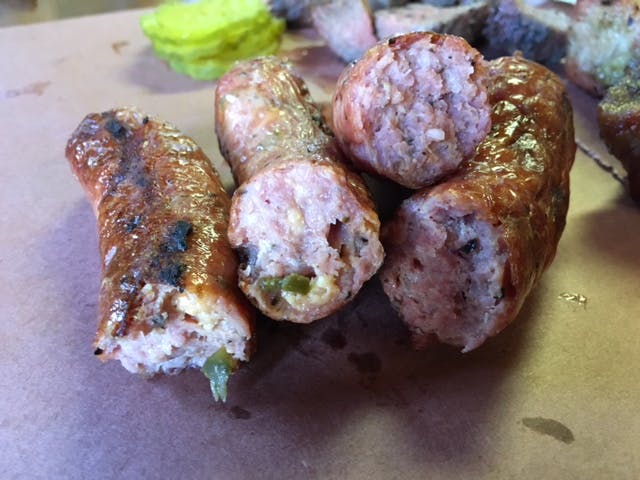 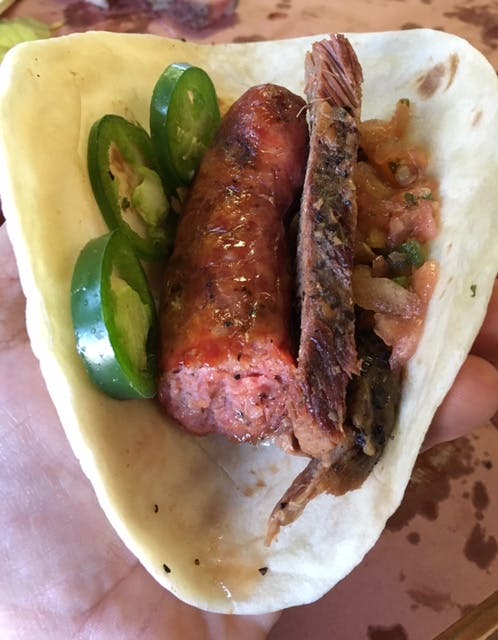 As for the rest of the platter, the sirloin, verging toward medium-well, was cut into chunks. It didn’t match the brisket for flavor. With both at $17 per pound, I’d skip the sirloin and opt for the brisket instead. Sliced turkey was a solid version, but it was a different bite of poultry that impressed me: a nugget of quail stuffed with a jalapeño and surrounded by crisp, thick-cut bacon. Getting all of those textures just right with these disparate ingredients is an art, and they nailed it at Schoepf’s. These alone are worth the visit.

Simple sides of mayo-based potato salad and pinto beans were fine accompaniments if not very exciting. The thinnish sauce with a kick of vinegar was also good. I especially liked the option of fresh sliced jalapeños along with my onions and pickles. As a bonus, because they do serve tacos you can ask for tortillas instead of white bread. Just make sure they warm them up first. 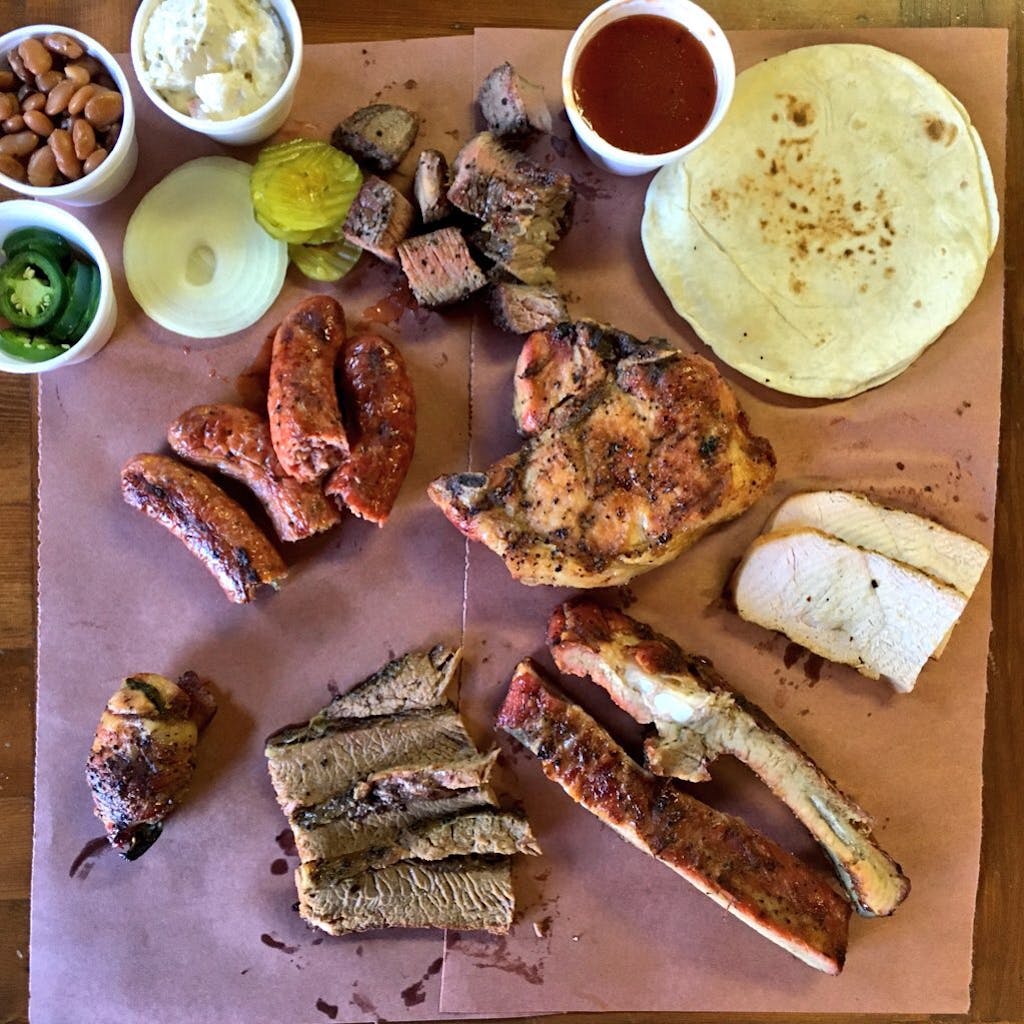 If you’re looking for a convenient barbecue fix, Schoepf’s is better than most highway stops. With their new sausages, a nice big pork chop, and a bacon-wrapped quail or two, it doesn’t even have to be convenient to be worth a visit.