Short Line BBQ is just fifteen minutes from two major interstates, but you’ve probably never driven past it. Brothers Jeremy and Jason Daugherty opened the barbecue joint, which is housed in a metal building not much wider than a king-sized bed, in April. “The price was right,” Jason joked when I asked why they’d chosen tiny Maypearl, in between Interstate-35 East and its western counterpart, just south of Dallas. Maybe so, but now the brothers are struggling to find enough customers in a town of 1,000.

“When school let out it was like somebody hit a switch,” Jeremy told me just after the Friday lunch hour. In the summer lull, Short Line—perhaps living up to its name a little too closely—has cut operation to just two days a week. There were just a few customers inside waiting for their order, including a couple of Ennis County Sheriff’s officers. The joint is designed for takeout, only offering a couple of stools inside and the unshaded picnic tables out. That’s where I sat through the punishing heat and relentless flies, wondering if the new ad for fidget spinners at Maypearl Hay & Feed across the street was a mirage. But after a couple bites of incredible brisket, I forgot about the temperature.

“Somebody knows how to cook barbecue,” was my first thought as I savored a bite of fatty brisket. I then mentally canceled the rest of the day’s planned barbecue stops, knowing this was a tray of barbecue that wouldn’t go to waste. The buttery fat of the moist brisket was a treat, and the lean brisket beneath was even juicy, balanced out with the perfect ratio of salt and smoky bark. Pork ribs were tender and sweet, with a layer of sauce dabbed on at the end that hadn’t had time to set. It was a good flavor complement to the pork, but I like a rib with a stouter bark.

The brothers Daugherty make an enjoyable pulled pork sandwich with a good sauce and thick cut dill pickles. The juicy pork (or chopped brisket, if you prefer) is also available on a baked potato, which I missed out on. Nor did I get a bite of the banana pudding, which they hadn’t had a chance to make that day. The homemade potato salad almost made up for it. Light on the mustard and almost completely mashed, it’s a good, creamy version. I also liked the simple pinto beans made from dry beans and seasoned simply.

But most impressive—aside from the brisket—was the garlicky pork sausage, which Jeremy said was an old polska kielbasa recipe they had tweaked. The smoke flavor is mild, as is the seasoning—it seems the black pepper is saved for the brisket. The pork is coarsely ground, and the links are juicy. The sausage alone is worth stopping for.

Out back is a steel smoker that the brothers built using Aaron Franklin’s barbecue book as a guide. They’ve watched all of his videos and read up extensively about barbecue technique. The brothers are students of Texas barbecue, and it shows in the product. They’re making great barbecue that deserves more attention. And though there might never be long barbecue lines in Maypearl, the Daughertys would settle for enough business to open a few more days a week. 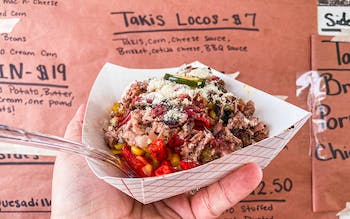 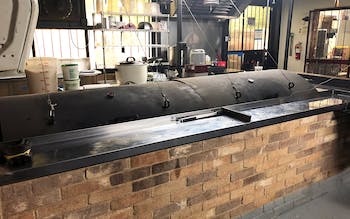