A reader forwarded me this note comparing Shorty’s BBQ to Pecan Lodge in Dallas. “At Shorty’s, you don’t have to wait and they don’t run out of food, AND the beef is just as good.” I’d seen the prominent signs for Shorty’s on Highway 80 east of Dallas*, but this was the note that got me to stop. I know from enough years of disappointments to go into these situations with tempered expectations, but a solid amount of hope always comes along for the ride as well. The smoky smell in the parking lot helped coax that hope along further. 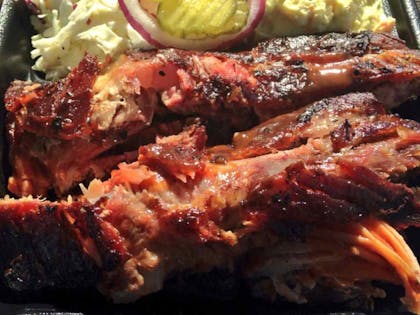 This is more than just an afterthought truck stop restaurant. A furnished patio is just outside the front door, while a few tables and chairs fill the dining room inside. Orders are given at the counter where the meats and sides are displayed in steam table pans. It’s not all pretty, but you know what you’re going to get. Take the ribs for example. They were mushy and thoroughly overcooked, but I could tell that by looking into the mass of meat and bone and meat in the pan. I had to order them, but you don’t, unless you like overcooked ribs. The pork itself wasn’t bad. It was covered in barbecue sauce, which usually bugs me, but this was a really good sauce. Both sweet and tangy, the sauce was thin enough to coat the ribs, but thick enough to stick to the meat too. It left me ambivalent about the ribs which would have been better served boneless and chopped to be eaten with a fork, or better yet – on a sandwich. 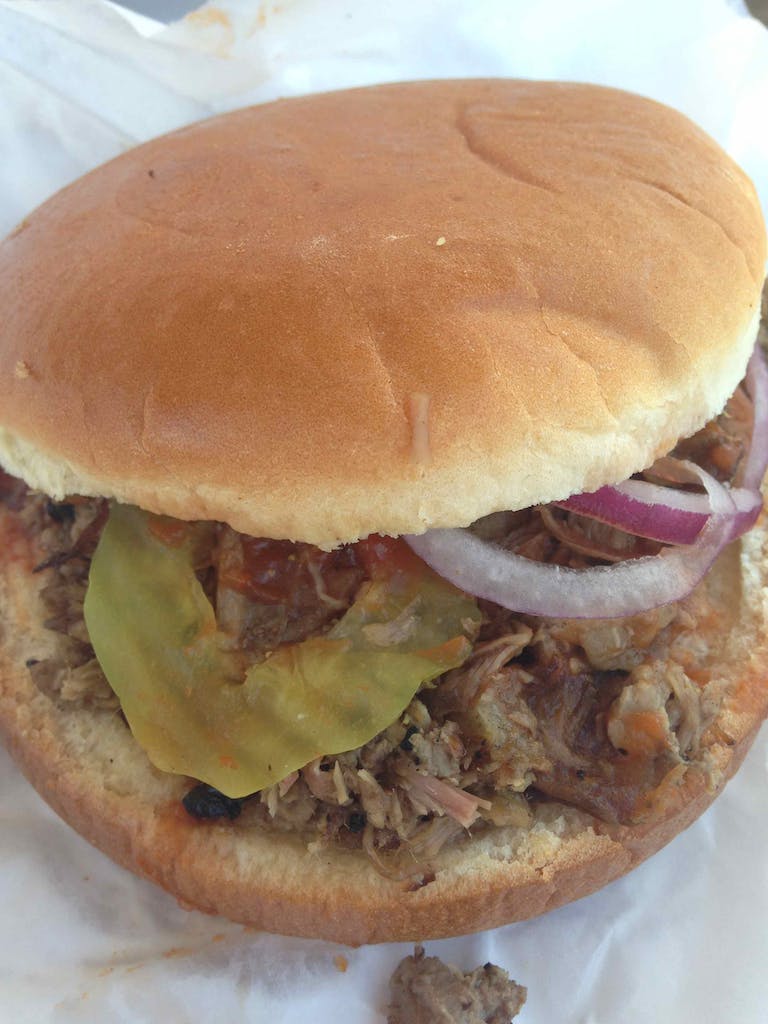 The sandwiches could use some improvement too. Chopped beef can be a safe refuge menu item at a joint where you suspect the barbecue might be suspect, but it’s just okay at Shorty’s. The chopped beef doesn’t include much black crust into the mix, and the meat is placed onto a cold, white bun. There isn’t much soul to it. This is a surprise when you see how much attention is paid to the sides. Beans, slaw and potato salad come with all of the barbecue plates. The potato salad was thick with plenty of tang from the mustard and an unexpected addition of dill. The slaw was lightly dressed and crispy. Pintos beans had been thickened with some mashed beans and were heavily seasoned with a good kick and plenty of meaty flavor. These sides show that somebody really knows how to cook back in the kitchen. 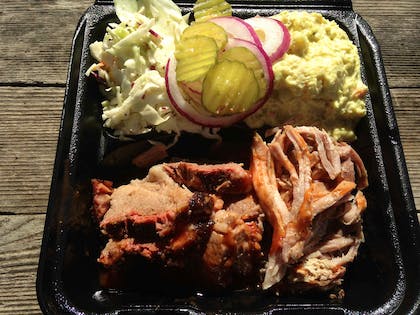 Going back to the meat, the pork was pulled into strings. Again, the sauce worked great with the meat, but the well cooked pork tasted more like  roast than barbecue. Then there was the brisket. Our friendly tipster either ate at Pecan Lodge on a bad day, or Shorty’s on their best day. I found the brisket to be just passable. The flavors were muted and the the slices just fell apart. It was respectable, but it alone wasn’t anything that would make me return. If they take me up on that boneless rib sandwich idea (watch out McDonald’s), I’ll be back in a heartbeat. I’ll get some beans too.

* If you’re eastbound on Highway 80, go just past the East Fork Rd. Exit and use the next one labeled Frontage Rd. The big yellow B-B-Q sign will be right in front of you.