Smoke had a revamping of their menu some time ago. Out with the market-style by-the-pound barbecue menu and in with more innovative, if not traditional plates of smoked meat. The lunch and dinner menus both feature these smoked meats in different combinations. For lunch, pulled pork and andouille share a plate with two sweet-glazed spare ribs. Well-spiced beans and pleasantly mild homemade sauerkraut round out the plate. I enjoyed this lunch at the bar as I talked with Chef Tim Byres about travel options in the heart of Mississippi that he discovered on his barbecue sojurn. I was only slightly embarrassed that I had to take out my camera to snap a shot at the plate, but I think he understood. 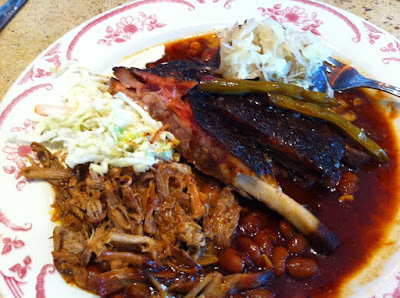 The pork was truly pulled and lightly covered in an East Carolina-style vinegar sauce. The meat had great flavor but was missing smokiness that some nice outside brown bits could have supplied. My love for the homemade sausages here is no secret, and today’s andouille was no different. Ribs were smoked a bit beyond tender, but the fat was nicely rendered out and the meat was beautifully moist. A sweet glaze added to the meat post-smoking gave these ribs great flavor without diminishing the nice smoke in the bark. 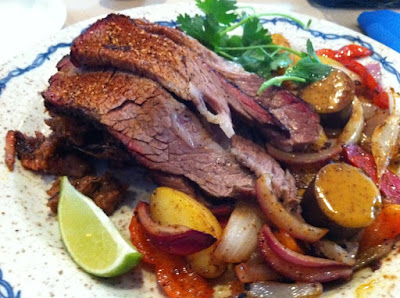 On another trip I tried the brisket. It has gotten a lot more fancy, but the flavor has also improved dramatically. Both sliced and chopped beef come piled atop a pile of sautéed peppers, onions, and potatoes. A couple of thick slices of paprika-and-fennel sausage were a nice accompaniment to the plate. The sliced brisket had been oddly dusted with a dry rub, but it didn’t overpower the meat, which was just smoky enough. The slices had some fat left on, but it could have been better rendered with more time in the smoker, which would have also tenderized the beef a bit. Chopped beef was juicy with bits of nicely melted fat and a little sauce to round it out. The improvements in the meat have made this selfish blogger happy to have another good option just a few minutes from Uptown. Is that cabrito I just noticed on the menu?