See If You Can Finish the Huge, Brisket-Stuffed Baked Potato at Franks Holy Smoke BBQ

I’ve never eaten a bite of Texas barbecue so strange and unexpected as the garlic parmesan ribs at Smoke Sessions Barbecue in Royse City. “I feel like everybody in the barbecue community is trying to one-up each other,” owner Chad Sessions told me, and he wanted to make a unique mark. “Nine times out of ten, when somebody thinks they’ve come up with something that’s never been done before, it has,” he said. But he’d never seen ribs encrusted with grated cheese. Neither had I.

Sessions got the idea during an anniversary dinner with his wife, Jessica, at a Brazilian restaurant, which served a parmesan-encrusted pork loin as one of its skewered-meat options. “To be honest, it was my least favorite of their meats,” he admitted, but it sparked an idea. While eating garlic parmesan wings a week later, Sessions decided he had to try it on some of his barbecue. The combination of smoked ribs and dairy is rare but certainly out there, but then again I just had lemon pepper ribs a few weeks back, and the Cajun wings at Wingstop aren’t all that different than a Memphis dry rub.

Back at the barbecue trailer, he ordered a tub of grated parmesan and some concentrated roasted-garlic paste from his food vendor. The paste acts as a slather that goes directly onto the raw pork ribs, about two tablespoons per rack. Sessions’s usual barbecue rub, which is heavy on the black pepper, goes on next, and then they’re smoked just like his regular ribs. About fifteen minutes before they’re done, the ribs come off the smoker. He adds another layer of the garlic paste, then packs on the parmesan rub, which is mixed with a few herbs and more granulated garlic. That’s a lot of garlic, and Sessions admits his love for the flavor. “Everything we make has garlic in it somehow.”

There was a strong aroma of garlic and cheese as I hoisted the massive Duroc pork rib up to my mouth. It smelled like I’d emptied a packet of grated cheese onto a New York slice of pizza. “Little Caesars’s Crazy Bread is what it reminded me of the first time I tasted it,” Sessions, a former employee of the pizza chain, told me. He thinks of this as a gluten-free version of the Crazy Bread. The flavor of smoke and pork is pretty much overwhelmed by the garlic and parmesan. In that sense, it reminded me of the heavily seasoned garlic parmesan wings that I’ve eaten in the past. But it tastes like no other barbecue I’ve eaten before, and I’d try it again.

Sessions smoked the garlic parmesan ribs the last few Fridays, and they sold out each time. As we talked, we brainstormed about other wing flavors that may be appropriate for ribs, like spicy buffalo ribs or a dry rub rib with a dousing of ranch dressing. Sessions said he doesn’t have immediate plans for other options, and promised he wasn’t developing a blue-cheese dipping sauce. He does plan to offer the garlic parmesan ribs every Friday as long as they keep selling, so get there before they sell out for one of the craziest bites of barbecue you’ll have this year.

See If You Can Finish the Huge, Brisket-Stuffed Baked Potato at Franks Holy Smoke BBQ 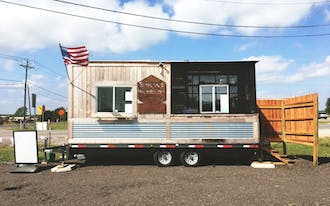