Three years ago I ate some promising barbecue from a food truck in the shadow of I-410 in San Antonio. Chris Conger was doing it all that day inside what was called Conger’s Smoke Shack, cooking, slicing, and making change. Last year he had stowed away enough change to make the jump into a steep-roofed building along Broadway just north of the swanky Pearl district. The food truck is still hanging around the highway at lunch time, but the Smoke Shack business is now all grown up.

I ate at the new restaurant the day after they opened their doors last April. I’ve been recommending it ever since, but never thought it would take a year for me to get back for a review meal. It was worth the wait.

A year ago the signs were good that Smoke Shack would become a barbecue destination in San Antonio, but there were a few hiccups like under seasoned brisket and tough ribs. Those issues have been smoothed out, especially when Conger is there to offer a helping hand. 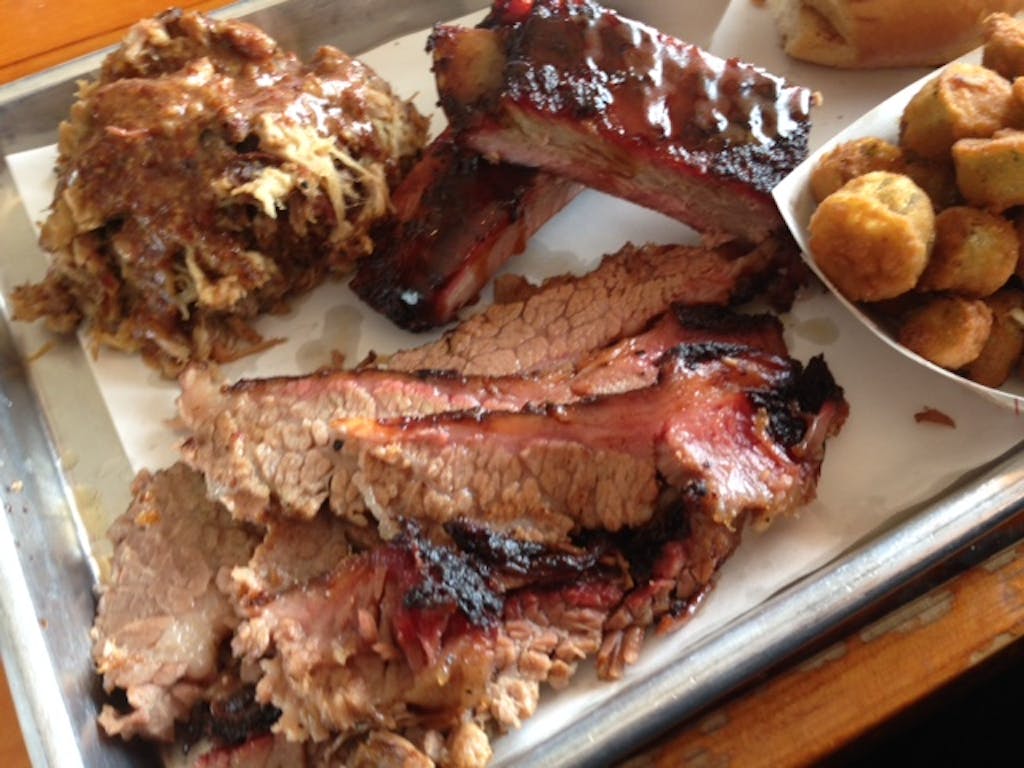 With nearly the entire menu in front of me and my two friends, it was the glistening ribs that beckoned. Each bite of the tender and meaty rib pulled away from the bone with ease. They were a competition barbecuer’s dream, complete with a glaze so sweet and buttery it was hard to know if it was meant for a cake or meat. I get it. Sweet and pork are natural companions, and I can get on board with that, but this was a glaze meant to cover mistakes. It seemed like the rib beneath didn’t need the assistance. Then I did something I rarely do at a barbecue joint. I asked for a new rib, but without the sauce. 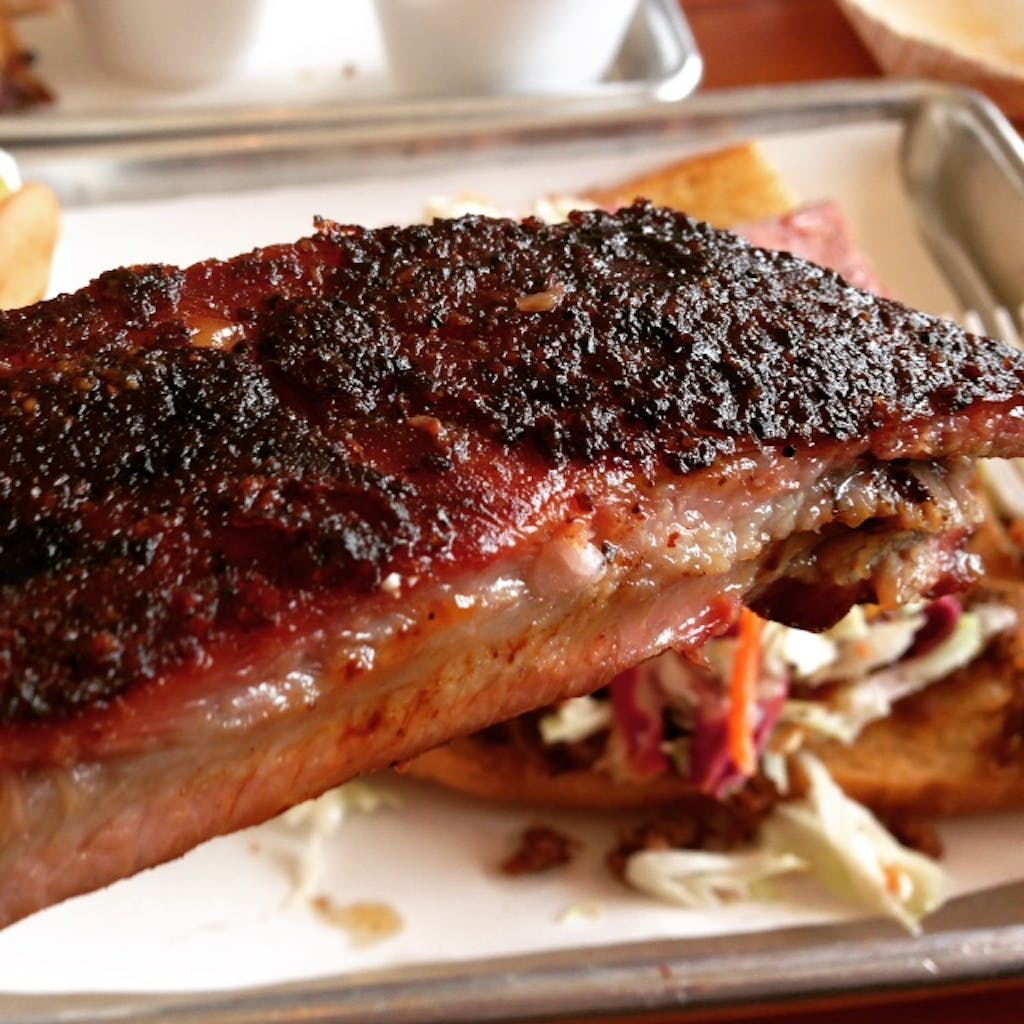 Conger, who was scanning the entire dining room during my meal, was happy to oblige. He brought over one of the most perfect ribs in my recent barbecue memory.  There was a sweet and savory bark kissed with just enough smoke. The texture was such a flawless balance between falling off the bone and clinging too tight that they might need to rewrite the textbook. Skip the need for a complaint and just ask for them to leave off the sauce on your ribs. I could’ve eaten a dozen more, but there was plenty more on the trays before us. 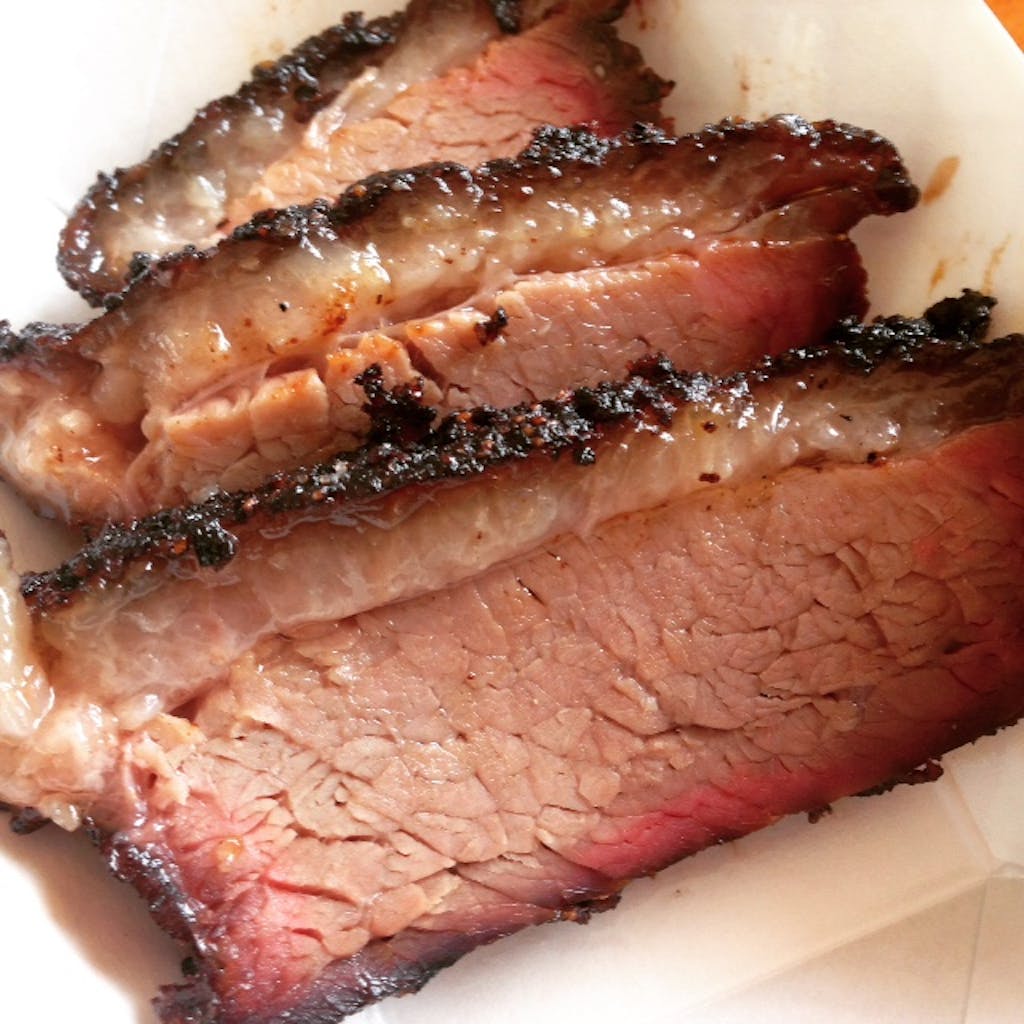 The fatty brisket was sloppily cut, but had great flavor and pulled apart nicely. I ordered another quarter pound of lean just to see how it compared. Besides, a skilled pitmaster should have you craving their lean slices as well as the fatty brisket. At Smoke Shack, dare I say, the lean was better. In fact it was the best slice of brisket I had during this trip to San Antonio. The line of fat was buttery soft atop the juicy beef. There was some sugar in the rub along with a good bit of salt and some spice from the black pepper. It was stunning brisket, especially considering that it came out of a Southern Pride. When I jokingly chided Conger on his equipment selection, he said he’d finally figured out how to use it and how to get good smoke on the meat without it tasting stale. He has also stopped smoking briskets in pans that stifle the crust formation on the bottom.

I could stop there and feel comfortable recommending a stop here, but we’ve only just begun. Smoked turkey was a solid version, if a bit boring and a tad dry. The chicken breast got a boost of salt from the brine which also helped it stay juicy (yes, good white meat). The skin was crisp and well seasoned from a poultry-specific rub. 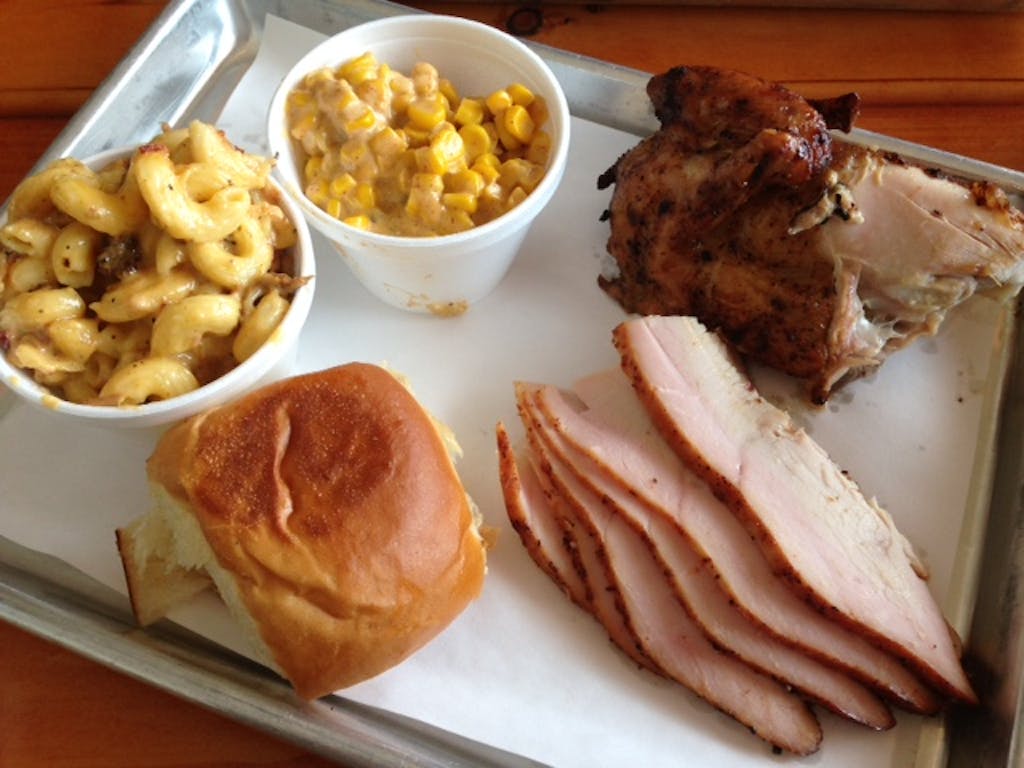 There were some mixed feelings about the pulled pork. It comes piled high on the tray with a generous squeeze of their sweet mustard sauce on top. The pork beneath was great, but it was hard to tell with the first few forkfuls. They contained more sauce than meat thanks to the heavy coating. I love their mustard sauce with the pork, but I wish they’ve give the diner more control on the ratio. I mean, they already have a bottle of it on the table.

We were headlong into a rather heavy meal at this point, so maybe the brisket mac & cheese just felt like overkill. I liked it fine, but it could almost function as a main dish for lunch. Creamed corn could have been equally heavy, but was actually pleasantly restrained on the cream side of things. The corn also had some good spice. The loaded baked potato salad, fortified too heavily with cheese and soggy bits of bacon, was the lesser starch. Fried okra is as good a frozen version as I’ve had, but it was still a disappointment after being told that it was hand-battered when I was ordering.

I tried a few bites of the simple slaw atop the Big Dog which brings together chopped beef, pulled pork, and sausage all on one sandwich. It’s served open-faced, and I kept it that way while nearly finishing the excellent chopped brisket. One oddity though was seeing a puny half link of sausage inside a sandwich called the Big Dog. I forgot about all that anyway once it was time for banana pudding. This simple vanilla pudding base gets big chunks of banana, whipped cream, and caramel along with the requisite Nilla wafers. The grayish color of the pudding was a comforting reassurance that this pudding gets its flavor from actual bananas. 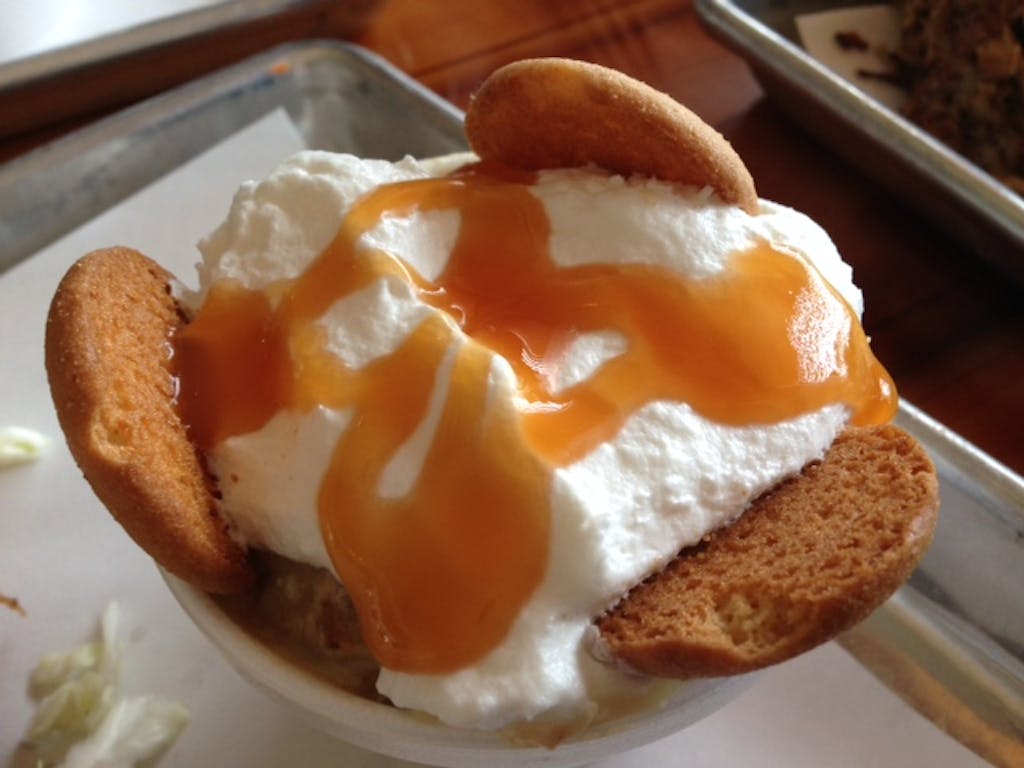 A year into their stint on Broadway, the Smoke Shack has turned into an impressive barbecue joint. They’re providing San Antonio a great option for smoked meat, and one that’s available for lunch and dinner. It’s rewarding to see the promise that I saw in the original food truck blossom into what is now a place I can feel more comfortable recommending to visitors and locals alike.