Allen Prine isn’t sure when they first started serving ham at Prine’s Barbecue in Wichita Falls, but he estimates it was soon after his grandfather opened the place in 1925. They’ve gone through different suppliers—switching to their “new” one almost two decades ago—but Prine says the ham has always been bone-in. “The one with the bone in it just tastes better,” Prine tells me unequivocally. “I’ve tried hams from all over, and none of them come close.”

A compact concrete block building a few blocks from the highway houses Prine’s Barbecue, its location on the corner and the smoking brick pit out front make it hard to miss. They serve brisket, sausage, ribs, and a generous smoked bologna sandwich (say “yes” when they ask if you want sauce and relish on it), but I like to stop in for a ham sandwich. There’s usually a huge ham sitting on the cutting block behind the counter. Prine gets them in already cured and smoked, but adds more of his own flavor. “We cook it for another eight hours over solid wood,” he says. It gives the outer bark an extra boost of flavor, and every sandwich gets plenty of it. 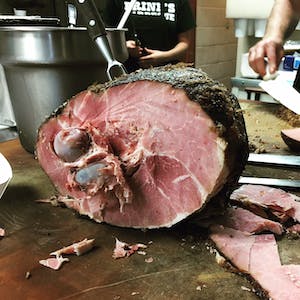 The ham demand isn’t huge during a regular week. Three or four go on the pit every day. But things change during the holidays, when they smoke hundreds in the weeks leading up to Thanksgiving and Christmas. If you’re picking one up for the holidays, you may want to ask Prine for some tips on slicing it. “You need a few years to get used to slicing ham off the bone,” he says. “It takes practice.”

A recent trip from Dallas to the Panhandle has made it more obvious how few choices there are for decent barbecue along the 350 mile stretch between the DFW area and Amarillo. Prine’s is always a welcome stop along the way in Wichita Falls, and they open early at eight in the morning (closed on Sunday and Monday). The filling ham sandwich is $5.

For $1 more, you can add a scoop of their house-made pimento cheese, which alone might be worth a stop. Once they get down to the last few inches of ham on the bone, the remaining chunks are cut off and ground to go into the cheese. Prine loves the old family recipe, but he doesn’t eat it on any of the barbecue sandwiches. He prefers to scoop it up with Fritos.