This past weekend Portland, Oregon got a taste of Aaron Franklin’s brisket. The Austin pitmaster travelled to the Northwest for Feast Portland, a culinary event that brought chefs in from around the country – along with plenty of homegrown talent – to showcase their dishes to hungry attendees.

The brisket from Franklin Barbecue was served at the Feast Portland brunch village on a sunny Sunday morning. Within five minutes of the gates opening there were fifty people in line for their version of a brisket taco. Until the crowd subsided, there was another smoked item in the brunch line-up. Butcher & Bee from Charleston, South Carolina had a smoked lamb neck over grits. The juicy pulled lamb had a great smokiness, but all I could think about was that Franklin brisket.

Franklin wasn’t serving up simple slices of brisket like he normally does at the restaurant. He wanted to give the crowd a taco, so he got a little help from another Austin barbecue joint. Valentina’s Tex Mex BBQ produced dozens of flour tortillas (a smaller version of what they use in their taco truck), making Franklin’s checked luggage pretty hefty. A charred salsa and an avocado slice were added to make one heck of a breakfast taco.

Witnessing just how popular a Franklin Barbecue brisket was in Portland, I wondered about the city’s barbecue options the other 364 days a year. Smokehouse 21 just west of downtown is run by chef BJ Smith. An adventurous menu that included pork cheeks and lamb ribs also featured the basics of brisket, ribs, and sausage.  I tried as much as I could, but found the sides of smoked corn, potato salad, and mac & cheese far better executed than the barbecue. Everything here is heavily rubbed, smoked in a Cookshack, then finished in the oven. Brisket was hidden beneath a finishing sauce brushed onto every slice, an overly thick, sweet glaze was generously applied to chewy spare ribs. A local publication recently named these the best ribs in the city, but I didn’t see the appeal. Maybe it was an off day for the ribs, but there was no excuse for the pork cheeks. Cheek meat is a tough and well marbled cut that is generally cooked to beyond tender. This one should have come with a steak knife to help get through the tough hide. An overcooked portion of steelhead trout was the best tasting of the options.

A better local option (along with Podnah’s which I visited last year) is a few miles south in Lake Oswego. The Pine Shed is a favorite of Bruce “Mr. BBQ” Bjorkman who had me on his weekly barbecue-centric radio show while I was in town. He drove me down to Lake Oswego where we met pitmaster Matt Ramey. He smokes with apple and oak in a custom made all-wood smoker. Their sampler includes a smoky and meaty spare rib, juicy chicken, promising brisket (it was dry but flavorful), and homemade all pork hot link. There was also a severely undercooked beef rib included, while the pulled pork (not pictured) was spot on. You might forget about all of it once you taste the mac & cheese. Four kinds of cheese come together with penne pasta, and it’s topped with crispy bread crumbs and chunks of smoky house made bacon. It’s some of the best I’ve eaten anywhere.

The best barbecue item I ate in Portland wasn’t from a barbecue joint at all. Mi Mero Mole is a Mexican restaurant specializing in tacos run by Nick Zukin (full disclosure, Zukin is a friend/antagonist of mine). He’s got a small cabinet smoker in the kitchen, so there are always a few smoked items on the menu like a smoked lamb with mole and smoked tongue in salsa verde, both of which are fantastic. This past Saturday he prepared one of his regular specials – smoked turkey tails.

Turkey tails are the butt of the turkey, more properly referred to as the pygostyle. It’s a fatty portion of dark meat that is richer than any other bite of turkey I can remember. The cut is so rich and fatty that its flavor is closer to pork than poultry. It was actually banned from Samoa for several years as they tried to curb their obesity epidemic. Zukin smokes it until the skin is crisp, the fat has started to render out, and the meat is tender enough to pull. Rather than pulling all that he had smoked for tacos, he brought out two intact tails for the table to try. With just salt and pepper, it was fantastic. This was a better bite of poultry than any smoked turkey breast I can remember eating, even Aaron Franklin’s.

We picked all the juicy meat off down to the bone and saved the skin and fat which Zukin then fried to a crisp back on the kitchen’s flat top. The result was the only kind of turkey bacon that I’d be happy eating again. I had plenty of incredible bites during my four days of Feast Portland, but I never expected the most memorable one to be a turkey butt in a taco shop. 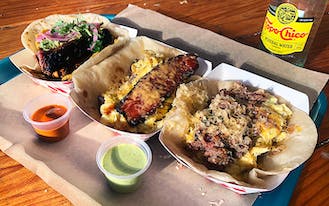 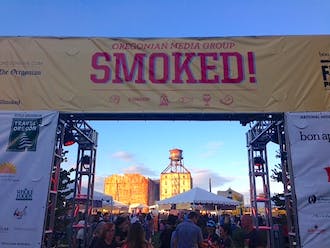 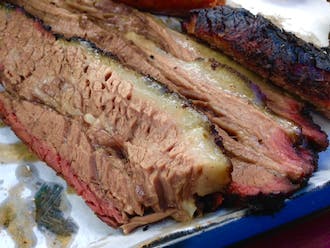