Burnt ends aren’t just for brisket anymore. And let’s get something out of the way, Kansas City barbecue fans: don’t get too sanctimonious about proper burnt ends only coming from a brisket; I’ve had ham and sausage burnt ends in your city.

Beef belly burnt ends were the special last week at Cattleack Barbecue in Dallas. Pappa Charlie’s in Houston and Killen’s in Pearland both serve a decadent version of burnt ends made from pricey beef short ribs, and the massive popularity of Heim Barbecue in Fort Worth is partly due the delectable chunks of pork belly they call bacon burnt ends.

I was taken with these bacon burnt ends after one bite. Sweet and smoky chunks of pork belly were cooked down until each bite bursted with fat and salt, with just a little chew from the lean meat and the exterior bark. When I first had them, I asked for the recipe. When they became part of the joint’s @BBQsnob sandwich, I asked for the recipe. In a shigging ploy disguised as a promise for publicity, I again asked for the recipe when I wrote the draft for this post a month ago. The Heims didn’t budge. “I spent too long developing the recipe to give it out.” Travis Heim told me. He was smart to save it as the kicker in a Heim Barbecue cookbook down the road, but I still wanted to know how to replicate them.

So I winged it. Heim was right that it was more complicated than it seems, but after four attempts I’ve got a recipe (actually two) worth sharing.

First you’ll need to cure a pork belly. Find yourself a raw chunk of pork belly with the skin off. You can get this at any Asian or Hispanic grocery store about $2 a pound, or you could go to a high end grocer and find it for double the price. A three-pound chunk is the size I used, because it fits nicely in a one gallon Ziplock while curing. The cooking times shouldn’t vary much with larger pieces since they’re all the same thickness.

Now you need a rub that will “cure” the belly. Instead of making true bacon by using a pink curing salt, I opted for salt, brown sugar, and maple syrup. The result won’t keep for an extended period like packaged bacon, but its plenty safe in the fridge for three or four days, and there won’t really be any uncooked bacon left after you make the recipe. For my first attempt, I didn’t measure the rub. I just mixed up equal parts of salt and brown sugar, added enough maple syrup to make a slurry, and rubbed it on generously. It was a mistake. The result was too salty, which meant I couldn’t use much additional seasoning after the smoked belly was cubed. I needed to tone down the saltiness.

I usually refer to Michael Ruhlman and Brian Polcyn’s book Charcuterie: The Craft of Salting, Smoking and Curing when starting any sort of cured meat project, but instead I used an easy to remember principle I learned on their new Charcuterie app. Contributor Bob del Grosso noted that most people prefer meat that is seasoned with enough salt to equal 1 to 1.7 percent of the total weight of the meat. I shot for 1.5 percent in my rub. It easier to work with these percentages in metric, so that meant for a three pound (1361 grams) chunk of pork belly, I’d need 20 grams of salt. I weighed it out, and added the same amount of brown sugar and enough maple syrup to make a slurry. After smoking, it turned out to be the perfect salt level for this recipe.

The next step was to apply the curing rub. It’s best to put the pork belly in a plastic bag that you plan to store it in while it cures in the fridge. That way there’s less mess, and you don’t leave any of the rub on a plate or pan. Place it in the fridge for three days, flipping once a day. When it’s ready, take it out of the bag and rinse it thoroughly in the sink. Get all the rub off. There’s plenty of seasoning inside the belly at this point.

All of the above steps can be skipped if you’d rather start with a chunk of cured and smoked bacon. I tried it in one iteration and it turned out fine, but the final result was more dense, and a bit less juicy. It’s also a heck of a lot more expensive to buy bacon than pork belly.

Now it’s time to smoke. I smoked mine in a vertical smoker (a Pit Barrel Cooker), because I like the flavor of the fat dripping into the coals below. I also like that I can easily cook at 350 degrees and the belly reaches 180 degrees internal temperature in just an hour. That was target temperature because it cooks out a good deal of the fat while keeping the belly from overcooking to a point that it can’t easily be cubed. It also gets it done enough that the whole smoked belly can be stored in the fridge if the second step has to wait.

Cool the meat a bit on your cutting board, then cube it as shown in the photo below. There will be lots of grease left on the cutting board, but you won’t need to save it for this recipe. Much more grease will come in the next step. 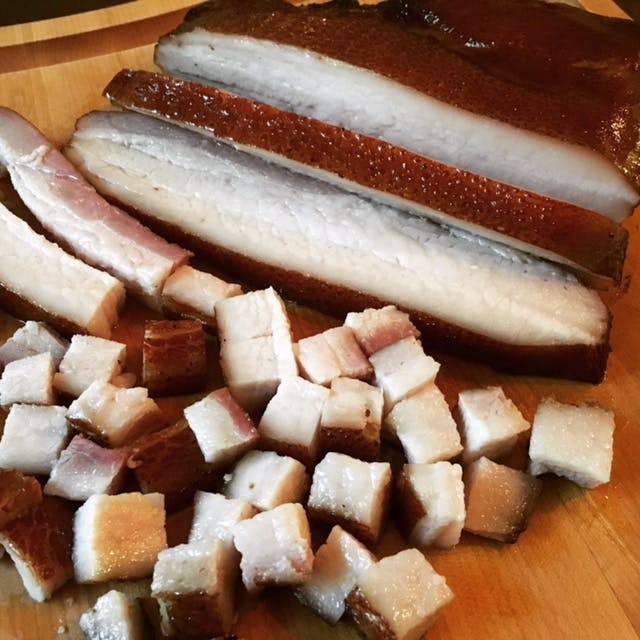 You can now add your favorite seasoning rub. For this recipe, I like a sugar-heavy one (look for some form of sugar as the first ingredient), so I added some Honey Hog from Meat Church. Toss in plenty of black pepper if you’d like to mimic Heim’s seasoning. Of course, you need plenty more sugar for bacon burnt ends, so I added some brown sugar and honey, and tossed it together in a disposable aluminum foil pan. The pan of cubed and seasoned pork belly went back into the smoker until the meat and fat were tender, and a nice bark had formed. This final smoking step can be done low and slow (which will get closer to Heim’s recipe), or hot and fast for something resembling candied lardons.

One thing you’ll need to plan for is all that bacon grease, because during the final smoke, the cubes of bacon will release a lot of it. If you’re using an offset smoker, just poke a few holes in the pan and the grease will drain off. Doing this in a Pit Barrel Cooker can be problematic because all the grease runs down into the fire, which creates way too much harsh smoke at best, and a dangerous situation at worst. I spooned the excess fat off a couple times during the cook. For the candied version, leave all the grease in the pan, and drain it off at the end.

Mix the kosher salt, brown sugar, and maple syrup. Rub the pork belly thoroughly and place into a Ziplock bag. Let it rest in the fridge for three to four days, flipping the bag once a day.

After curing, remove the belly from the bag and rinse thoroughly. Preheat a smoker to 350 degrees and smoke the belly until it reaches an internal temperature of 180 degrees. A 250 degree smoker will also work if you prefer low and slow, but I will take about two hours.

Remove the meat from the smoker and rest on a cutting block until it’s cool enough to handle. (If opting for low and slow in the next step, you can adjust the temp of your smoker down to 250-275 at this point.) Cut the belly into three-quarters inch cubes and place into a disposable aluminum foil pan. Season with rub and cover with brown sugar. (Drizzle with honey, if you like. I like the way it helps the browning process.) Mix well and place the pan of cubed bacon back into the smoker with a few holes poked into the pan to let the grease drain off (or spoon the collected bacon grease out of the pan during the smoking process). 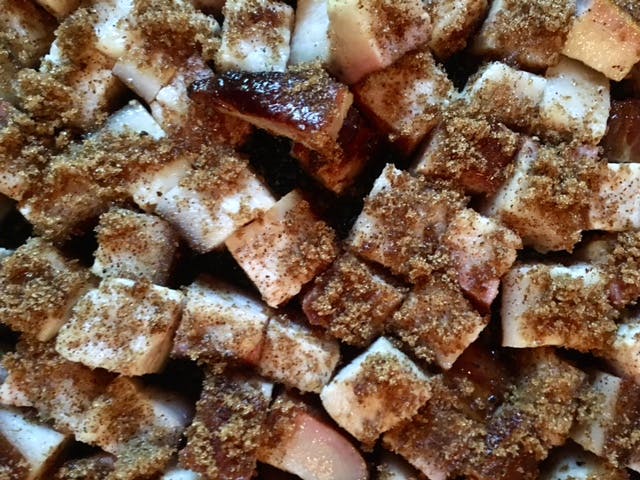 Smoke at 250 to 275 degrees for two or more hours, until the bacon begins to crisp on the outside and the fat is melted to a point that it bursts like a Gusher when you bite into it. Take a few out of the pan and test them to make sure they’ve reached the desired doneness, then cool until they’re ready to eat. 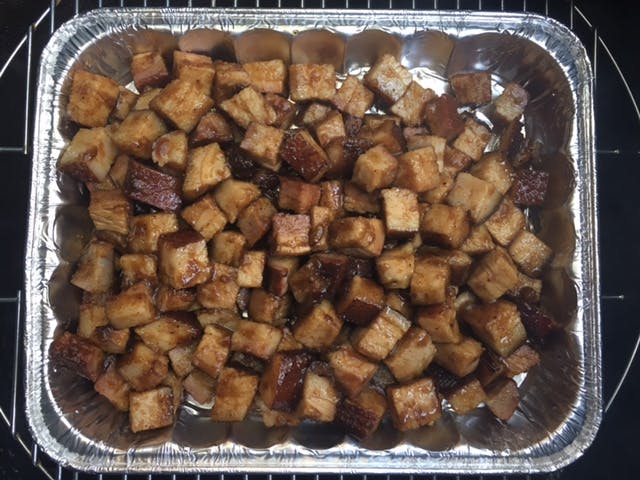 For the candied version, don’t poke any drain holes in the pan and keep the smoker at 350 degrees. The cubed bacon will boil in a vat of melted brown sugar and bacon grease until done. Stir every ten minutes, and they should be done in about forty minutes. Cool them on a sheet of foil so they can spread out, or you’ll be left with a ball of candied bacon. I guess there are worse things.

Alternatively, you could also save yourself all the work and simply head over to Heim Barbecue in Fort Worth and get the original version for $24 a pound. They’re worth every cent.