The experimentation never seems to end at Killen’s Barbecue in Pearland. Some days you can do a side-by-side taste test of different beef rib varieties, on others owner Ronnie Killen and pitmaster Manny Torres are serving flights of various smoked briskets. And when I stopped in last week they were having some fun with dry-aged brisket.

Dry-aging is a revered process in steakhouses that provides a signature nutty flavor to ribeyes and strips and fetches big money on the menu. Killen knows all about it from Killen’s Steakhouse in Pearland, and he turned to dry-aging to flavor to his burgers when he opened Killen’s Burgers, also in Pearland, earlier this year. He worked with Allen Brothers in Chicago (they handle his dry-aged steaks for the steakhouse) to acquire some dry-aged briskets to test in the burger grind. Once they got the right mix developed for the burger, “We had about fifteen extra, so I thought we should try them on the barbecue pit,” Killen said. Now they’re periodically on the special board at Killen’s Barbecue.

I tried a few slices last week, and they made for a unique barbecue experience. The smell of the fat hits you before you take a bite, which carries a flavor like parmesan cheese mixed with the best characteristics of smoked brisket. I’ve tried plenty of brisket varieties, and though a slice from an expensive brisket like Wagyu is delectable, this dry-aged brisket was a whole different eating experience. If you’ve enjoyed a dry-aged steak, then you know they’re a little less juicy than their fresher counterparts. It’s the same with the brisket. I wouldn’t call it dry, but it is denser with a more concentrated beefiness. “The texture is more like a steak,” is how pitmaster Torres describes it to prospective customers.

After 21 days of dry-aging, the briskets are a little smaller, and they cook a bit faster. The color of the raw brisket is a deep purple instead of red like the fresh briskets. They are aged on a shelf in the same room as other cuts, not hanging on the carcass like my mildly successful cook from earlier this year. I asked Killen if he had to adjust cooking variables for the new cut. Not so much. “Salt, pepper, and put it on there. That’s about it,” he admits. He said the first time they put it on the smoker it started to smell like dry-aged steaks on the grill, and he knew he was on to something.

I loved the dry-aged brisket, enough to go down the street to Killen’s Burgers. The standard burger is $7, but for a $2 up-charge you can get your patty made with a mix of ground short rib, brisket, and dry-aged brisket. The potato rolls are buttered and grilled, and the patties are ridiculously juicy. No condiments are required, but I can’t pass on a melted slice of American cheese. It was one of the best burgers I’ve had this year. 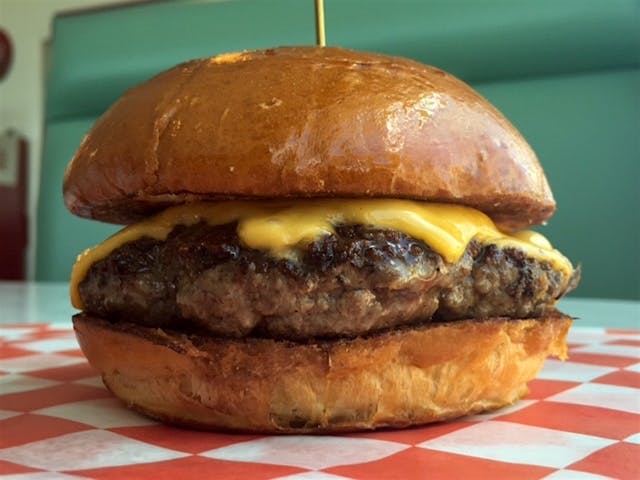 But if you want the smoked version, you’ll have to wait until Killen posts on social media to know when smoked dry-aged brisket is available at Killen’s Barbecue. At just $22 per pound, it’s not as expensive as you might think, especially if you just want a taste. But at this price it’s okay to make a meal of it.