Southwest of Austin is a farmhouse brewery called Jester King. They make unconventional beers with unique names and sometimes sinister looking labels. It’s considered a farmhouse brewery because they allow their beer to take in wild yeasts floating in the air during the brewing process. Their facility also looks a bit like a farmhouse. The building itself was an old machine shop in Victoria that the owners moved here to Ceres Park where they makes mostly sour beers with creative but non-descriptive names like Gotlandsdricka, Wytchmaker, and Atrial Rubicite. They also make a few smoked beers. 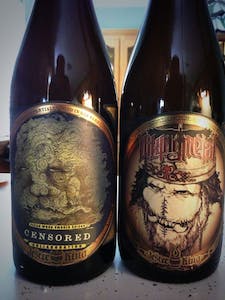 Their mission statement is simple. “[W]e seek to embrace nature and local terroir in our brewing, giving our beers a true sense of place. We draw water from our well at the brewery to make our beer and at times call upon naturally occurring yeast from the Texas Hill Country to shape our unique flavors.” They also make use of barrel aging on site like with Viking Metal which is their juniper flavored Gotlandsdricka aged in gin barrels. It is brewed with malt that is smoked with birchwood in house. Despite the smoked malt, the flavors of gin, or more specifically juniper, are at the forefront. A wallop of sour brought an audible “whoa!” to my lips upon the first drink, but that flavor does mellow while drinking. It may take a few more bottles to get used to those juniper flavors in a beer, but another smoky option from Jester King was easy drinking from the first sip.

Censored is the name of the beer that once was once Salt Lick. The brewery did a collaboration with the famous Salt Lick barbecue joint just a few miles from their brewing facility. Because of some arcane TABC labeling regulations they were not able to use the Salt Lick name on the label so you can find it in stores with the name Censored on the label covering the spot that once read Salt Lick. Silly.

The beer is a pecan smoked saison, and “a portion of the malt was smoked at the Salt Lick BBQ” per the unredacted original label. You can find some photos of the process on the brewery’s website showing an Oyler rotisserie pit being employed for the smoking. As for the beer, it was phenomenal. I drank a bottle with a small group of beer enthusiasts and we were left wanting more. The sour aspect was muted a bit by the true smoky flavor. The beer coats your mouth and that smoky flavor lingers nicely. If the Viking Metal tasted like a brewmaster’s experiment, this Salt Lick collaboration tasted like a well-refined finished product.