The sausage section at our local Kroger is well-stocked with dozens of sausages. Several weeks back my wife brought home a gift of the latest option: Nolan Ryan Beef Brisket Sausage. It was introduced to Kroger shelves back in July, and as Nolan Ryan Beef CEO Charlie Bradbury noted “We believe this is the first brisket sausage developed by a company and sold in mass retail.” In fact, I only know of two barbecue joints in Texas that offer an all-brisket sausage, and those are Longoria’s BBQ in Everman or Swick’s Bar-B-Que in Groesbeck. Plenty of others sell one of Slovacek’s many sausages from Snook, Texas, and that’s the facility where this Nolan Ryan sausage is made. 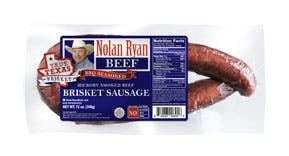 From the label it was obvious that it was all brisket. There is no pork or other protein in the mix. I didn’t expect to see barbecue sauce as the third ingredient, but it was time to eat. It can’t really compare to the homemade brisket sausages you can find at Longoria’s or Swick’s, but that’s a lot to ask from a pre-cooked grocery store sausage. The casing had a great snap to it, and it was a nice juicy sausage. The black pepper was prominent as was the sweetness of the barbecue sauce. It was certainly beefy, but as finely ground as it was I can’t say I recognized any brisket-specific flavor or texture. 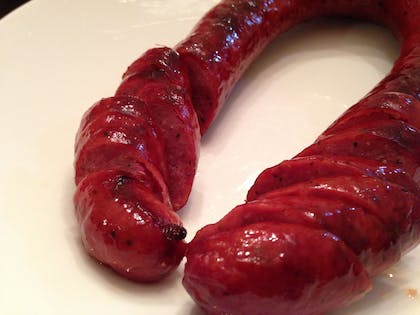 Currently it is only available at Kroger stores in Texas and Louisiana, or you can order three rings for $29 on the Nolan Ryan website. Maybe Ryan will include a recipe in his upcoming barbecue cookbook when it’s released next May. Until then, this brisket sausage is a fine option when measured against the other grocery store options alongside it.