It was the smoke that stopped me. The juice and fat from fifty-some-odd chickens mixed with mesquite charcoal to form a steady stream of smoke high above the roof line of Pollos Asados Los Norteños in San Antonio. I was scouting another barbecue joint and had stumbled upon the popular spot on Rigsby just south of I-10. As the smell of grilled chicken filled my car, I knew I had to double back.

My ignorance of this chicken shack’s existence is embarrassing in retrospect. Chef Jason Dady, co-owner of two local barbecue joints, told me over Twitter, “That’s pretty much the @FranklinBbq of the pollos asados world.” But the joint has recently been in the spotlight for different reasons. Back in January the restaurant was shut down by the City of San Antonio for three weeks while they improved the exhaust system in their detached smokehouse. Neighbors had complained about the excessive smoke, which brought scrutiny from the city. The story sounds just like last’s year so-called Austin barbecue ban. It’s all familiar, except the outcome. 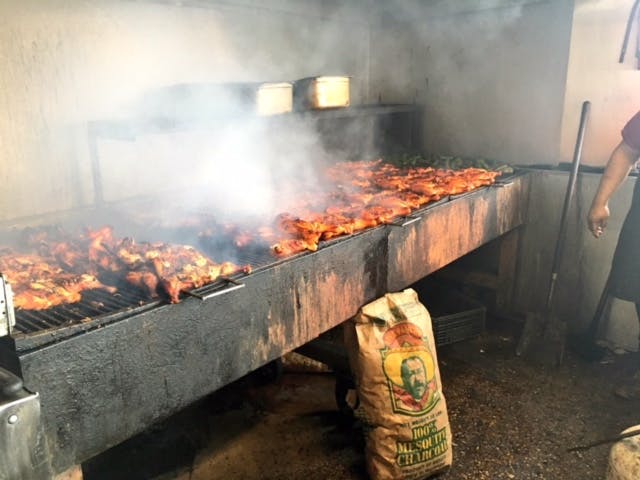 Local fans decried the move to close Pollos Asados Los Norteños, but unlike the response to the threat to Austin barbecue, there wasn’t a statewide outcry, much less a nationwide one. The expensive smoke scrubbers that we argued against in Austin were exactly what Los Norteños owner Frank Garcia was forced to install before he could reopen. Heck, if I’d heard about a restaurant generating too much smoke in San Antonio, I would have gotten in my car for an immediate road trip. That sounds like my kind of place, and it was. 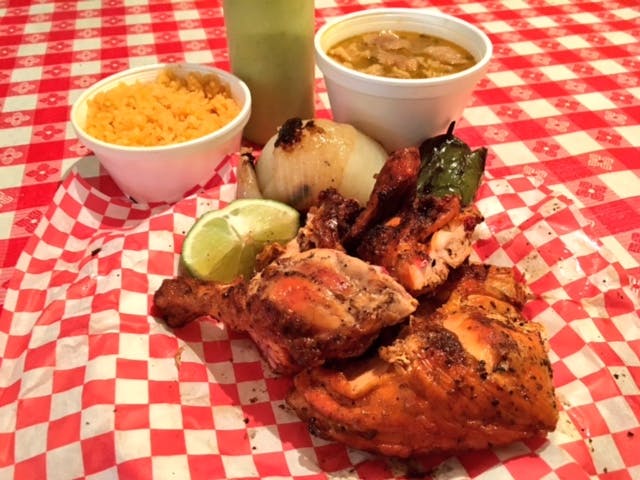 The chickens are marinated, then spatchcocked before grilling over mesquite charcoal. Served with rice, tortillas, a grilled half onion, and jalapeño, a half chicken is an incredible bargain at less than $8. The chicken is salty, juicy, and smoky. But despite the red color, I wouldn’t call it spicy; if you want a kick, you can add some of the highly revered green sauce or a bite of jalapeño. The onions seem simple enough, but their flavor is hard to describe. Rarely has a humble onion made a memorable impression, but here the cut side is black from the grill. It looks like a mistake, but when you peel it off layer by layer, you get just a little of that carbonized portion at the ends. Mixed with the chicken, green sauce, and a little lime, it makes for an incredible taco.

It’s great grilled chicken, but it is barbecue? I pondered this as I cleaned the meat off of a wing bone. There’s not a wide menu of barbecue cuts, but it is meat cooked over fire. It’s just charcoal, but that’s all they use at Cooper’s in Llano, and nobody is questioning their barbecue bona fides. Call it whatever you like, just get another half chicken to go. Otherwise, like me, you’ll regret not having more when you get home.