A barbecue truck in Austin is nothing new, but there’s plenty about Chico & the Fox that is unconventional. They don’t serve sausage, ribs, or even brisket. This truck is dedicated to pulled pork. You also won’t find a rustic smoker out back. Everything is smoked in an electric Masterbuilt cabinet smoker strapped to the tail of the truck. Yet even if they don’t have a pile of wood, the pulled pork heaped on their sandwiches still packs a smoky punch. 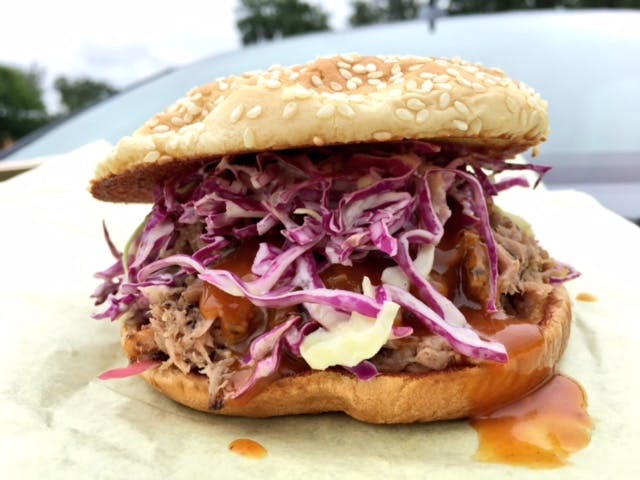 Like so many food trucks on a busy highway, Chico & the Fox is a blink-and-you’ll-miss-it trailer situated on the south side of 290. Instead, look for the most prominent visual marker: the big Rusty Mule sign.

Chico & the Fox is parked along with a few other trucks, but there wasn’t much action when I stopped in on a soggy Wednesday afternoon. Still, the full menu was available, a spread that includes several sandwiches of the pulled pork variety (and fried dill pickle spears, which I’m kicking myself for skipping). I went with two sandwiches: The Original, which was draped in a tangle of red cabbage slaw and house-made “tangy Carolina” barbecue sauce; and the Oink-N-Cluck, which trades out the Carolina sauce for a “sweet moonshine” version, and is topped with a fried egg and rests upon slices of candied jalapeños. 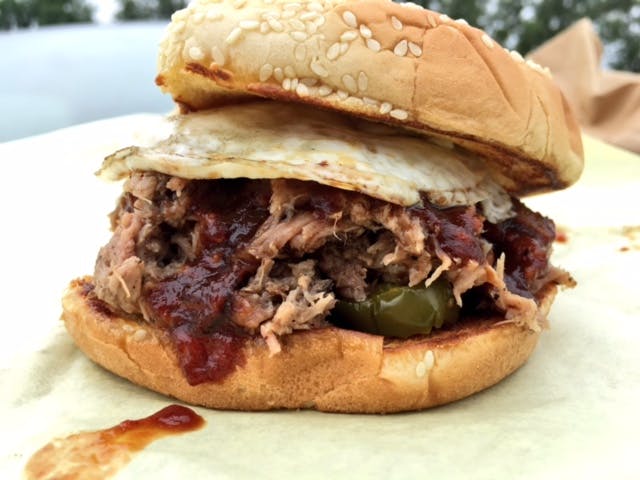 Both sandwiches were immensely satisfying. The buns are lightly grilled which helps with stability in these generously stuffed behemoths. The pork isn’t so much pulled as it is chopped, but not too finely as to enter into the minced category. I alternated bites to get some of the cool and crunchy slaw to tame the heat from the jalapeños. Both sauces were great although they must have found their Carolina sauce recipe in a mysterious third Carolina. It’s counterpart doesn’t exist in the barbecue joints I’ve visited in North or South Carolina.

Sauced pork from an electric smoker in Austin, Texas? I get the skepticism, but there is plenty of barbecue in Austin for purists. It’s good to have options, and what better to use in some off-the-wall sandwich combinations (there are also mushroom/swiss and ham/pineapple versions) than pulled pork? Brisket stands alone better than most any smoked meat, but pulled pork can easily be cast in a supporting role. It’s a canvas that can be painted with sauce and slaw. I’d argue (and Carolinians would agree) that it’s usually better with sauce than without, and Chico & the Fox is as good a place as any to put my theory to the test.