Hobbs credits their chicken supplier as a factor in the fried chicken’s taste. They use the same supplier as Chicken Express for both the fried and the smoked chicken, and deliveries come in halves that are less than two pounds each, so they don’t have to deal with monster-sized chicken cuts. But its also the unique process that sets the smoke-brined fried chicken apart.

For this recipe, the chicken isn’t smoked. They tried that, and the crust just doesn’t adhere as well to the par-smoked chicken. Instead, the backbone for the flavor in this chicken is smoked water. Hobbs told me, “With access to a smoker, it was a no-brainer. Let’s put the water on.” That’s right, they take a shallow pan filled with water and smoke it inside Miss Jessie (their J&R Oyler smoker) for about four hours. Once the water has acquired the proper brown color, it gets mixed with salt, sugar, and a few other spices to create the brine. 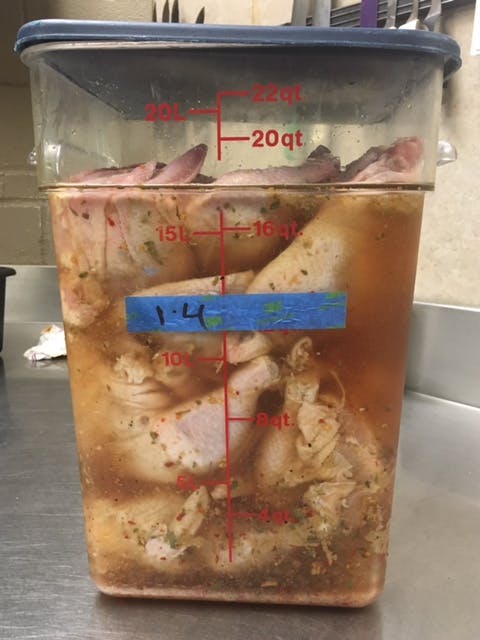 After brining overnight, the chicken is ready for frying. Although Hobbs is familiar with pressure frying from his days at Sissy’s in Dallas, Slow Bone uses a regular old deep fryer. Canola oil is heated to 290 degrees for the entire frying process, and the result is an incredibly juicy bird with a crunchy crust that’s tough to duplicate. 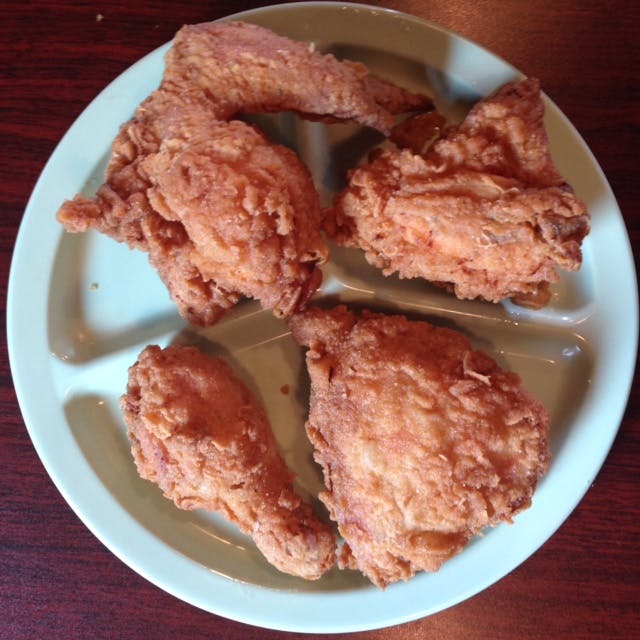 After many iterations of oils and flour mixtures, they made a break through with potato starch in the crust. It creates a crunch that can withstand a ride home if you want it to go. Baking soda and salt are the only additional seasonings, because, as Hobbs puts it, “We want the chicken to shine.” Get a taste of it naked, but I can’t keep away from the homemade sriracha sauce or the chimichurri that’s on the condiment bar.

How much smoke can really get into the chicken by way of the brine? Hobbs says he did one batch without the smoke brine, and the flavor was so dull he chose not to serve it, meaning the solution is integral to the chicken’s taste. “It’s not a super-strong hickory smoke,” he says of the brine flavor. “But it’s there enough that when it’s not there, it’s just another piece of fried chicken.” And this is no average fried chicken.