It’s become a fairly common sight in Texas: smoke rising from a little trailer parked in a gravel lot alongside the highway. But the Plantation BBQ trailer in Richmond was running a trailer long before it food trucks were de rigueur.

Richmond is southwest of Houston, about forty minutes from downtown, but if you’re heading into town, you’ll miss Plantation BBQ. Highway 90A splits in Richmond, and you can only pull over into the lot where the little trailer sits if you’re coming off of the eastbound lanes. And, of course, you won’t find flashing lights or a huge billboard. To find it, you’ll have to look for the small wooden signs leaning up against the trailer that read “Breakfast Tacos, BBQ.” You’ll have to be standing at the window before you can read anything that says “Plantation BBQ.”

Rose Garcia took my order with a smile while her husband, Lolo, attended to the steel smoker within the trailer. When I asked her how long they had been selling tacos out of the truck, she guessed since around 1987. She said they’ve been parked here in Richmond since the late nineties. The Garcias have smoked their meat with pecan for as long as Rose could remember. It’s what grows around these parts.

Breakfast tacos are part of the draw here, in part because there are so many options to choose from: bacon, pan sausage, barbacoa, smoked sausage, smoked brisket. Naturally, I was most interested in the brisket (I opted for a brisket-only taco to get a better taste of the meat), but barbacoa and smoked sausage were to hard to pass up.

Anyone who gushes over the sliced brisket alone is being generous, but together with the potato, egg, and salsa it makes for a harmonious combination. The pebbles of brisket suspended in the fluffy eggs complement the soft chunks of well-seasoned potatoes. With a little salsa (I liked it better than the barbecue sauce) and a fresh flour tortilla, it was a great taco. 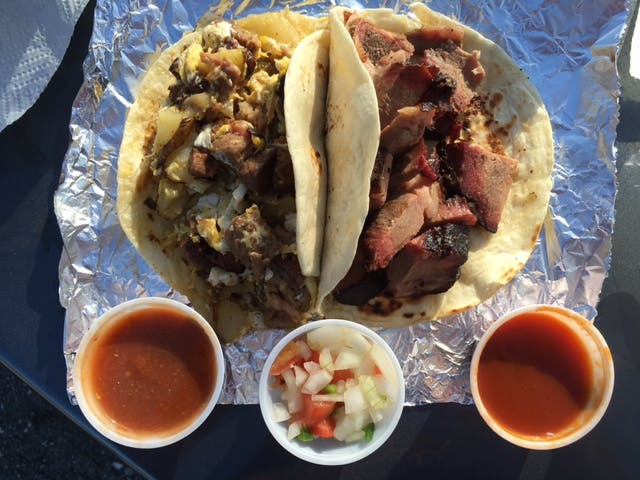 I’ve talked about my love for barbecue wrapped in a tortilla, so I was predisposed to like Plantation BBQ. A week after trying it for the first time, I stopped at another favorite barbecue trailer, Valentina’s Tex-Mex BBQ. They’ve become famous for essentially the same formula – smoked brisket and tortillas together, which made me wonder if there hadn’t been a trailblazer like the Plantation BBQ trailer, would their be a Valentina’s? In any case, it’s probably best not to think too hard about these things because a world without barbecue breakfast tacos is a world I don’t want to imagine.