Until recently, every smoked burger I’ve eaten has resulted in a contradiction of the palate. Smoky beef seasoned with salt and pepper hits all the positive taste receptors, but to trigger those you have to chew on a patty as dry as mesquite. It doesn’t take long to overcook a burger in a smoker, which isn’t a surprise because it’s a tool generally used to cook meat far beyond well done. That’s why every juicy bite of the Smokehouse Burger at Lakewood Smokehouse was filled with excitement that someone had struck the perfect balance.

This isn’t the burger they started with. Co-owner and pitmaster Mike Mullen said the original menu had a grilled burger made from ground short rib. The long cooking time messed with the kitchen’s efficiency, so Mullen reluctantly removed it with the first menu change. “Barbecue is a passion of mine, but I just love burgers,” Mullen told me. He hasn’t sampled many smoked burgers, but a catering customer asked him to smoke some New York strip steaks. Mullen served a reverse-sear steak that was started in the smoker and seared under the broiler, and he decided to apply the technique to a burger. Instead of the broiler, he finished the par-smoked burger patties on the flat top and the Smokehouse Burger was born. 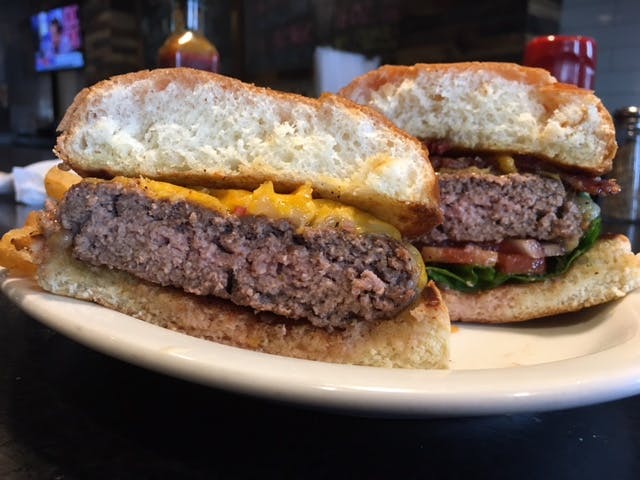 They smoke the burger until its rare, then hold it. It takes fifteen to twenty minutes on the mesquite-fueled J&R smoker, but the demand is hard to predict, so they smoke four to six patties at a time. If there’s a burger fresh from the smoker, it’s the quickest turnaround for a half-pound burger you’ve ever witnessed, but it could take a while if their supply of par-smoked patties runs low. They’ll ask how you want it cooked, but it’s impossible to serve a burger cooked this way at any doneness south of medium. Even those who love a pink burger will find this one juicy enough, and the added smoky flavor is enough of a bonus for me. 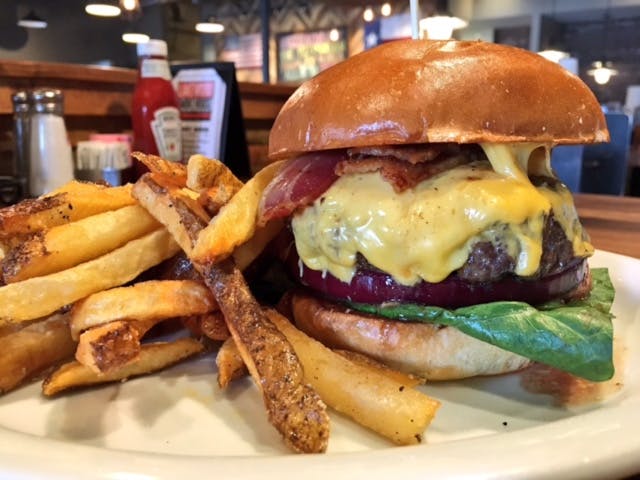 The burger still isn’t on the menu. I wouldn’t have even known about it if Nick Rallo hadn’t found it on the specials board outside, but you can get it every day. “It’ll end up on the new menu,” Mullen promised. Hopefully it remains as good of a deal as it is now. The hand-formed half-pound patty of 80/20 chuck comes with romaine, red onion and a thick slice of tomato. There’s also thick cut bacon from Rudolph’s Market in Dallas. It’s like a BLT with a cheeseburger in the middle, all on a buttered bun from Empire Bakery. All that comes with fries for $10.

No mayo or mustard comes on the burger. A bottle of warm barbecue sauce is on the side, but I didn’t like it with the smoked burger. Mullen suggests adding some mustard, which I’ll do next time, but it was still an excellent burger without it. I even tried it without all the veggies, and it was still a standout. There’s also a decision you’ll need to make on the cheese. The melty saltiness of American cheese usually makes it the best cheeseburger cheese (I understand this is a controversial statement). I tried American the first time, then I did a mix of provolone and cheddar on the second one (Swiss isn’t available), and I preferred the latter. The American cheese brought too much salt to the already well-seasoned burger, but no matter which cheese, the Smokehouse Burger is an achievement in smoked burgers. It’s the best one I’ve ever eaten.