Smokey Denmark’s has been known for making sausage in Austin for decades. Even up in North Texas, if you ask a barbecue joint where their hot links are from you’ll likely hear “Smokey Denmark.” While they have a storefront at their facility on East Fifth Street, links from Smokey Denmark were usually something that came to you on a delivery truck. They opened a barbecue food truck last year serving a full line of smoked meats, and they parked it right out front of their factory.

Bill Dumas runs the trailer. He was pulled from the factory side when they decided to open it up, and he was happy to use his barbecue chops to start slinging briskets. He certainly doesn’t want for nearby competition, being on the far end of the 78702. If you’re sharing a zip code with Franklin Barbecue, John Mueller Meat Co., la Barbecue, Micklethwait Craft Meats, and Kerlin BBQ, you’d better be good, and you’d better cook with wood. Dumas uses his Klose smoker to ensure the claim of “no spray-on smoke” painted on the trailer remains true. 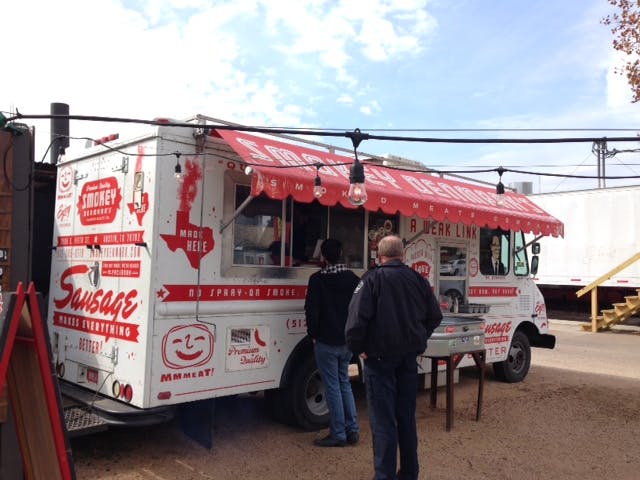 Rather than compete strictly on a brisket to brisket basis, Dumas employs a pan-regional menu with touches from all over the South. A peppery and decadently juicy pulled pork shoulder can be dipped (or slathered) with a tangy South Carolina mustard sauce. Tanned links of boudin made on site are smoked until the casings are crisp, and the half smoked chicken is coated in Alabama white sauce. On the latest visit the chicken got an unnecessary flourish of pico de gallo, which wasn’t there a couple months before. Both chickens were expertly smoked with tender, moist meat, and both times the too-thick sauce was overwhelming. Get it on the side, and enjoy the otherwise flawless chicken. 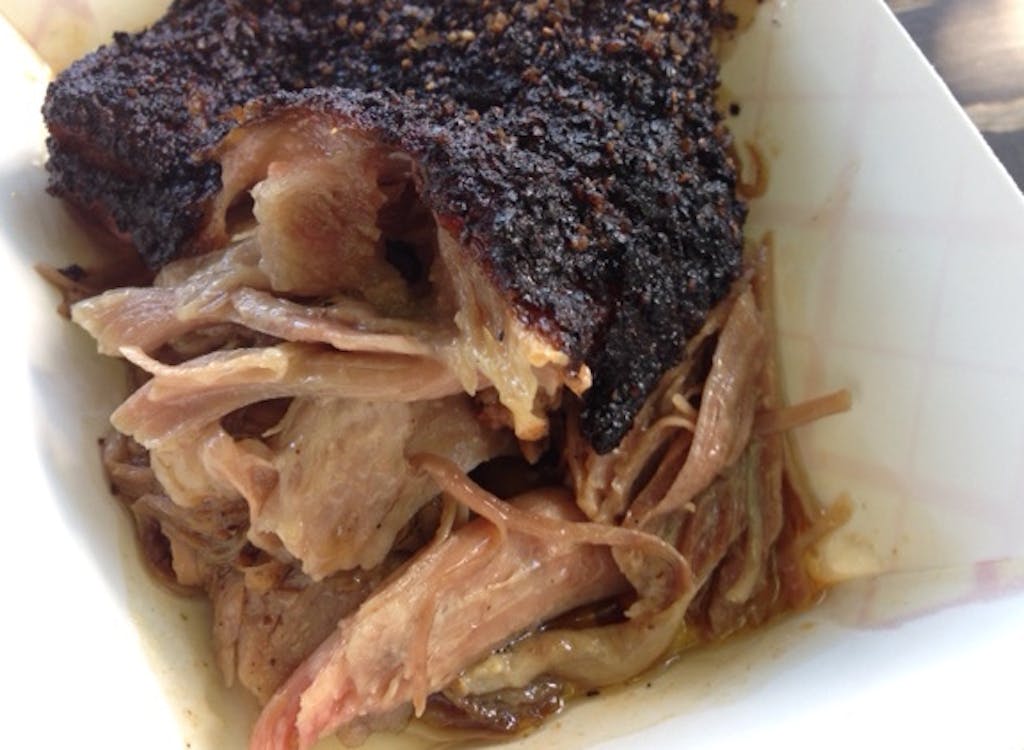 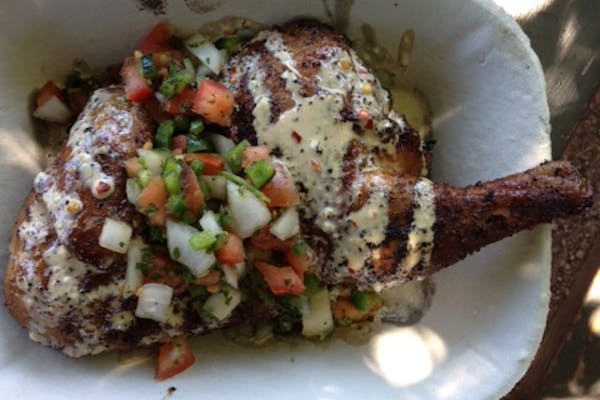 A note to pitmasters looking to jump into the suddenly trendy white sauce game: it was invented at Big Bob Gibson Bar-B-Q in Alabama. Watch a video (8:00 mark here) of them dipping their chicken into the vat of sauce. When they pull it out, most of the sauce drips off. It’s not mounded on like cake frosting. Do yourselves a favor and buy Chris Lilly’s book, and get the real recipe, then at least make a good copy. 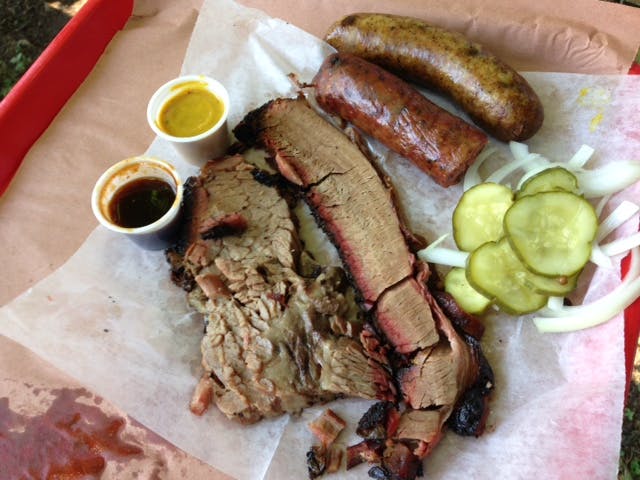 As for the beef side of the menu, it’s all Texas. The beef rib is available only on Fridays. It’s smoked until properly tender with just the right amount of seasoning. It won’t surprise you, and it won’t disappoint. Dumas took advantage of the adjacent sausage making facility and developed a beef link for the trailer. The 90/10 beef to pork mix is spiced up with red and black pepper. The spice and smoke come on strong enough to earn the name “hot guts.” 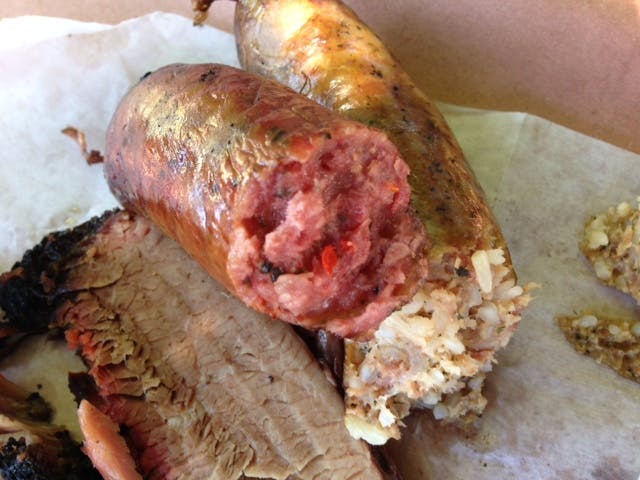 The brisket is good more often than it’s not. The latest visit brought forth luscious fatty brisket and respectable lean slices. Both had that good smoke, but could have used more seasoning. Plenty of silky fat was left on, so even the lean side was good after suffering from the stiff breeze of an industrial fan brought out to cool the stifling summer air. A previous visit wasn’t so successful when I got yesterday’s brisket reheated too quickly. Even if it wasn’t left over, they’d be better off embracing the excuse. The chewy bark and crunchy fat didn’t do much for the slices, and made even worse chopped beef. I salvaged a link of sausage from a sandwich of beef sawdust covered in liquid fat. Maybe the rainy night prior was to blame, but consistency is the key for great barbecue. 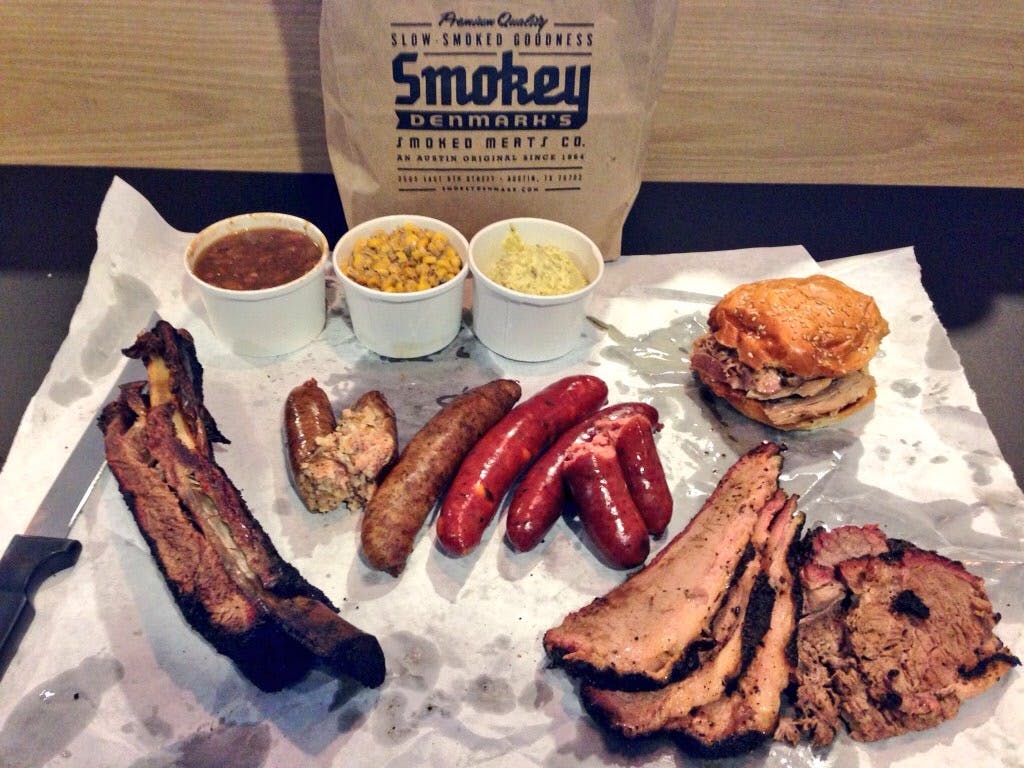 The sides here are better than most. Jalapeño creamed corn showed restraint in the cream and brought just enough heat. Beans are classic pintos with bits of onion and pepper, and plenty of black pepper for heat. The warm potato salad has an unexpected texture that I liked from the eggs, and a good twang from the mustard. Basically, you can’t go wrong with the sides here. The daily specials are usually worth exploring too. DJ Ridenour (who is leaving to open his own place in San Angelo) has a creative side that led to this week’s pork- and queso-stuffed poblano with a fantastic house-made charred salsa verde. 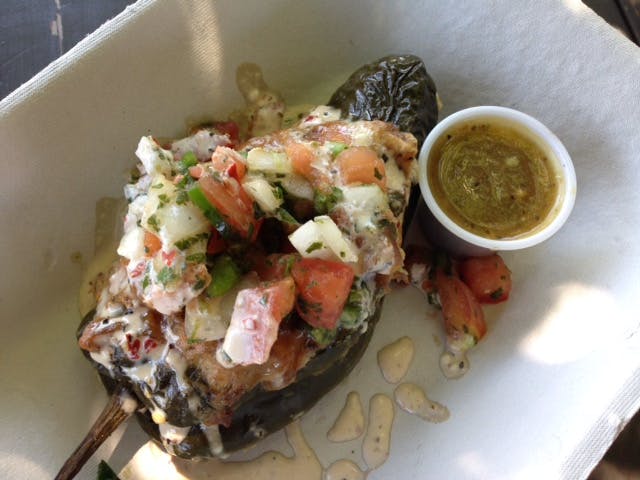 As someone always on the lookout for barbecue innovation, I love what they’re doing at Smokey Denmark’s. Dumas and crew are pushing the boundaries of what Texas barbecue can be, while also generally doing well by the classics. A stop here is a good way to spice up your weekday lunch rotation, and with a few tweaks it might become part of your smoked brisket rotation too.