With the rising cost of meat, specifically beef brisket, inexpensive barbecue is becoming rare today. It’s especially difficult to find a decent version of it. Finding $20 per pound brisket isn’t a challenge in Austin, Dallas, and Pearland, but that doesn’t fly in Corsicana. At Smokin’ Guns BBQ on the west side of town you’ll pay just $12.95 for a pound of hickory smoked beef, and a three meat platter with two sides is a whopping $12.50. Keeping things inexpensive is important to Michael Bates who has run this trailer parked in a used-to-be gas station lot since last year. When I asked about a crosstown competitor, it wasn’t quality that was top of mind. In reference to their $18 combo plate he joked “I think they’re trying to make it all on one customer.” 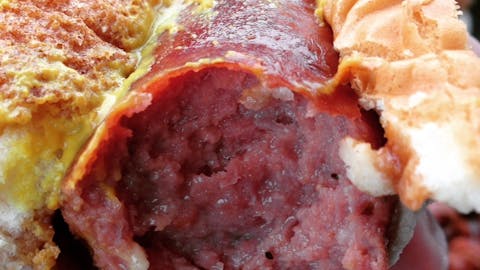 I realize that a good value doesn’t always make a good meal, but you can have both at Smokin’ Guns. They embrace the simplicity of the basic sausage wrap. A whole link of smoked sausage is wrapped in a single slice of white bread, topped with barbecue sauce or mustard (Bates suggested both, which was the right answer), and wrapped in foil. It would lose its appeal with a hefty roll, and the already thin profit margin on it precludes a standard to-go container. The bread was just barely holding together as I bit through the taut casing into the juicy meat. At $2 a pop, don’t expect a handmade artisan link, but it was still a masterpiece when the value is also considered. 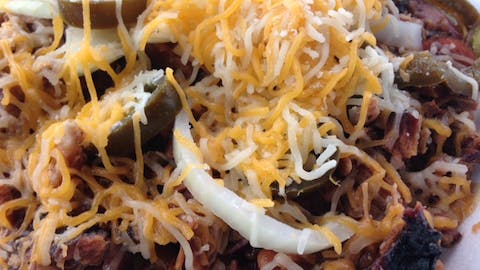 With too much acrid smoke flavor, and not enough tenderness, their sliced brisket isn’t going to give any of the big names a run for their money. However, chopped up as the filling in their stuffed baked potato (their most popular menu item) or the “Loaded Gun” – a loaded Frito pie – it works well. I didn’t try the potato (I’m only one man), but the latter was a generous helping of crunchy chips, beans, sliced sausage, pickled jalapeño slices, onions, and cheese. That cheese is straight from the five pound bag of cheddar/jack, but freshly grated sharp cheddar doesn’t result in a full meal that costs $7.50. It wasn’t a revelation, but it was well made, and I ate more of than I was prepared to do. 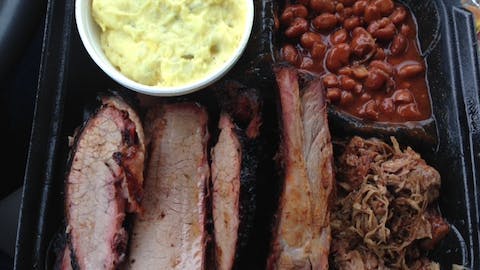 The cheap price stops being a value when considering the pork ribs. They’re just not very good. The surface was splotchy from too much rub and not enough airflow over the ribs (a downfall of their style of Ole Hickory smoker). The lack of bark didn’t mean a lack of smoke which overpowered any other flavor. The slick, black residue stained my fingers. Opt for the juicy shredded pork which was a few notches better.

I’d be happier if they didn’t use a boxed vanilla pudding mix in their banana pudding, but they didn’t cut any corners on the sides. The ranch style beans were basic but good, and the potato salad was creamy with a good mustard tartness, and some crunch from the diced pickles.

I’m not saying good value is everything, but smoking prime briskets and charging $20 per pound for them in a small town isn’t going to keep the lights on for long. The fact that Smokin’ Guns can still put out barbecue that I was happy to eat (for the most part) shows they can make do a little more with a little less when it comes to the quality of the ingredients. With a few tweaks, I might be able to recommend them at any price.