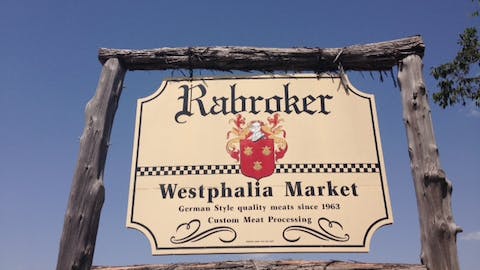 The Rabrokers have been selling their family recipe German sausage out of Westphalia Market since 1963. The tiny town of Westphalia sits between Zabcikville and Lott on Highway 320 (about twenty minutes east of Temple), and the market is a great reason to take a detour. They make several kinds of sausage, but I was interested in the Famous Westphalia Sausage recipe.

Pat Rabroker runs the place now. The last name may be familiar from a story on Czech sausage where I talked with his brother Tim Rabroker who owns Slovacek’s in Snook. Don’t be confused, Pat’s sausage is all German (for more on German sausages). It contains 60% pork, 40% beef, salt , and black pepper. There’s no MSG, no sugar, and no curing agent. It’s the model of sausage simplicity, and is available in both a fresh and a smoked version.

For the smoked version, Pat told me he keeps the hickory-fueled smokehouse at about 175 degrees to bring them up to temperature slowly. It takes about ninety minutes to complete the process. He aims for the minimum internal temperature allowed, 152 degrees, and insists the slow smoking and low temperatures keep the casing from getting tough.

Many barbecue joints purchase sausage that has already been smoked and add their own smoke from the pit as a final step. Thankfully, there are still some out there who make their own sausage in house, but another great option is to buy a raw sausage from a talented sausage maker. I picked up a package of both the raw sausage and the smoked to compare them. I wanted to see how two different sausages of the exact same recipe (one just being pre-smoked) responded to my home smoker.

I smoked them both at around 3oo degrees for about thirty minutes (until they reached 165 internal temperature). You can see the difference in the color of the casing with the pre-smoked version getting much more brown, but what about the taste and texture?

After tasting them both, the raw sausage took on the flavor from my smoker a lot better than the pre-smoked version. Pat Rabroker wasn’t surprised. “Once you get to about 150 degrees, the sausage just doesn’t take on anymore smoke.” The pre-smoked version was already “full” of smoke. The casing was tougher, and the stuffing was drier on the pre-smoked version as well. You can see the well-defined smoke ring on both of them, and the gray color of the interior. This is a trademark of sausages that don’t have a curing agent added to them that will turn them pink.

Both sausages were fantastic, but I was amazed as the distinct difference in flavor and juiciness. In every way I preferred the raw sausage, which goes to show that pre-smoked sausage are probably best suited for the boiling pot. If you’re serious about smoking sausages, start with the raw stuff.

For your sausage explorations:

If you’re in Westphalia, then you might as well stop in nearby Zabcikville for another great sausage shop: