Always seeking a route away from the interstate, I found myself driving the back way into Mathis, Texas on FM 666. When I saw that the state had failed to skip that number when naming farm-to-market roads I just had to take it. It was a humorous detour until I was a few miles south of town and smoke covered the road. There was a grass fire and the smoke was so thick I could barely see the road. Safely on the other side I saw a firetruck screaming toward the scene. There was no need to call 9-1-1, but I kept my eye on the rearview for any glimpse of the Devil.

This thirty-eight mile stretch of South Texas asphalt ends in Mathis where it changes names to San Patricio Avenue. Along that street in the middle of town is Smolik’s Smokehouse. Owner Gail Smolik says the town doesn’t embrace the ominous number of the road that connects them to towns like Bishop and Banquette (pronounced Ban-ketty). Gail and her husband Mike came back here to her hometown of Mathis to open this location of Smolik’s in 1989. It was the southern most outpost of the the Smolik’s family chain that started in 1928* with the opening of the first Smolik’s in Karnes City by William H. Smolik**. His son George took over the original location, but sold it in 1992. Another son Erwin “Big John” Smolik branched out to Kenedy. That location closed upon Big John’s death in 2011. The Smolik’s in Cuero was started by the other son Bill Smolik. After Bill passed in 2007 his son David took over, and it’s still operated by David’s wife Camille. 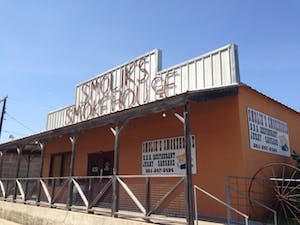 Mike Smolik is also Bill’s son, and he’s going strong here in Mathis. There are plans for second Smolik’s location to open later this year out closer to the interstate. Gail says the walls will be decorated with murals showing the history of Mathis and of the Smolik family. A big part of that history revolves around the family’s Czech sausage recipe, and there’s a reason. It’s fantastic. Beef and pork is mixed with black pepper and plenty of garlic, then smoked over hickory. The casing have a great snap and the links are ridiculously juicy without being oily. Over a century of sausage makers in the family will get you results like this. When I asked the staff what in particular made this a Czech a sausage, the reply was sly. “A Czech made it.” 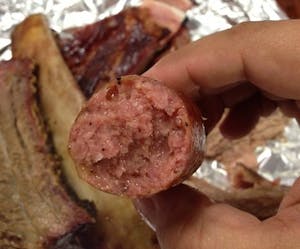 Also smoked over hickory is the excellent jerky found in the meat case. In fact there are two sides to the joint. To the right of the register is the barbecue line, and on the left is a whole case of meats, sausages, jerky and even house made kolaches. 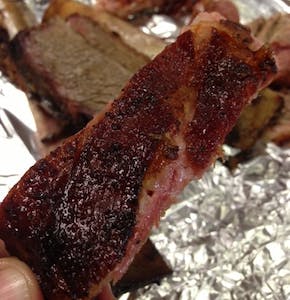 The rest of the menu is smoked in a Southern Pride with mesquite. The brisket was average at best. It was smoky, but dry and undercooked. The pork spare ribs are a much better option. A well formed bark has some sweetness to it while the meat beneath is nice and tender. Paired with a side of their meaty stewed cabbage, these would make a great meal on their own. A special of beef ribs caught my eye, but at $12.50 for the plate I assumed that meant beef back ribs. Instead, I got the last giant beef short rib of the day. That’s quite a value. The meat had a great blend of simple seasoning and smoke. It would have been a great beef rib if left in the smoker for another couple of hours. It was impossible to pull apart and I needed all of my jaw strength to cut through the unrendered collagen. I brought it home and simmered it with beer and chili powder for a few hours to make one heck of a leftover Frito pie. 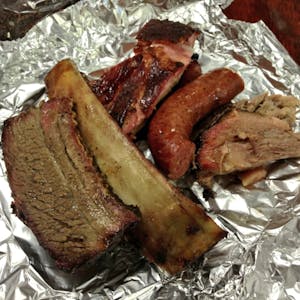 The Smoliks are no doubt an important family in the history of Texas barbecue. Mike and Gail are carrying on those Czech traditions with pride, but the next generation is a question mark. They all have professions outside of barbecue, but Gail Smolik has hope. The grandchildren, she said, have shown some interest. They’re still very young, but hopefully those murals at the new place will teach them the importance of their family’s traditions. That sausage recipe is too good to squander.

*Gail Smolik noted that the year 1918 had been reported often for the opening of the first Smolik’s in Karnes City, but she’s certain that the original store opened in 1928. Curiously, their website also uses the 1918 date.