Memphis has the baby back rib. Chicago has rib tips. St. Louis even has a style of ribs named after its fair city. But spareribs are what you’ll get in Texas when “ribs” alone are listed on the menu. For the most part, we find baby backs too dainty, Chicago-style too wanting, and St. Louis-style too willing to waste a perfectly delicious tip (the meaty nub attached to the end of a sparerib).

How did spareribs capture our state’s attention and tastebuds? Well, that’s just the way it’s always been. If you go back far enough, that might not always hold true (whole hogs were common in community barbecues, so those ribs weren’t served separately), but as long as we’ve been cutting up hogs before cooking them, the sparerib has been popular. (Also, there are variations on how spareribs is spelled. We’ve decided to adopt the single word.) There are mentions of the sparerib in both the San Antonio Texan and Galveston Weekly News in 1855. In 1870, a recipe for sparerib pie appeared in the Fort Worth Daily Gazette with detailed instructions that still somehow managed to leave out what to do with the bones.

Yet rather than being a regular item at the meat market, the sparerib was more of a cult classic. It was associated with wintertime cooking when it was hog killing time. When the animal was slaughtered, the meat had to be cured, confited, ground into sausage, or eaten right away. Cuts like hams and bellies were sent to the smokehouse where patience was a requirement, but spareribs were typically enjoyed immediately. Think of them as a hog slaughterer’s treat. Once the belly was removed, the ribs beneath it were considered leftovers to that cut (hence “spare ribs”). There wasn’t much you could do with the leftover spareribs but cook them and enjoy the scant meat between the bones. Great sparerib feasts would be enjoyed when farmers came together to slaughter their hogs for the winter.

But as with any cult classic, not everyone loved it. Robert Carlton Brown penned a humorous take-down piece aimed at the sparerib in a 1908 issue of the Fort Worth Star-Telegram entitled “A Few Spare Thoughts for Those Who Have a Little Spare Time.” He called the ribs “callous and ossified” reminding the reader that “it takes a very systematic search to find a bit of meat among the bunch of bone.” Toward the end of the piece (shown below) Brown repeats the butcher’s motto of “spare the rib and spoil the profit.”

That wasn’t the only biblical connection to spareribs in that time. In my research, I found that nearly a third of the old newspaper clippings that mention the cut used the term as a dig at women. That Eve was created from Adam’s rib meant women were nothing more than a “spare rib,” a reference you can see below in a joke published by The Daily Hesperion.

A humorous “love” song called “A Spare Rib From the Butcher Shop of Life” was even included in the musical “September Morn,” which was popular release 1914. The song was about a man’s search for a woman.

Back to the business side though. That “spoil the profit” motto reminds us why spareribs may have had such little meat on them back then. The belly meat that was taken off the bones went to bacon. Bacon could be cured and smoked giving it a long shelf life. That made it more valuable to farmers and butcher shops alike. A 1914 ad in El Paso for the J. H. Nations Meat & Supply Co. listed spareribs for just $0.17 while bacon fetched $0.40 per pound. It just made economic sense to cut spareribs down to the bones, which meant that in the early part of the century, spareribs were nothing but shiners.

The sparerib’s appearance on barbecue menus dates back around the turn of the century, when selling barbecue in meat markets and restaurants became the norm, and, just like with smoked brisket’s history, El Paso led the trend. In 1898, an ad in the El Paso Daily Herald included spareribs along with other “barbacued [sic] meats” at New Market. Melvin Meat Co., also in El Paso, advertised their smoked spareribs in 1911 and in 1917. Elsewhere in El Paso, pitmaster I. Stern was cooking “barbecued spare ribs” as well as “any kind of meat you want, cooked to a delicious brown in our barbecue pits.”

Spareribs had taken hold on menus across Texas, but they weren’t meant for polite company. To get at the meat, a knife and fork wouldn’t suffice. Getting the most out of a sparerib meant manhandling the meat. In 1920 the Dallas Morning News noted that “No one can properly appreciate spareribs and backbones unless courageous enough to get his chin and cheeks greasy.” A letter was even sent to Emily Post asking about sparerib etiquette. She responded that unless you were at a picnic, “you must not pick up spareribs in your fingers,” and further advised to use a steak knife. Maybe she’d never eaten a sparerib.

It didn’t much matter to meat market and barbecue joint patrons who weren’t sitting down to white tablecloths and linen napkins. They enjoyed all sorts of hard-to-eat cuts at places like Lowry’s Grocery, Market & Deli in Breckinridge, Texas, where you could enjoy “Barbecued pork ears, snouts, tails, feet, and spare ribs,” in 1929. The dish was also frequently associated with drinking. Just after the repeal of Prohibition in 1933, the Fort Worth Star-Telegram noted that “Barbecued ribs, always popular in West Texas, have grown increasingly so with the advent of beer, ranchmen say. A group of Midland cattlemen had a barbecue and a keg a few hours after the keg’s contents were legalized.”

Spareribs continued to dominate the pork side of barbecue menus throughout most of the century. I could only find one ad before the mid-sixties that mentioned any other kind of rib, and even it was vague. In 1947 Cain’s Hitchin’ Post touted their “Genuine Hickory Barbecued Ribs Heavy with Luscious Meat” in the Dallas Morning News. They were described as “Not Spareribs but a new rib for Dallas. A new taste sensation better than spareribs.” It didn’t say what they were, but maybe they were baby back ribs, cut from the loin a little higher on the hog.

Before baby backs were called baby backs, meat market advertisements referred to them as loin back ribs. The term “baby back” didn’t get codified into our collective barbecue minds until Tony Roma’s planted it there in the eighties. It was the restaurant’s signature cut and appeared in all of their advertisements, but until then, those bones were always attached to the loin. A whole loin was bone-in without question, or it was cut into pork chops.

The introduction of the baby back rib came just before the now-popular St. Louis-style rib. In 1983, a new series of meat specifications were released by the USDA. Steve Olson was one of the authors, and he told the St. Louis Post-Dispatch that they needed a name for the cut of rib with the rib tips removed. Olsen said, “We did a survey to find out if there was a consensus for what this was called,” and St. Louis ribs was the most common response to their survey. The IMPS from that point on listed cut #416 as Spareribs and #416A as Spareribs; St. Louis Style (as we’ve discussed before). Advertisements mentioning St. Louis ribs in Texas also didn’t star until the eighties, corroborating Olson’s timeline. Spareribs were no longer alone as the only choice for ribs.

Even with these new and tempting cuts of ribs, spareribs have remained the primary choice for pork ribs at Texas barbecue joints. Even when baby backs are offered, it’s usually alongside their big brother. I personally think spareribs are the perfect cut. They’re meaty with plenty of fat, and the attached rib tips make for a nice treat of meat and fat if you’re willing to work for it. That, and they’re cheaper that baby backs or St. Louis ribs. Maybe they’re not so spare after all. 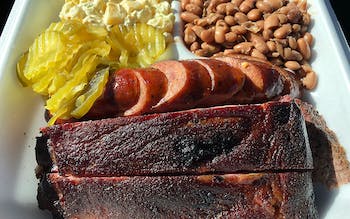 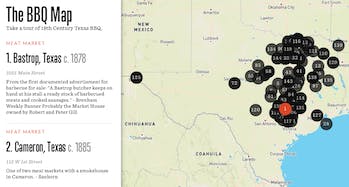 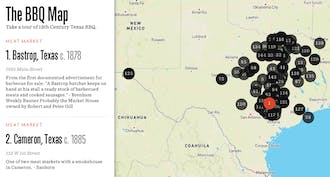 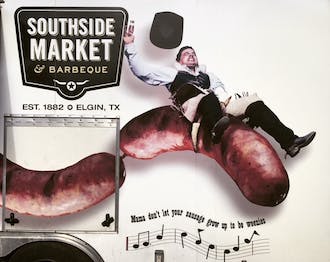 The Transformation of Southside Market