In 1908, German immigrant William Specht bought some property outside Bulverde, Texas, about twenty miles north of San Antonio. He took over the operation of an existing store, and by the early twenties erected a building that, according to the Bulverde Standard, was originally a dance hall. Being next to Camp Stanley it was popular as a watering hole for the nearby soldiers. Those services weren’t always welcome, and on January 24th, 1918 Specht was arrested for “selling intoxicating liquors within a five mile radius of Camp Stanley.” He posted a $500 bond, but you’ll get off easier if you belly up to the bar today (it’s still the original one). The Specht’s Store is alive and well nearly a century later. 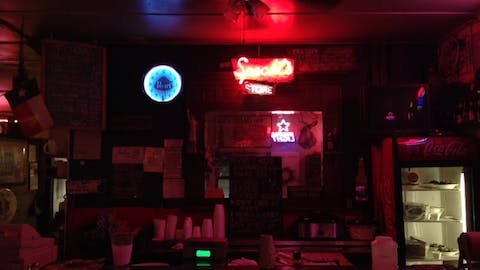 Post oak smoke wafts around the building toward Specht Road. A chalkboard sign on the front porch welcomes diners and live music fans, and a barbecue menu from new owner Thurman Love shares the day’s specials. Love bought the building along with Dave Dickson in February, and they fired up the steel offset pit that Love rescued from an estate sale. Business is brisk on the weekends when folks don’t think twice about making the thirty minute drive from San Antonio, but on a dreary Thursday evening I was the only customer.

I asked for a little of everything and Love got to slicing. He was most excited about the daily special of brined, smoked turkey. I had great flavor and good smoke, but was a bit dry despite the brining. I was looking forward to the homemade sausage. Both the house and jalapeño varieties had a fine grind and a chewy casing. Neither were very spicy, but both had a nice smokiness. 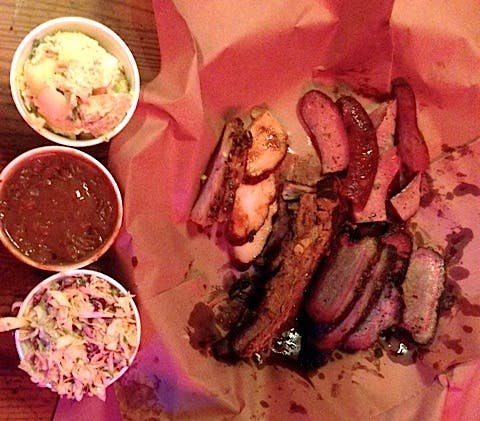 The spare ribs were huge. Just one was about a half pound. They’re finished in a foil wrap along with some of the sauce, so they’re sweet and incredibly tender.

Love was a chef in Bandera and San Antonio before branching out into barbecue, so the quality of the homemade sides wasn’t surprising. Quihi slaw was crunchy with a light dressing. A hearty bowl of pinto beans had an addicting depth of flavor, and the chunky potato salad toed the line nicely between sweet and mustardy. 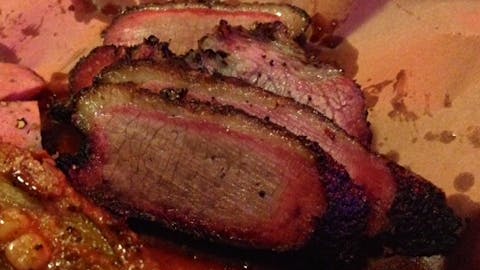 The brisket was uneven. It had too much bounce when it hit the cutting block just behind the bar. Love was happy to oblige when I asked for a mix of fatty and lean. A thick slice off the fatty end was so undercooked I could hardly bite through it. The lean side was an improvement. It was smoky, well seasoned, and relatively tender with a nice line of fat on top. Love uses Certified Angus Beef, so the briskets should be well marbled, even on the flat side. This one was a bit dry, but that’s nothing that couldn’t be fixed with some slower smoking. 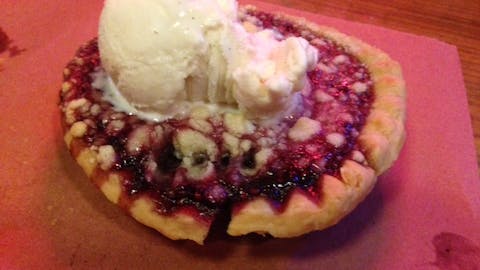 Dessert options included dinner plate sized chocolate chip cookies, chess pie, or a four berry cobbler. The cobbler was served within a single serving pie crust along with ice cream. It was fantastic. Too much sugar can overwhelm the natural sweetness of the berries, and this one was subdued. There was another flavor I couldn’t place until Love explained that he reduced the berries in merlot wine.

The Specht’s Store is one of those places that make you feel more relaxed just by walking through the doors. It’s got a rich history, a great story, and a dedicated restaurateur at the helm in Thurman Love. The building alone makes this place a destination worth seeking out, even without the cold beer and live music. With a few tweaks it could be one heck of a barbecue destination too.