The four meat sampler plate should become a staple of every self-respecting BBQ joint. The idea of piling a plate with multiple proteins, and diggin’ in without the distractions of cole slaw, pinto beans or anything else to slow down the ingestion pleases me. The folks over at Stanley’s seem to agree with me.

A friend from LA wanted a taste of some good Texas ‘cue so we headed out to East Texas in search of some transcendental smoked flesh. I provided the expertise and the route, he provided the rental car and the photography. At Stanley’s we bellied up to the counter to place an order for a plate overflowing with ribs, hot links, sliced brisket and pulled pork. In addition, we just had to order the “Brother-in-Law” sandwich based on the name alone. At this joint meals are prepared in the kitchen rather than right on the counter, so we sat in a booth sipping sweet tea until our order was called. 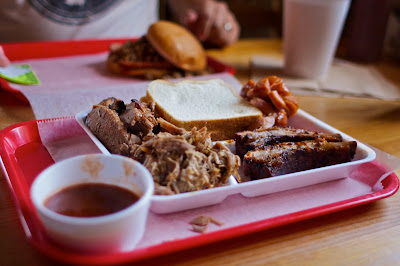 A plate full of meat is a beautiful sight, but we dove in shortly after admiring the visual affect. Hot links were underwhelming slices of slightly spicy pork sausage…not a great start, as hot links seemed to be a misnomer here. The ribs had a sweet tangy glaze applied lightly to the dark smoky crust. These baby backs weren’t very meaty, which allowed the smoke to penetrate the full depth of the rib. The tender meat also had a good level of moisture, some of which can be attributed to the glaze. Although sauced, these ribs were enjoyable. It should be noted that the liberal use of sauce is generally what separates the East Texas style from the Central Texas style. This wouldn’t be the last time this was encountered on this trip.

Brisket had a more traditional preparation with a light rub leading to a decent crust and a good smoke line. The meat was moist, but the ease with which it broke apart in my hands was evidence that it may have been overcooked a bit. Also, the smoke and flavor was there, but the fat was missing in these too-lean slices. Finally, the wholly untraditional pulled pork was the best item on the plate. The mixture of tender shredded pork, black bits of crust and small bits of rendered fat came together with the nutty flavored sauce that was applied with restraint. We thought it may actually contain some asian peanut sauce. Odd…but good. 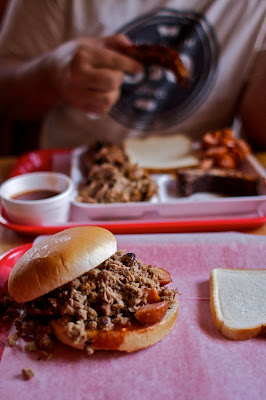 The final item was the Brother-in-Law sandwich. Chopped beef, sliced sausage and American cheese were piled atop a buttered bun and doused with the house sauce. Hot sauce was available on the side, but eaters were warned that the staff would no longer replace food that had been doused with this screaming hot sauce. Squirt at your own risk. Before taking the sauce challenge, we took a few bites, and all of these flavors came together quite well. I had doubts about cheese and brisket, but the sausage buffer was key to this flavor profile. Adding the grainy hot sauce added a pleasant kick without much pain.

Stanley’s may not have any one outstanding traditional Texas BBQ item, but judged on the whole, this joint is worth a stop.

This Boutique Ranch Focuses on Grass-Fed Wagyu, Tasty in Burgers or as Steaks