Austin has traditionally been a jumping off point for barbecue trips to famous towns like Lockhart, Luling, Taylor, and Llano. Great barbecue seems to surround Austin, but the city has been getting a reputation of its own as a barbecue destination. Some have even started to question if there’s a need to trek the forty-five minutes from Austin to Lockhart. Franklin Barbecue started these questions, and the Austin crowd got louder after John Mueller’s return. The opening of Stiles Switch may just seal the deal. While matching the experience and ambiance that can be had at those hallowed barbecue temples can be difficult, there’s now no reason to leave the city for great smoked meat, whether you’re in north, south, or central Austin.

I arrived late on a weekday after pitmaster Lance Kirkpatrick had completed his day’s work. Lance had worked for a long time at Louie Mueller Barbecue (and is even referred to as Bobby Mueller’s “right hand man” in this Food Network video), but his time there didn’t end well. He tried his hand at upscale dining in Taylor for a short time, but it wasn’t too long before rumors began to surface that a Louie Mueller alumnus would be opening a joint in Austin. A bit of a controversy leapt up when Wayne Mueller asked nicely (through a cease and desist notice) that Stiles Switch not use the Louie Mueller name when promoting the new joint. It seems that Lance and the crew, with a little help from their Klose pit “Megatron”, are beyond the controversy. 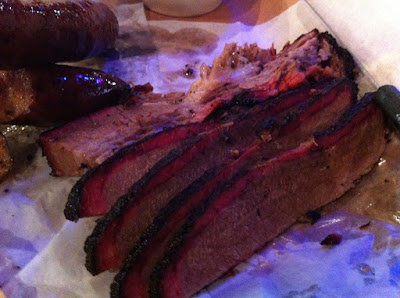 When ordering brisket here, I’d suggest skipping the lean meat altogether. It was so dry it had grown fuzz. The smoke and seasoning were there, but go for the fatty cut if you want moist and succulent meat. If you know the Louie Mueller style, then you won’t be surprised by the heavy black pepper seasoning. I was certainly pleased with it. The beef rib was equally well executed, but not to the level of John or Wayne. While smallish, the meat was well smoked, fat perfectly rendered out, and thick dark crust provided a nice textural counterpoint to the tender meat.

Three sausages are made in house, and all have notable qualities. The all-beef Thorndale had exemplary smoke and texture, but I just like a little pork fat in my sausage. Pork lovers who can take some heat will be well served with the jalapeño-cheese sausage which is a fifty-to-fifty beef and pork mix with a spicy kick that’s not timid. For me, the best of the bunch was the Switch original. The casing had a perfect snap, and hot fat rushed into my mouth when I bit into it. It’s a beef link with 15 percent pork and 100-percent-perfect seasoning. Not too salty, just enough black pepper and perfectly smoked. If I’d had a better link than the one I had on this evening, I’m not sure where it was. 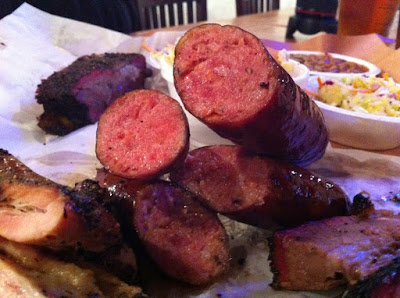 The pork ribs had that same black pepper rub. The tips on the spares was overcooked and chewy, but the meat right at the bone was moist and tender. A meatier rib would have been welcomed. 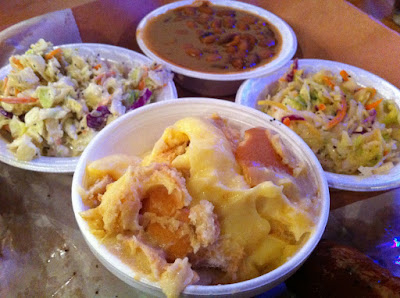 Sides aren’t an afterthought but also not particularly memorable. Two slaws, vinegar and mayo based, are available. Vinegar slaw with jicama was soggy and missed the pop that I expected from the vinegar. The chopped mayo slaw was well executed, but beans were too watery. Homemade banana pudding was a good way to end the meal.

After being open for less than two months, it sounds as if the neighborhood is embracing this new joint. Nice touches like having multiple Austin-based breweries on tap show that Stiles Switch is embracing their city as well. Austin should be proud to have them in the barbecue mix.