Five years after opening, Texas Monthly Top 50 barbecue joint Stiles Switch BBQ & Brew is expanding. The original isn’t going anywhere, but a taste of their excellent beef ribs will be a lot closer for barbecue fans in Dripping Springs around this time next year. The build-to-suit project west of Austin will also house the new location of Pieous at the corner of Highway 290 and Nutty Brown Road. The project, Endeavor at Belterra Village, will break ground soon.

The new restaurant will be barbecue-centric, but won’t be a copy of Stiles Switch. “We haven’t chosen a name, but it won’t be Stiles Switch 2,” owner Shane Stiles told me, adding that, “We’re not interested in becoming a chain barbecue restaurant.” It also won’t be just barbecue. They’re partnering with Lenoir’s Todd Duplechan for development of their Southern-style menu. “We’ll stick with the core barbecue menu and chef it up a little,” said Stiles. 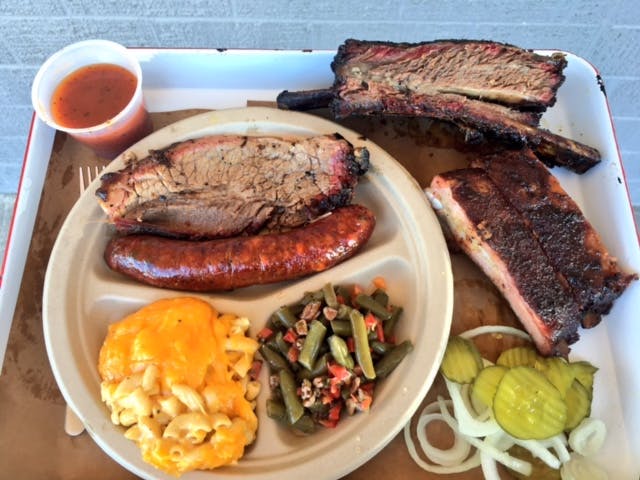 The pits will be run by the current staff that Stiles Switch has already built which includes Bill Dumas, Andy Stapp, and Alanmykal Jackson. In fact, so many cooks in the kitchen was one of the important reasons for expanding. Stiles said he needs to give some of his current staff room to grow, which is hard to do with just one location.

Lead pitmaster Lance Kirkpatrick will split time between the two locations, and he assured me that they’ll still be cooking with all wood. They plan to stick with the Klose smokers they’ve been using, but will need a few new ones for the 2000 square foot pit room.

Maybe most exciting is that the new space will allow Stiles Switch to make their own sausage and other cold-smoked items. A large cold room and smokehouse will be part of the project, so also look for house-cured ham, bacon, and maybe even smoked fish and venison on the menu. It also offers just the right conditions to start a pastrami rivalry with their new neighbor, Pieous. I know I’ll be there for a head-to-head tasting.