With a history formed by ranching and railroads, Abilene sounds like a city destined to have good brisket. It was founded in 1883 after cattle ranchers and land speculators convinced the railroad to swing north of former county seat Buffalo Gap, and a new city was born. After the railroad came through, cattle no longer needed to make the long trek up the Great Western Trail to Kansas. Still, good brisket is hard to find here. On a previous trip to Abilene, I found the best bite of barbecue down in Buffalo Gap when I tucked into a plate of pork ribs at Perini Ranch Steakhouse. That didn’t say much for the rest of the city’s established barbecue joints.

Last year, Matt Proctor decided to change that. Along with his wife Kelly they built a barbecue trailer and a new business. Matt had left his work as a petroleum wholesaler. He was done with gas, and that includes how he fuels his pit. It’s all oak and mesquite these days. After making a name for themselves with the trailer, the Proctor’s opened a brick and mortar location in April. The Stillwater sign now hangs high over Fourteenth St., and don’t be confused by the Oklahoma-sounding name. Proctor explains “We decided on Stillwater as a kind of tribute to my great grandfather who was a moonshiner during prohibition. He used a moonshine still to make moonshine. We use a steel pit to make barbecue.” 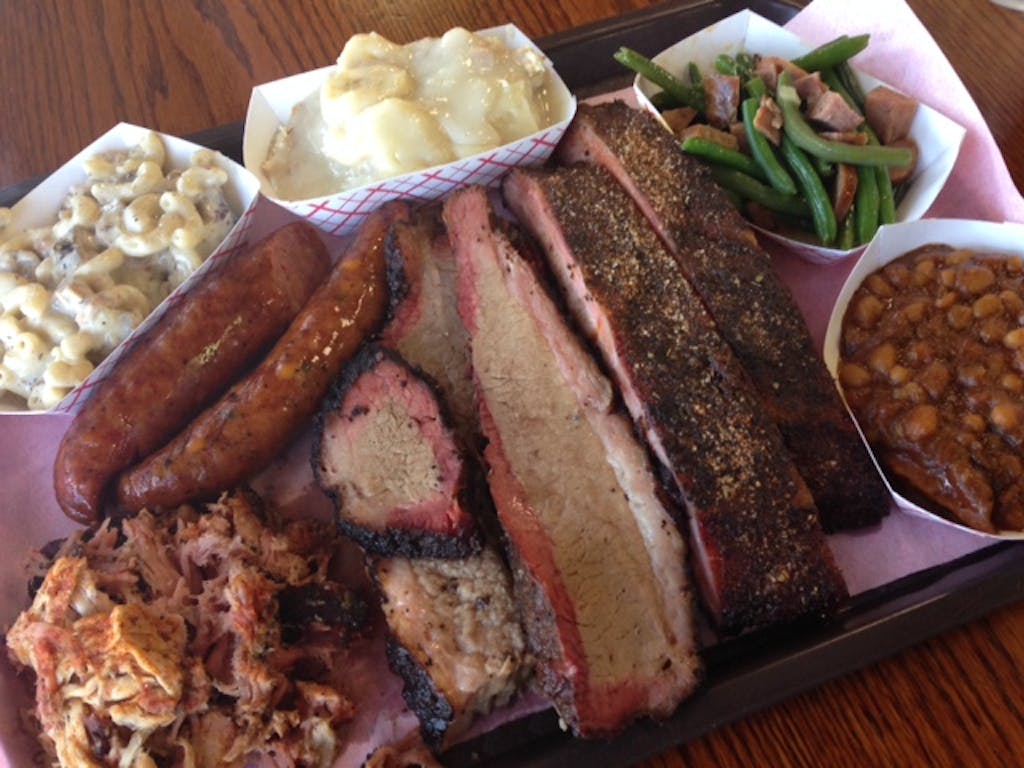 Orders are placed at the register in view of the bevy of sides. If you don’t get enough meat here, it’s your fault. Chopped brisket enriches an already thick and creamy mac & cheese. Those on a budget could make a meal out of the stuff. The sweet baked beans are also bolstered with brisket, and the only thing green on the menu, the pleasantly crunchy green beans, had flecks of sausage. They’re all good, and they also show that Stillwater has somewhere to stow its leftovers instead of giving you yesterday’s meat.

On the menu, you might find burnt ends, beef ribs, or smoked turkey as a special. I went with the basics. Big spare ribs could have been a bit more tender, but they were smoky and well seasoned. The flourish of a sugar-heavy rub applied just before serving was unnecessary. Crunching on the uncooked sugar was like getting to the bottom of a poorly mixed glass of sugary iced tea. The effect was more distracting on the otherwise exceptional pulled pork. The juicy meat had enough bark and smoke to shine on its own.

The sausage, from Hudson Meats in Austin, was well smoked with a nice snap on the casing and a great texture. It was a good compliment to the star of the show – the brisket. With all the great steakhouses in Abilene, the city isn’t short on wood cooked beef, but it’s usually steak over mesquite coals. Stillwater has the only great brisket that I’ve found on a menu in Abilene. The smoky bark was exemplary, and the fat nicely rendered. The only issue were the overly thick slices. They made the meat seem less tender than it really was. 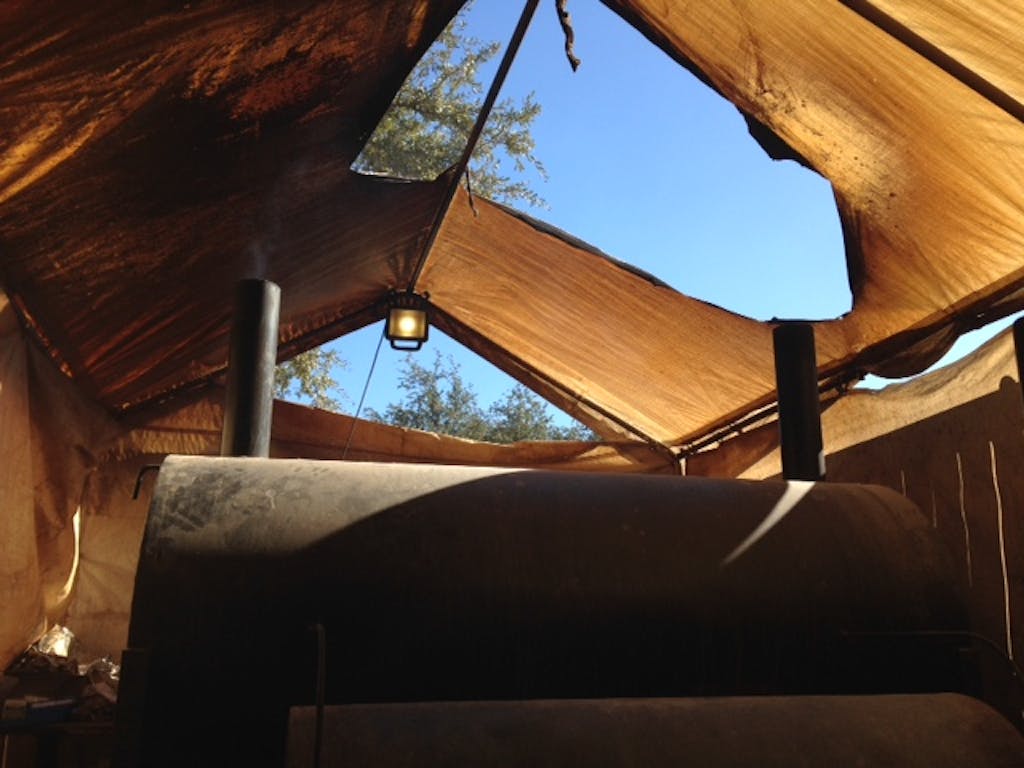 All that smoke comes from an offset smoker around the side of the building. We walked around diminishing piles of wood – his wood supplier is finding it hard to keep up –  to a partially protected smoker. A plastic tent had been heavily compromised by a recent pit fire. Proctor said the pit was built by a welder in Abilene, and after a visit to Pecan Lodge in Dallas, he realized they had the same design.

Also, much like Pecan Lodge, they have a great homemade banana pudding here at Stillwater. Proctor was standing by the table when I noted my surprise at the warm pudding. I’m used to cold banana pudding in Texas, and that is actually his intention. They make a fresh batch every day, and this one was just finished a bit late and hadn’t fully cooled. No matter the temperature, it was spectacular. 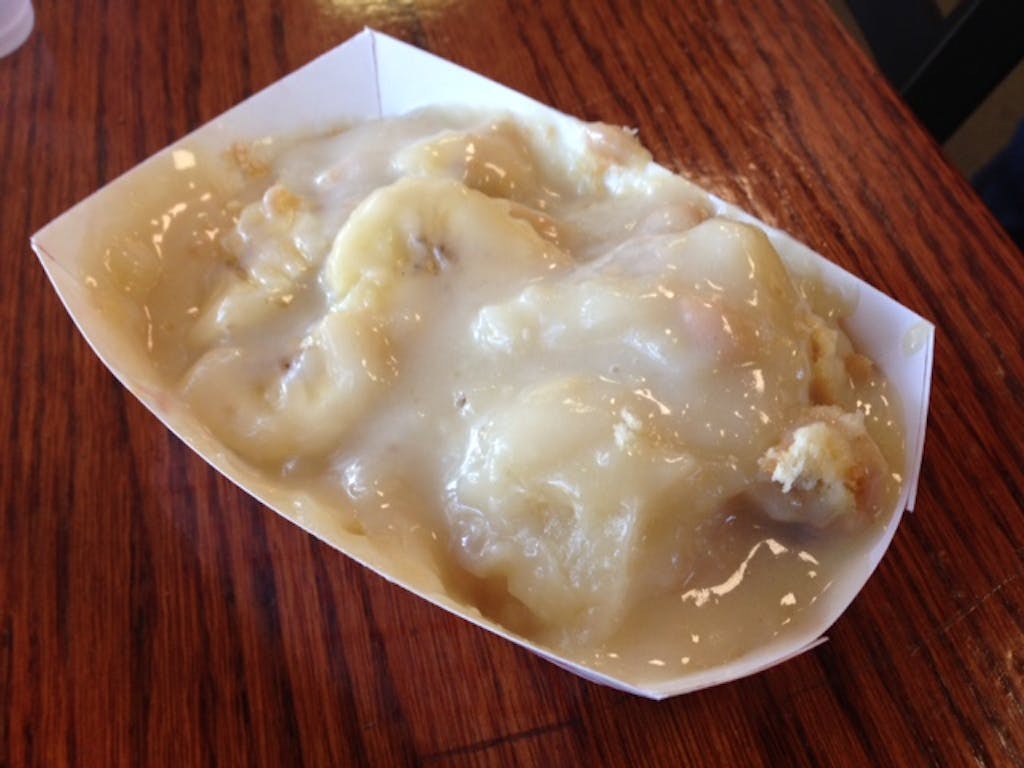 The Proctors are hard workers and it shows. Kelly had their first baby shortly after the grand opening, but was working the register when I visited. Matt gets little sleep. As a father of two, I can’t imagine having a needy newborn and a needy barbecue pit at the same time. Even with those challenges, they’re putting out great barbecue, and it’s nice to be the witness of hard work paying off.