In Luling, Wayne Baker grew up on the basics of barbecue. Brisket, ribs, and beef sausage came wrapped up in butcher paper at City Market, the favored barbecue joint of his youth. “I didn’t really know a barbecue plate existed,” he told me at his barbecue joint, Baker Boys BBQ in Gonzales. The Baker boys are a little less orthodox than City Market, but then Wayne and his father Phil, who opened the place together in 2015, brought in a lot of their competition barbecue knowledge to the pit room.

You won’t find a stack of wood or an offset smoker at Baker Boys. They cook with oak lump charcoal in an insulted cabinet smoker by Stump’s. Their menu is also quite a bit wider than the average barbecue joint in these parts. Turkey breast, half chickens, and smoked pork loin join the standards like brisket and ribs. The make a mean homemade beef and pork sausage as well, but it was an item I’d never seen before that caught my eye: stuffed chicken legs. 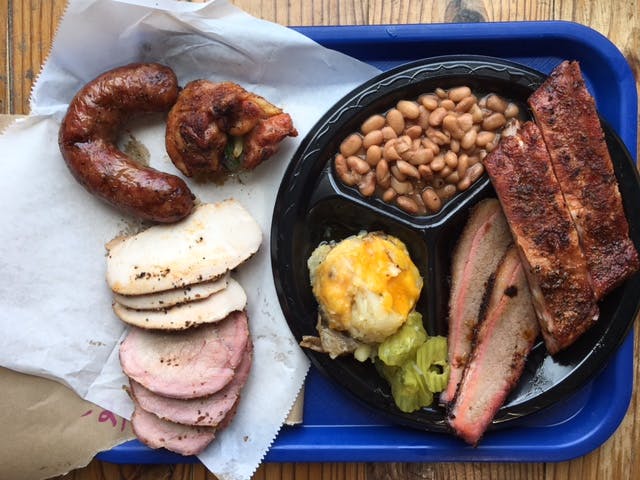 The key is finding large chicken legs. “I like them about 1/2 lb apiece,” Wayne Baker told me. He said his Phil is usually the one who preps them, but Wayne showed me the process anyway (he says Phil does them de-boning far more quickly).

The skin around the outside contracts as the meat cooks and pulled the ingredients together. They’re then finished over direct heat charcoal to get the skin crisp. It’s a unique item I was happy to stumble upon.  They’ve become a popular item, and the Baker boys smoke thirty or so a day on the weekends. The dark meat says juicy, and works far better than white meat. It’s one of the best new barbecue items I’ve tried, and I’ve only found it on this barbecue joint menu in Gonzales, Texas.