Tejas Chocolate & Barbecue in Tomball is known for its barbecue innovations—like mole barbecue sauce and chile relleno sausage—and, of course, for its bean-to-bar chocolate operation. But how about that chopped hog po’boy, the steakhouse and “no masa” sausages, and smoked prime rib on Friday nights? If those last few are new to you, then you aren’t alone—they’re experiments the restaurant has added since the coronavirus pandemic hit last month.

After the restaurant went takeout-only, business slowed and the staff had less interaction with customers. Co-owner Scott Moore harnessed his restless energy to come up with new items. Tejas began offering Friday-night prime-rib dinners three weeks ago as a way to diversify the menu, as well as provide some smoked happiness to start the weekend. The dinners have been popular, which means Moore is left with plenty of raw ribeye meat and fat once the whole prime ribs are trimmed. “There’s a lip on there,” he says, describing the largest portion of meat he has to remove to provide the shape he prefers. That lip of the prime rib goes into the sausage grinder, along with mushrooms, garlic, and red wine. “We thought about calling it lip sausage,” he jokes. They settled on steakhouse sausage.

I ordered a few links of it online (Tejas takes email shipping orders through [email protected]), which was mainly an excuse to get a half-dozen chocolate bars and some of the famous chile relleno sausage to piggyback in the same Styrofoam box. Moore also included his newest creation, which he has dubbed “no masa” sausage. “There are people that can’t eat pork, so they want the all-beef [chile relleno sausage], but they can’t have it in a hog casing,” Moore explains. He went searching for a different casing solution.

Moore didn’t like the texture of collagen casings, and the beef casings he tried were “like chewing through a rubber band.” He credits his Ruffino Meats sales rep, Greg Court, for suggesting corn husks. Moore immediately went to a local Mexican market and bought some husks. “I had chile relleno sausage in a corn husk about ninety minutes after he told me about that idea,” he said.

The husks create an expectation that a tamale might be found inside. That’s why Moore named them “no masa” sausages since it’s all sausage filling inside the husk. Just don’t pull a Gerald Ford and try to bite through the husks—these sausages require peeling. Moore admits the unwrapped “no masa” sausage doesn’t look quite as appetizing as the mahogany hue of the pork casing on the regular chile relleno sausage. The ones I ordered reheated well in the oven. The links retained their moisture, and a hint of corn flavor remains, or maybe it’s just the aroma that lingers after you open the husk. I missed the snap of the casings, but the flavor of the original is well-represented.

Another new addition to the Tejas menu is the hog chop po’boy sandwich. We reported not long ago that whole-hog barbecue, famous in the Carolinas and Tennessee, is creeping into Texas. The version at Tejas isn’t the entire animal, but the combination of cuts is supposed to mimic the texture and fat content of whole-hog barbecue. Ribs, pork belly, pork shoulder, and pork shanks are all smoked as separate cuts, then deboned and chopped together. “It’s the belly that makes the whole thing magical because of the creaminess of the fat,” Moore says.

Moore says experimenting is almost compulsive for him: “I cannot make it stop.” Then again, why should the menu stay the same when most of the operation has changed? The long lines stretching outside the door have been replaced with a curbside pickup lane in the street, cordoned off by orange traffic cones. The chocolate truffle display case inside is now empty after sales dropped from 1,500 per week to 200 in the first week of restrictions. Moore even had to kick a potential customer out of the place when he refused to maintain distance between himself and the staff.

Another change is that Tejas is shipping a lot more of their barbecue. Most of their smoked meat menu is available for order, including the “no masa” sausages, whole briskets, and racks of pork ribs. “We shipped some carrot soufflé up to Pennsylvania,” Moore says, referring to the popular side dish. The extra business helps, but they’re still struggling. Their new burger joint down the street is running with half the revenue, and business at the barbecue joint sits at 65 percent of the normal. “One third of your sales is product, one third labor, and one third overhead. If it goes down by 35 percent you’ve got some scrambling to do,” he said. At least in all the scrambling, they’ve found some inspiration. 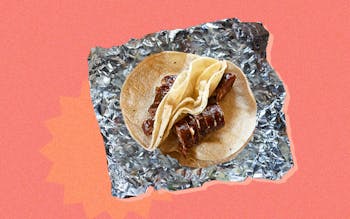 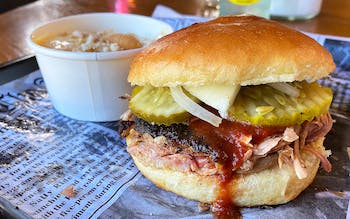 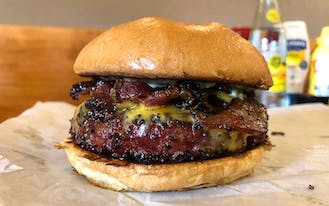