Larry Lavine has been an accomplished restaurateur in Dallas for decades, but he’s best known for founding the Chili’s chain in the seventies. He sold the business thirty years ago, even before baby back ribs ever made it to the menu, and now he’s in the brisket game. After plenty of R&D and a lengthy renovation of a building between Highway 75 and the DART line, Lavine’s newest restaurant, Ten 50 BBQ (named for the address) in Richardson opened its doors a little over two months ago. 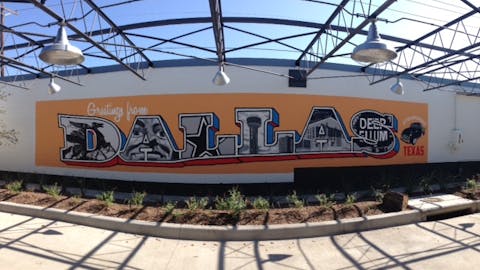 It was an ambitious start. Lavine had planned to cook using three different cookers for three separate barbecue cooking methods. They had to produce enough to feed a 10,000 square foot restaurant twice a day, then there were the immediate comparisons that Lavine seemed to bring upon himself. “Franklin’s in Austin is the gold standard and we think we’ve matched that” is how he told it to the Dallas Observer on his first day in business. When I asked him about it during my last visit he insisted he was misquoted. No matter, the brisket ain’t bad, but as you may have guessed it ain’t Franklin Barbecue either. 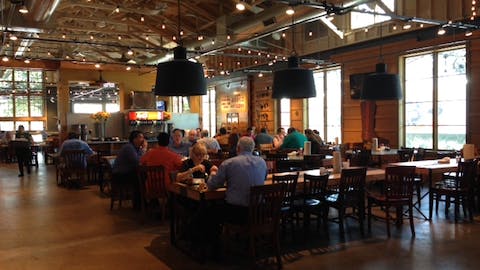 If you’ve been to Cooper’s Bar-B-Que or Hard Eight BBQ, then the ordering system will be familiar. Meats are selected from one of two outdoor pits. There are two lines, and both move briskly. The long lines suffered shortly after opening are no longer an issue. Once inside you can pick up sides, sauces, and desserts before paying and finding a table in the large dining area. If you’ve selected the crispy fries or hand-battered onion rings, they are brought out to the table once ready. I would highly recommend that your order include some of those onion rings. They may be the best thing on the menu, and that’s not a thinly veiled knock on the meat. These are great onion rings with some kick that is tempered with a generous amount of herbs in the batter. There’s also enough to serve three people in every order. 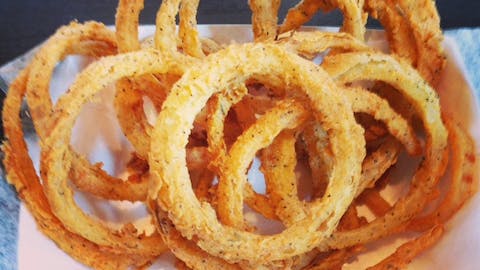 You have more control over the meats, although a half chicken is the only way they offer their smoked bird. It’s also the menu item that best displays the kitchen’s talents. The brined chicken remained juicy while the skin was crisp. There was just enough smoke to balance the salty, and ever so slightly sweet rub. The other poultry option doesn’t fare so well. Turkey breasts are smoked with the skin on, but when the skin comes off so does all the flavor. It might as well be roasted, and it was dry on the two visits that I tried it. 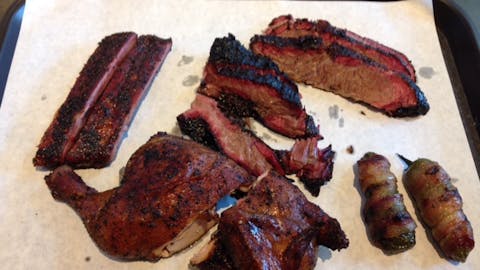 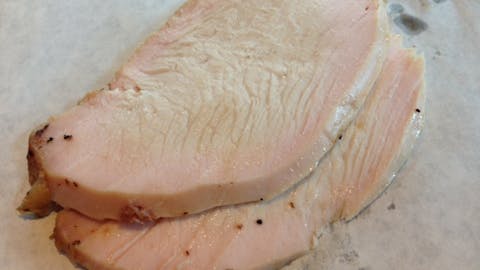 The opening day menu has been tweaked a bit. Ribeyes and salmon have been removed and sandwiches were added. The original idea was for the steaks and fish to be cooked over coals on a direct heat cooker. That cooker still exists, but is used solely for Torpedoes – bacon wrapped jalapeños filled with brisket (although chicken was listed on the menu). Another pit has also been abandoned. A huge offset smoker sitting next to the entrance was hot, but only because the firebox is now used simply to make the mesquite coals required for those Torpedoes. The smoker’s cooking chamber remains empty. It was intended to be the tool to get that Franklin Barbecue flavor into the briskets, but Lavine said it cooks terribly. Now the briskets, along with everything else, go into one of two Oyler rotisserie smokers. 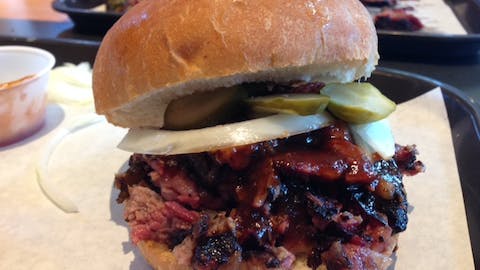 Brisket for the sandwiches was chopped fresh on the block and placed into a paper boat. A bit of DIY was required once you collected the bun, sauce, pickles, and onions. It eventually made a great sandwich on a good bun from Dallas’s Village Bakery, and the homemade pickles didn’t hurt either. Use the house sauce, since the other option is a product of thinking that you can just add lots of vinegar to anything and call it Carolina style.

The sliced brisket wasn’t quite as good, and showed some consistency issues. I visited twice in the past two weeks. Both times the brisket was better than the dry stuff they were serving in their first week. Oddly it was the flat that remained juicy and was well cooked on both visits. The fatty end of the brisket was overcooked mush on one visit, and undercooked on another. There was some good smokiness every time, but it was missing some pop and that lusciousness that should come from well marbled brisket. 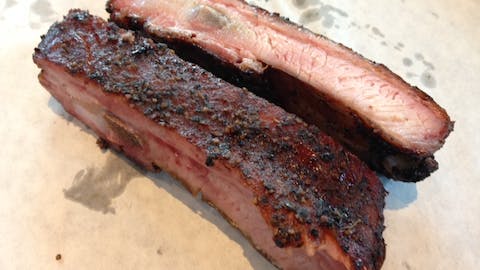 The St. Louis cut pork ribs exhibited better balance. A sweet rub had plenty of black pepper, and the smokiness of the bark played well with all of it. The texture was exemplary, but they shouldn’t be juicy only half the time. 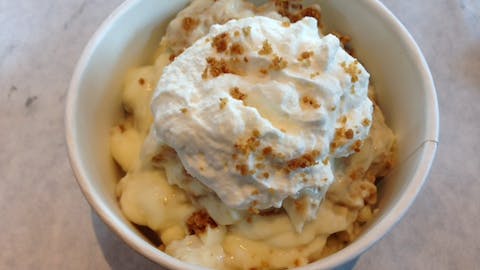 As for the sides, coleslaw is crunchy with a dose of cilantro. As for starches, I liked the chunky potato salad better than the lifeless mac & cheese. The sides are all homemade, but they won’t wow you like the desserts made by Larry’s wife, Ann. Her key lime pie and cheesecake are both classics, but that banana pudding is something special. Instead of vanilla wafers, it has bits of graham cracker crust mixed in as well as sprinkled over top. Touches like that let you know how much effort is being expended here to provide honest homemade food.

Lavine admittedly has an eye on expansion to other markets in Texas. Don’t expect Ten 50 BBQ to be a one-off. This place looks like a concept, but it has the potential to be a very good one. Now that they’ve chosen a single cooking method, they can get to work on that brisket. If they can nail that, Lavine will be gunning for Rudy’s soon enough. I just hope he never changes that banana pudding.