It was big news when the Austin American Statesman announced fourteen months ago that Black’s Barbecue was opening an Austin branch. It looked like the Black barbecue family from Lockhart was expanding. Running the place would be twins Michael and Mark Black, nephews of Kent Black who manages the legendary Lockhart location. Everyone seemed excited about this new branch in the barbecue family tree, then things got ugly.

A few weeks after the big announcement, Kent Black sent a cease and desist letter that forced a name change to Terry Black’s Barbecue (Terry is Kent’s brother and the father of Michael and Mark). Kent told a local news station, “We don’t want our customers confused and thinking that it’s going to have the same recipes or cooking techniques as we have here in Lockhart.” The brothers were upset, but quickly embraced the controversy, and chastised Kent Black for using rotisserie smokers. With a #nogassers hashtag, they promised from their twitter account to use only wood in their giant offset smokers.

A commenter on Eater Austin posting as MichaelBlack promised even more. “I look forward to having the best overall BBQ joint in Austin, the NEW BBQ CAPITAL OF TEXAS in my opinion,” a further dig at the Lockhart original. Kent Black maintained his position in an interview with TMBBQ, but stayed on the high road when speaking of his nephew Michael. “He’s a good kid and he’ll do well.”

By the time they finally got the doors open at Terry Black’s last June, most of the controversy had blown over. It opened to mixed reviews. Matthew Odam of the Statesman said it was struggling to find its footing in September. Based on my first visit around that time, I agreed. After a recent visit, Terry Black’s Barbecue seems to have found some solid ground.

It was 2:30 in the afternoon and the lunch rush was long gone when I stopped in. By this time of day most of the well-known names in Austin barbecue are sold out, but Terry Black’s carries on into the dinner hours every day of the week. That’s honorable, but how was the meat holding up? Quite well on all accounts. 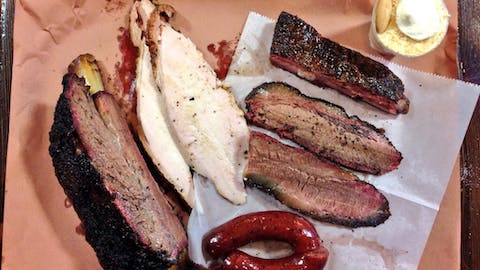 It’s a good sign when the lean brisket is still juicy in the middle of the afternoon. The juiciness was evident on the cutting block where my order was deconstructed from hulking chunk of jet black brisket. As promised, they cook with all wood here (to the ire of some neighbors) and it comes through in the finished product. So does a good dose of black pepper and salt, and more salt. Other than the slices of juicy, well-seasoned turkey breast, all of the meats suffered from too heavy a hand with the salt shaker. 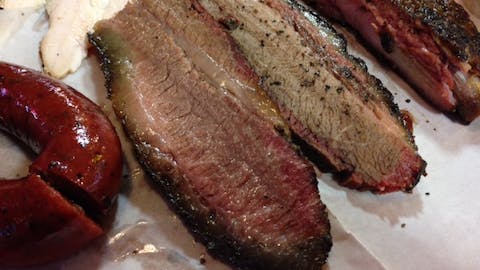 Beneath the salinity on the surface of the mighty beef rib, there were lusciously fatty bites of expertly smoked beef. The rib hadn’t gotten to the point of overcooked mush in the holding bin, but was amply tender and juicy. 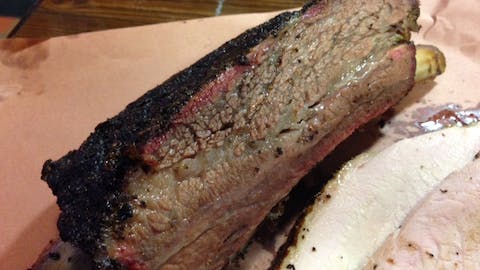 The pork ribs were neck and neck with the beef as far as proper doneness, but the heavy rub and glaze kept a good bark from forming. Some textural variation between the tender meat and the outer crust would have been nice. The jalapeño cheese sausage had that perfect texture with a snappy casing bursting with juice and plenty of bite form the jalapeños and black pepper. It’s a classic Central Texas ring sausage that should be included in every order here.

A great way to end a meal at Terry Black’s is with the banana pudding. There are plenty of banana chunks suspended in the airy pudding lightened with whipped cream (more likely Cool Whip) and it’s all topped with crumbled Nilla wafers. As I cleaned the bowl the salt residue disappeared from my palate. The over-seasoning is any easy issue to fix. What’s harder is serving good barbecue all day long, and Terry Black’s does it better than most.