No matter how much barbecue I’ve consumed (typically five times the recommended daily allowance), it always feels like there’s room left for something sweet.  A bowl of peach cobbler or a slice of buttermilk pie offer comfort, but their recipes don’t really vary much from one end of the state to the other. But banana pudding? No other Texas barbecue dessert is subject to as much innovation.

First, though, let’s talk about what unifies banana pudding in Texas. That’s temperature. If you venture over to North Carolina, it’ll come piping hot and covered in meringue, but in Texas it’s served straight from the fridge. Even an early recipe in the Dallas Morning News from 1899, long before the days of refrigeration, suggested serving it “perfectly cold.” I prefer the chilled version. In fact, I have some other strong feelings about banana pudding that I shared in my book, The Prophets of Smoked Meat:

At its best banana pudding is simplicity in a bowl. Sliced bananas, vanilla custard, and a topping of Nilla wafers is all that’s required, but as with Texas brisket this simple dish gets mangled in myriad ways. The most common problem I’ve encountered is the use of flavored instant pudding. I can almost forgive the use of instant vanilla pudding in cases where enough bananas are added to counterbalance it, but instant pudding with artificial banana flavor is a soulless, noxious abomination. It is counterfeit banana pudding and should be outlawed.

Admittedly, the list of my favorites across the state would be pretty thin if I kicked out all of them that use a vanilla pudding mix. It’s even hard to find a recipe online that doesn’t start by opening a box.

And so, after compiling the Best Banana Pudding list below and dwelling on what constitutes great pudding, I realized I had little choice but to develop a recipe. Scroll past the Top Ten and Honorable Mentions for a from-scratch recipe that’s easy enough for even the busiest pitmaster to follow. 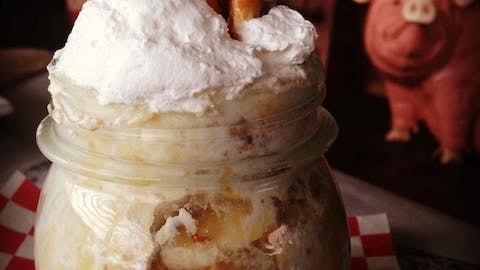 1. Virdinski’s Rub Shack in Amarillo – Not only is the pudding homemade, so are the vanilla wafers. It might seem dubious to mess with the perfection of Nilla wafers, but these are crispier and more buttery and have a flavor reminiscent of graham cracker crust. Some are crushed into the pudding for some nice textural variation, and the addition of freshly whipped cream tops it off in style. 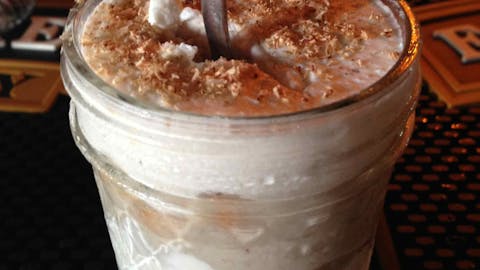 2. Freedmen’s Bar in Austin – This jarred version is constructed in visible layers. The gray color is a good sign that real bananas were used in the pudding (reminder: the fruit of a banana isn’t yellow), and these bananas get some special treatment – they’re smoked. There are also layers of whipped cream, and grated nutmeg provides the crown. 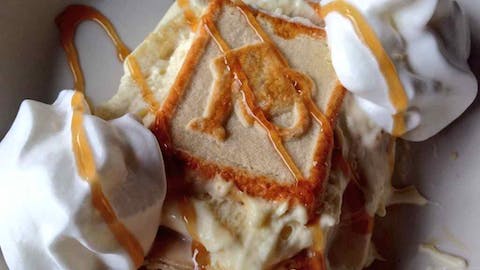 3. Billy’s Oak Acres in Fort Worth – Billy Woodrich trades the wafers for Pepperidge Farm chessmen butter cookies, a la Paula Deen. The pudding beneath is light and on the sweeter side, making the drizzle of caramel unnecessary, but then who says no to caramel…or to more whipped cream? 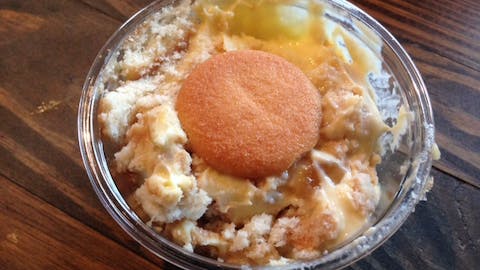 4. Pecan Lodge in Dallas – Diane Fourton has recreated her Aunt Polly’s classic recipe for restaurant sized servings. This one is heavy on banana flavor, and uses a classic custard for the base. Some days that custard can be on the thick side, but it’s usually a spot-on, smooth and satisfying pudding. 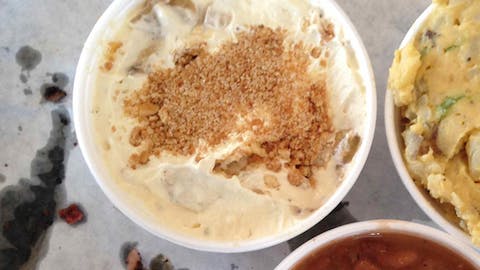 5. Hwy 29 BBQ in Bertram – Molly Thibodeaux, wife of co-owner Corey, brought this recipe onto the menu. It starts with a simple vanilla pudding base with bits of banana chunks. Instead of using whole Nilla wafers for the topping, these are crushed and mixed with cinnamon and sugar. 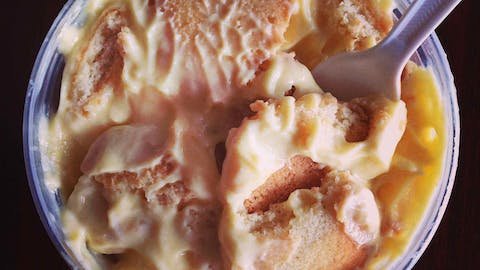 6. Hardeman’s BBQ in Dallas – You can only get this one on Fridays at the Kiest and Hampton location of Hardeman’s. Owner Gloria Hardeman insists that it be served on the day it was made, but she’s not willing to give up too much about the recipe. I guessed the added tanginess came from sour cream, but Gloria’s stone face didn’t offer any clues. You’ll just have to try it for yourself. 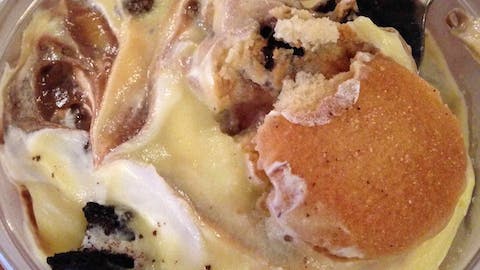 7. Stiles Switch BBQ & Brew in Austin – Some desserts have an identity complex, and this is one of them. It’s half chocolate and Oreo pudding, and half banana pudding. Mix it up to get a bite of both in one spoonful and you won’t care if it’s traditional or not. 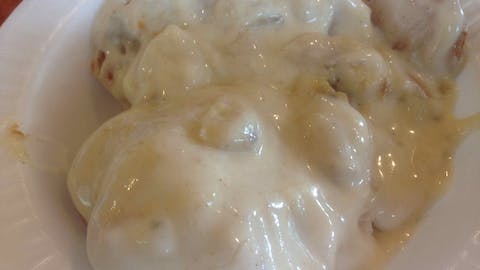 8. Killen’s Barbecue in Pearland – It’s the ugly duckling of Killen’s dessert options where the bread pudding and pecan pie are the handsome siblings. The custard base is on the thinner side, but they don’t skimp on the bananas. It actually reaches its highest potential when mixed with the bread pudding. 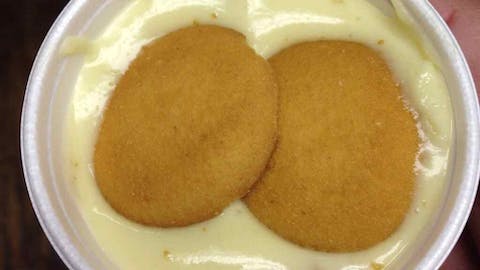 9 Snow’s BBQ in Lexington – If the bold flavor of bananas is what you crave, then this is the pudding for you. Crushed bananas are added to a thin base that includes sweetened condensed milk. The flavor resembles melted ice cream, and the smooth texture is just a few notches thicker. 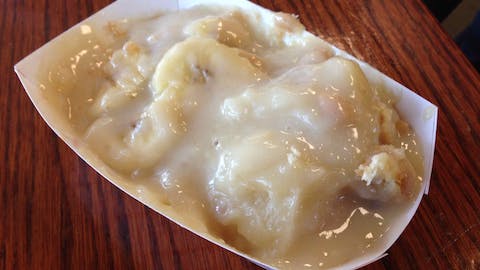 10. Stillwater Barbeque in Abilene – If there’s any doubt this one is homemade, the pudding was still warm when I got it at 11:00am. It was so fresh it hadn’t yet had time to cool, but every warm spoonful was larruping good. 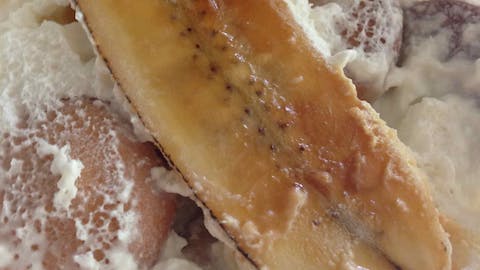 3 Stacks Smoke & Tap House in Frisco – The addition of a brûleéd banana on top is a nice touch. 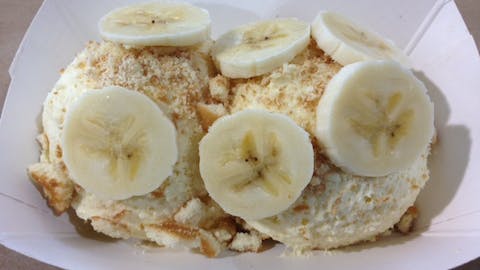 BBQ on The Brazos in Cresson – It’s an obvious mix of instant pudding and Cool Whip, but it’s still tasty. 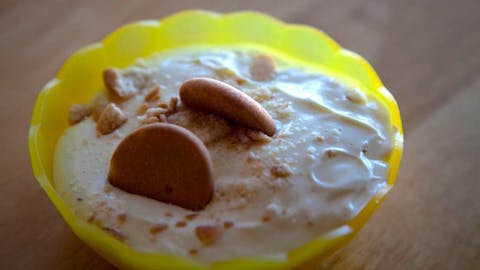 Hiway 77 Cafe in Rosebud – A classic pudding in a classic roadside cafe. 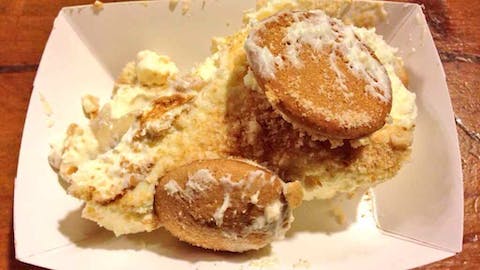 Hutchins BBQ in McKinney and Frisco – It’s free and better than most that you have to pay for. 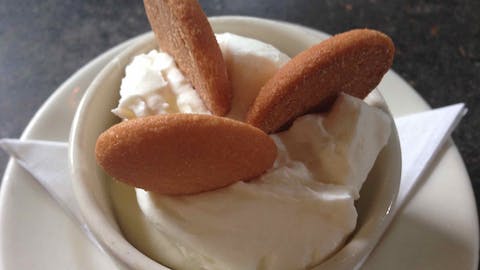 Lambert’s in Austin – Being fortified with bourbon helps, but instead of velvety, the custard was grainy. 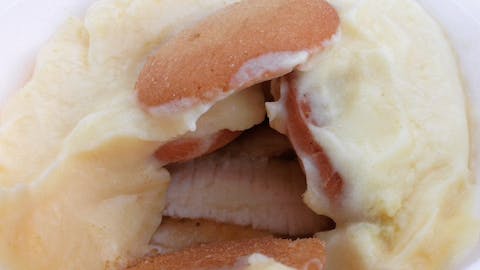 Lost Pines Bar-B-Que in Giddings – They don’t assemble this one until you order it, so there’s a hidden banana protected by a teepee of still-crunchy Nilla wafers.

Pizzitola’s in Houston – Whipped cream is folded into this basic, yet satisfying version. 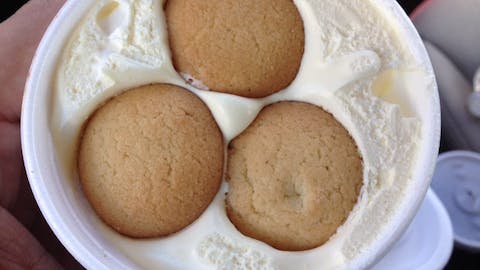 Ronnie’s BBQ in Johnson City – Cool Whip adds enough fluffiness so it feels like you’ve barely had a spoonful before it’s all gone. 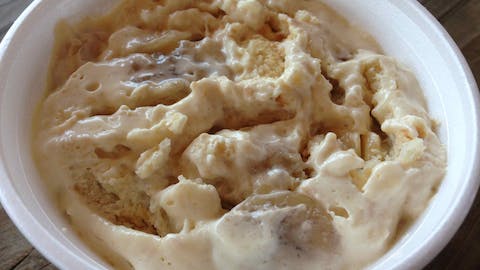 Southside BBQ in Cherokee – It won’t win any beauty contests, but it’s got all the right ingredients. 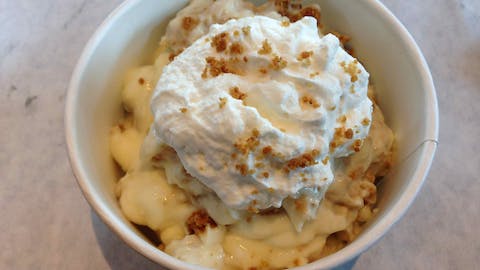 Ten 50 BBQ in Richardson – Wafers are traded out for bits of graham cracker crust for an unexpected flavor. 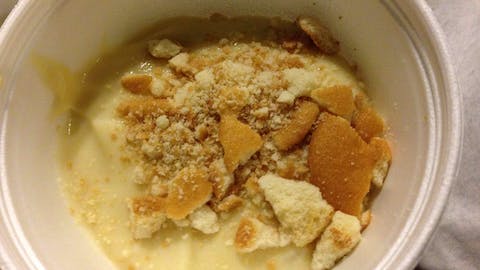 A note about process. After sampling more than a hundred banana puddings, it was time to come up with my own definitive recipe for the perfect post-barbecue banana dessert. I began by studying my existing favorites, immediately discarding any that mentioned corn starch. That left me with flour for a thickening agent. I toyed with the amount until I reached the perfect consistency. I wanted my pudding to have the authentic banana flavor (hence the mashed bananas treated with lemon/lime juice to prevent oxidation) and a little acidic zing (hello, sour cream). Nevertheless, a good pudding will result if you skip these two steps. Homemade vanilla wafers are great, but making a great pudding shouldn’t be so challenging. Nilla wafers work just fine, and the smaller ones make for an easier spoonful. Skip any and all frozen whipped topping. Nine batches later, I arrived at:

Boil water in a medium saucepan to be used as a double boiler. Whisk together dry ingredients in a metal bowl that fits comfortably overtop sauce pan.

Quarter 2 bananas and microwave on high for 45-60 seconds, until very soft. Mash together with lemon/lime juice. Beat together mixture of mashed bananas, half-and-half, and egg yolks. (For a unique flavor, smoke the bananas rather than microwaving them, then add the smoked, mashed bananas into the mix).

Place bowl with dry ingredients on top of sauce pan once water boils. Add half-and-half mixture and whisk continuously for about 7-10 minutes until it thickens into something resembling cake batter.

Take off heat. Add vanilla and sour cream, and stir to combine. Let mixture cool to room temperature, approximately 1 hour (if you prefer mushy wafers in the finished product, skip the cooling step here and just build the pudding).

Slice 4 remaining bananas. Layer 1/3 of the Nilla wafers on the bottom of a large bowl. Layer 1/2 of the bananas over wafers. Pour half of pudding mixture over wafers and bananas. Add another layer with 1/3 of wafers and the rest of the sliced bananas. Add remaining pudding and top with layer of remaining Nilla wafers. Cover and chill in refrigerator for several hours (or overnight) until completely cool before serving.