It was an hour after the gunshot and parts of the hog—which was being rapidly dismantled—were being passed and carried in every direction. Hams hit the smoker; shoulders were tossed in pots of boiling water; fatback was diced; stomach and intestines were getting a good rinse before they became casings for sausage and boudin, all as someone else mulled over what to do with the tail. Because nothing is wasted at a Cajun boucherie.

The day before this scene unfolded, I had arrived in Grand Coteau, Louisiana, just north of Lafayette, to attend the boucherie, a weekend-long event where people would slaughter a hog and then, using all of the parts from the animal, serve up a giant feast. It was dark as I drove up to the long, winding gravel road to this open field just in time to see the last few songs from the band (whiskey seemed to be as important an instrument as the guitar and drums as the prolonged jam session played out from the plywood stage). A lamb, and thirty chickens had been served as dinner the day before I arrived, and all that remained was the skin of the lamb’s head drying in the breeze. Although it was Sunday night, most of the crowd remained for the main event to come the next morning: the pig slaughter. The other animals were merely part of the pre-party. 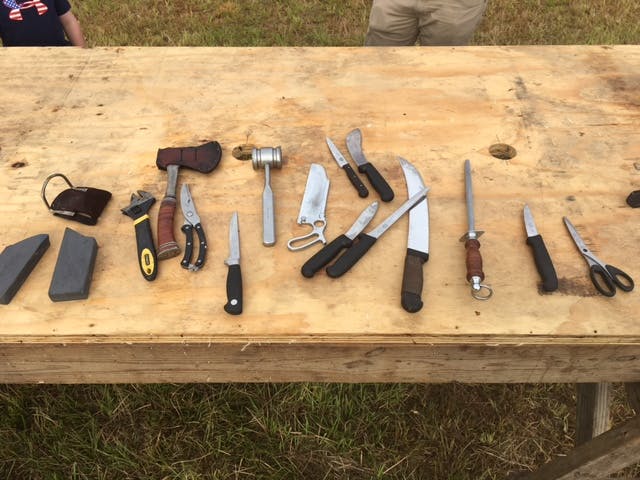 Monday morning, revelers emerged from their tents at daybreak to the sounds of propane burners whooshing into action and knives being sharpened. Folks gathered around a wooden table full of lethal instruments. On the other side of the table, Toby Rodriguez, head butcher and master of ceremonies for the boucherie, loaded his pistol. As Toby walked toward a slatted trailer on the edge of the field, the crowd followed. New Orleans chef Alon Shaya said a few words of thanks as Toby entered the trailer. With the propane burners now silenced and the anxious spectators quieted, you could hear his calming words to the 275-pound hog. He needed just one cartridge, a gunshot that signaled the start of a race against time and spoilage.

A boucherie (which translates to butchery) is a Cajun tradition borne of the time before refrigeration when killing a hog meant you needed a crowd to feed it to. It’s an event unique to South Louisiana. While hog killings have happened wherever hogs are raised, the end result is a contrast. A community in the Carolinas or Texas might have barbecued a hog for celebration. But a boucherie is different. It doesn’t have to coincide with a holiday or occasion; it is the occasion. The purpose of hog killing time in the long ago winters across the U.S. was all about preservation of meat for the cold months ahead. During a boucherie, the point is to eat the whole damn pig that day.

Sure, there’s barbecue, but the sheer variety of foodstuffs created from this single hog was mind boggling. As Toby handed pieces and parts over to various group leaders (each individual dish was executed by a different group of attendees), I followed them to their stations. Hams and ribs went in a smoker after getting a heavy coating of rub. There was boudin, backbone stew, frassieurs (an organ meat stew), hog’s head cheese, smoked sausage, and even the stomach was filled with sausage for a dish called ponce (or paunce). Fresh pig’s blood sat ready to be added to boudin noir. When in Grand Cateau, you dip your finger in and taste it. Salty.

I wanted to soak it all in, but it quickly became impossible to keep up. I was reminded of the clip that first piqued my interest in boucherie. Anthony Bourdain visited South Louisiana for his old show No Reservations and attended a boucherie with the same Toby that had butchered the hog this morning. In the episode, Bourdain could hardly contain his excitement as his eyes darted from station to station. “Every which way I turn, people are making delicious stuff,” he said, and that’s exactly how I felt. After circumnavigating the boucherie grounds a dozen or so times, I felt overwhelmed, and it became clear that I’d need to focus.

Chanel Gaudé and Bart Bell, both chefs from New Orleans, alternated handling a large wooden spoon being used to stir chunks of back fat in hot lard contained in a huge black pot. It would be a while until they were crispy enough to be called cracklins. I’ve enjoyed cracklins plenty, but I had never seen them made. I assumed you just dumped some pig fat and skin into hot oil, fried ’em up, and called it a day. But not so fast. The chunks first have to render down in a large pot for about an hour. The constant stirring keeps them from sticking on the bottom. Once they’ve crisped up and released a good bit of their fat, they are removed from the pot to cool. Once the first batch is complete, the propane burner is turned up to get the remaining lard to 400 degrees, and the cooled cracklins are re-immersed until they puff up into tender, crunchy, fatty nuggets. They’re seasoned heavily upon removal and are best eaten immediately (go here for a step-by-step look at the process).

This was just one of the many dishes served, an impressive production overseen by Runaway Dish, a food collective co-founded by my friends Katie and Denny Culbert, in Lafayette. This was their second annual boucherie (here’s a good peek at last year), and they’re already planning next year’s celebration. Toby Rodriguez and his Lâche Pas group have been integral to these events, and they aim to use gatherings like this one to preserve the Cajun food culture that isn’t well-represented in the state’s most populous and popular city, New Orleans.

Given the attendance this year (maybe as many as 400), I’d say they’ve got a hit. Many of the attendees were from the University of Gastronomic Sciences in Italy, a program that sends its students all over the world on intensive three-week visits to study food cultures. Over breakfast I talked with Laura from Switzerland and Sebastian from Colombia. They were both giddy about the day, and said many other fellow students in other parts of the world were jealous of their impending boucherie experience. Of all the trips the students were offered, Louisiana was the most coveted.

The Lâche Pas motto is “We are an undissolved morsel in a melting pot of watered-down culture.” You could say they are advocates of authenticity. And as passé as that particular word has become, being among these talented chefs, cooks, and curious attendees working together and not afraid of getting their hands bloody felt authentic. It’s the same feeling I got when attending the storied community barbecues of Texas like St. Louis Day in Castroville or Father’s Day in Millheim. But there was something slightly different about this one. Those Texas barbecues could make a cue from our neighbor and allow any and all interested parties to participate. This boucherie was full of life and hope—and youngsters. They’ll be here to carry it on, and because they’re encouraged to be active participants, they’ll be ready when the propane torch is passed.