Even if you know where it is, this unassuming storefront in a beige brick strip mall is easy to miss. I almost drove by it even as I stared at the blue dot on my iPhone signaling its location. I’d had eaten some samples from The Brisket House at the Houston Barbecue Festival a few months back. What I ate there was enough to get me over to their permanent location just outside the western edge of the loop in Houston. 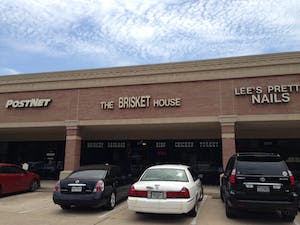 Owner Wayne Kammerl started his restaurant career at Tom’s BBQ in College Station.  A familiar place to Aggies who dined on the “Aggie Special” and chopped beef sandwiches which Wayne remembered only as being cheap, but not especially good. Tom’s was good enough to make Texas Monthly’s Top 50 BBQ joint list in 1997, but closed in 2001. Wayne’s food service path wandered considerably from College Station. It started with multiple locations in the Hard Rock Café chain, then on to a Sbarro franchise before he ended up at Ra Sushi in Houston. When he’d had enough of raw fish he tried his hand at barbecue again. That was three years ago when The Brisket House opened in this strip mall.

Back when the joint opened, Wayne did much of the cooking. These days those duties fall on Jorge Castaneda who was slicing the meat when I walked in around noon on a Saturday. The cutting table was in full view as I placed my order at the register. Jorge unfurled a fresh brisket from its plastic wrap veil and it landed with a thud on the cutting table. It was a jet-black behemoth of barely trimmed beauty. I motioned to the back end of the brisket and he sliced of a chunk that was mostly crust as I nodded in approval. Two more thick slices from the fatty end were placed in the tray before a slab of St. Louis ribs was brought out of the warmer. I could see the bark on the slab had barely formed, but the knife eased through the meat. I noticed a sign proudly displayed that noted their sausage supplier was Ruffino Meats in Bryan, Texas. The jalapeño sausage is made to Wayne’s special blend so that became my third meat in the combo plate.

Out in the car I tucked into a thick slice of brisket. Eminently moist and pull apart tender, this was a well smoked brisket. The saltiness in the rub was a bit much, but the smokiness was bold and the black pepper provided a pleasant heat. I didn’t so much bite as just let the burnt end melt on my tongue. So many “burnt ends” on barbecue menus use the entire point which is cut into chunks, then seasoned and re-smoked. This may turn into well seasoned chunks of beef, but it’s nice to be reminded of what a real burnt end is. It isn’t labeled at The Brisket House, nor does it get a designated spot on the menu. It’s just the simple end cut of brisket with a maximum amount of crusty, smoky surface area coursed with melting fat. Ask for it. 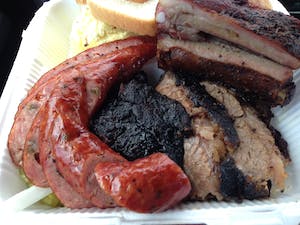 If only the pork ribs could have matched that level of flavor. The meat on each bone had a good pink color beneath a meager brown. Black pepper dotted the surface, but this couldn’t be called a bark. The pork came from the bone nicely without much of a tug and it was plenty juicy. Even the smokiness was there. Maybe the bark was stifled during the smoking process or maybe it was compromised in a sheath of plastic wrap, but considering the quality of the bark on the brisket I know the staff is capable of better.

A cough snuck up on me after a bite of the jalapeño sausage. There was some real chilé heat here that was easily quenched with a few more bites of sausage. The well-seasoned filling was wrapped in a snappy casing. The slices were on the bias making it a good scoop for the above average pinto beans and the eggy potato salad with a mustard base that barely held the potato chunks together. This was a solid meal even without the other meats.

When I stepped back inside to ask about their smoker I noticed the Southern Pride in plain view tucked back by the entry door. I had missed it in my rush to scarf down some lunch. A few hours later, the owner Wayne came by the bookstore where I was doing a signing. He’d seen my meaty photos from his joint on Twitter along with the announcement of the signing. We talked about his food background and the hassle of a second location. The Brisket House recently opened another location in Houston. Wayne admitted this turned his role into less of a cook and more of a manager shuttling back and forth between locations to keep it all running smoothly. Of his smoking process he says he starts the briskets in the evening at a higher temperature, but then lowers the thermostat to 190 degrees overnight to hold off the gas form kicking on as long as possible. When they get back in the kitchen in the morning they add wood to the fire and crank up the heat to finish them off. The briskets are then removed and wrapped so the ribs can go on and be done by opening time.

With a somewhat hidden strip mall location, a sparse interior and a gas-fired smoker, The Brisket House can give off a questionable first impression. If you can get beyond that you’ll be rewarded with some very good barbecue from a team whose highest priority is providing quality food instead of manufactured atmosphere.