Cooking barbecue like the masters is something plenty of us aspire to do. Thousands of videos and cookbooks have been published on the matter, but the best way to know the quality you’re aiming for is to experience it firsthand. Take a bite of a beef rib in Taylor or snap into a sausage in Luling or savor some sliced brisket in Austin. Continued and constant examination using the sense of taste is often the first step in cracking the code to barbecue perfection.

Now, imagine replicating those flavors by just looking at all that barbecue. It might even be right in front of you, but the most you can take in is the smell. That’s the challenge for barbecue cooks in the emerging realm of Kosher barbecue.

“The issue we have is that I don’t know what I’m up against,” is how Izzy Eidelman described it to me at his new Brooklyn restaurant, Izzy’s Smokehouse. “I don’t know what non-Kosher barbecue tastes like. I have to go based on what I’m seeing.”

Eidelman keeps a Kosher diet, and so trying non-Kosher barbecue—even in the name of research—is out of the question. And if he can’t taste the best, how did he even become interested in barbecue in the first place? Well, he was inspired by a fellow Kosher pitmaster, Ari White.

White is the owner of Gemstone Catering and the Wandering Que barbecue truck in New York. He’s also a native Texan. He was born and raised in El Paso where he dated a girl who worked at the Rib Hut. “Wednesday night was $1 ribs, but Taco Cabana was the place to hang out at night.” He left for a finance degree at Yeshiva University in New York, and stuck around. That world left him unfulfilled, so he started a deli, Ari’s Kosher Deli. “My wife and I opened it with all of our wedding money,” he said. They ran it for three and a half years and started a catering company at the same time. The catering company—especially the barbecue—became the focus.

Eidelman told me he was first introduced to barbecue at a pop-up event held by White. Eidelman tried the pulled beef sandwich, and it was a culinary epiphany. “I was like holy s—, that’s amazing.” He eventually started working with White as an unpaid intern over a summer learning the trade. “He’s my inspiration,” Eidelman said about White. “This guy is the pioneer of Kosher barbecue.”

It took Eidelman a while to get the hang of this new brisket cooking method. The first time he tried smoking his own, he used a gas grill. “It was the most disgusting thing I’ve tasted in my life,” he said. He actually wasn’t much of a cook at all. “Four or five years ago, I’d never cooked eggs in my life,” he confessed. I asked if his barbecue skills have helped him with the rest of cooking skills. “No,” he said, before adding, “well, I guess I can cook a prime rib.”

During a recent visit to Izzy’s, Eidelman peppered me with questions, as did his uncle and business partner, Jacob Baltz, and a few friends. “How does it compare to Franklin?” one asked. Another wanted to know if the beef rib was as good as Hometown Bar-B-Que’s in the nearby Red Hook neighborhood. I took the interrogation in stride. They couldn’t know for themselves, so they sought an honest outside opinion.

It’s not as good as either, but I don’t think that was a surprise to anyone. Billy Durney’s beef ribs at Hometown are masterful, and Franklin’s brisket isn’t going to be matched at a joint opened less than a year ago by a barbecue newcomer. But the barbecue at Izzy’s was very good, and a heck of a lot better than some recent efforts in New York. There’s a palpable passion in their outlook on barbecue, and Eidelman has gone to great lengths to use a wood-fired smoker from J&R Manufacturing. It’s a joint I wouldn’t hesitate to recommend.

The beef rib was tender, just salty enough, with a pleasant smokiness from a literal mixed bag of hardwoods (Eidelman orders cheaper, unsorted bags containing hickory, oak, cherry, beech, and ash). It was a beef rib I’d be happy to order again, and at $32-per-pound, it better be good. The brisket is even higher, maybe the most expensive in the country at $40-per-pound (Hometown’s is $28-per-pound). The brisket was impressive, but I’d give the beef rib an edge. “Tell me what I’m missing by not going to Franklin,” Eidelman finally pleaded after I’d eaten a second slice of brisket. I told him that would be cruel, but assured him that his barbecue was far above average. His customers seem to agree as well since he cooks as many beef ribs as possible, and still sells out every day.

The high prices aren’t entirely within Izzy’s control. Of course the rent in Crown Heights is expensive, and the Kosher beef they use is astronomical. Just a couple Kosher beef companies supply the New York market, so they control the pricing and the supply. Brisket is between $7- and $8-per-pound raw. Beef ribs, even at $9-per-pound raw, are hard to get. “The top supermarkets have first dibs on everything,” Izzy explained. He orders 20 cases (100 racks) of beef ribs every day. “I get five cases if I’m lucky. On a normal day I get two cases,” or ten racks of ribs. His customer base is 95 percent Jewish, and they can’t get enough, sometimes ordering a rack of ribs to-go in order to have something to eat over the Sabbath when cooking is forbidden for the Jewish community.

Many are probably unfamiliar with the rules of Kosher cooking. Going way back to the Old Testament, Leviticus provides some of the earliest rules for Kosher eating. In chapter 11, verse 26, Yaweh told Moses, “Every Animal which parts the hoof, and is not cloven-footed, nor chews the cud, is unclean to you. Everyone who touches them shall be unclean.” That eliminates pork (and many other animals) from the diet, hence the focus on beef ribs instead of pork, but keeping Kosher brings with it a whole set of challenges. Kosher meat is a little different than standard fresh beef. After it’s slaughtered, “you have to drain the blood and go through the salting process.” Eidelman described it like a salt brine that must be accounted for when seasoning. It’s why he uses a 12:3:1 pepper to paprika to salt ratio rub; the brine makes the meat already salty.

Using Kosher meat alone isn’t enough. A Rabbi must bless the restaurant, the smoker, and the tools used to prepare and cut the meat. No dairy can be served on the premises, and Eidelman has to close on Saturday, the biggest potential day of business.

In my old job, my bosses would test my patience with the adage “It’s not a problem; it’s an opportunity.” I always nodded, but rarely took it to heart. At Izzy’s, it might as well be a mantra. They don’t view the Kosher diet as a limiting factor. It actually helps to spur on innovations like smoked fried chicken, veal bacon, pulled beef empanadas, and something they call lamb-cetta which is lamb belly that’s rolled and cured like pancetta. They even make a great dairy-free mac & cheese, and even some excellent dairy-free “cream” pies. 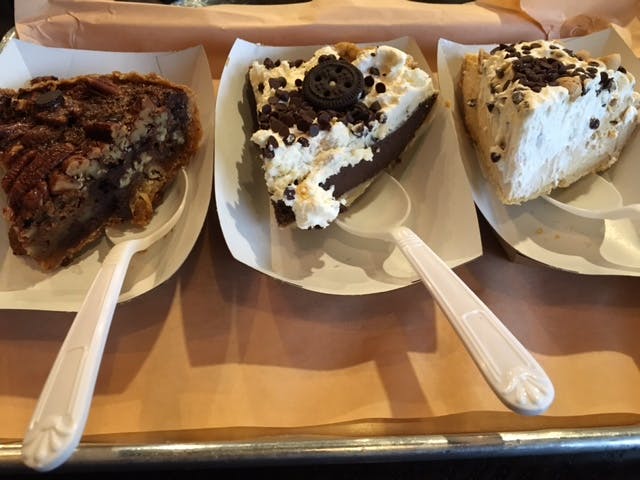 How did the barbecue at Izzy’s get so popular so fast? There isn’t much competition out there for Kosher barbecue. Uncle Milt’s in Chicago opened a few years back, and JoeBob’s Kosher barbecue sells is from a trailer sporadically in Austin, but it’s mostly an untapped market. After all, barbecue fans are happy to pay Eidelman for the most expensive brisket in the country. But is it worth it? If it’s the only way you can eat real barbecue, it’s hard to argue against it.