Cooper’s Old Time Pit Bar-B-Que is well known for cooking large pieces of meat over mesquite coals. You can place your order directly at the pit before carrying it inside to have it weighed. While you wait, there are bags of jerky hanging there just waiting for an impulse buy. I bit. Unlike everything else at Cooper’s, it is dried and smoked over hickory wood. I ate too much meat at lunch to add jerky into the meal (that Big Chop is a might filling), but I couldn’t wait to get home and crack a beer that required a salty snack. 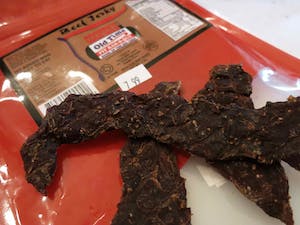 The point of beef jerky is to create a beef product that can last a long while without refrigeration. The main enemy of beef preservation is moisture. Preservation methods like air and oven drying, or salting are meant to eliminate moisture, so jerky should be dry. I know this might sound obvious, but I’ve had plenty of jerkies that are too moist. More often than not they will have a label that requires refrigeration of use after just a few days. That doesn’t cut it out on the cattle trail or an extended camping trip. This one would.

Cooper’s is a thicker cut jerky, but there’s still no jaw fatigue after a few pieces. There’s a pleasant chew without the odd juiciness of some jerkies. Along with the lack of moisture, the Cooper’s jerky is cured with sodium nitrite. This acts as a further preservative and also provides additional flavor. Large bits of black pepper also provide much of the flavor, and there’s just enough saltiness to complement it rather than overpower. This is how jerky is meant to taste.

Cooper’s Beef Jerky topples Pig of the Month Jerky, and takes over the top of the Jerky Heap.