If you think barbecue sauce on smoked brisket is an abomination, then you might want to sit down. At the Pit BBQ in San Angelo, they cover sliced brisket with creamy peanut butter and grape jelly in a sandwich they call the Jail Break, and I loved every bite. 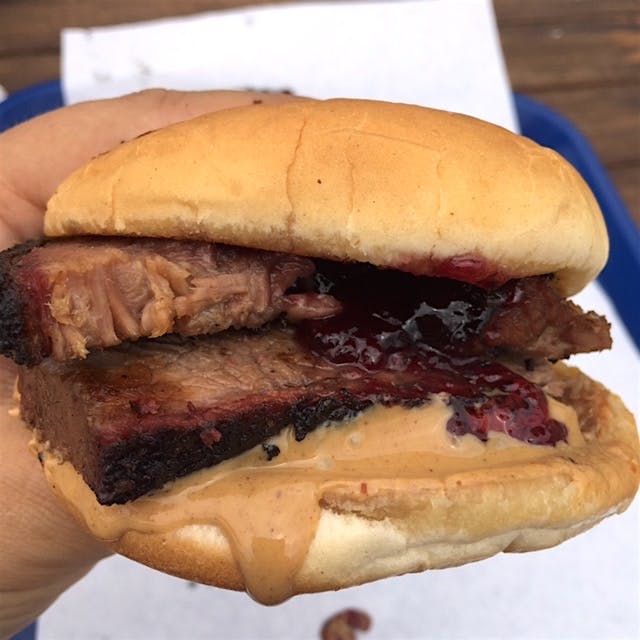 Pitmaster and co-owner D.J. Ridenour got the idea from Willie’s Joint in Buda. He worked several night shifts on the smoker before ever seeing a menu, then gasped when he learned what they were doing with the brisket he had spent hours cooking. He thought the peanut butter and jelly on their Elvis Presley sandwich was an abomination, but then he tried it. “It’s crazy enough to work,” he told me as we sat with the Pit’s co-owner, Jesse Sanchez, at a picnic table outside their year-old barbecue trailer on the southeast side of San Angelo. Mid-sandwich and wishing for a glass of cold milk, I was surprised to find myself nodding in agreement. The warm peanut butter coats the meat better than a thick barbecue sauce, and the jelly, though achingly sweet, punches back against the heavy crust of black pepper. I wouldn’t want one every day, but I’d pay money for it again.

Ridenour honed his barbecue craft in Austin working prolonged stints at John Mueller Meat Co. and Smokey Denmark’s before moving to San Angelo. You can get the stuffed poblanos he made at Smokey Denmark’s at his new place on Wednesdays. Tacos are reserved for Thursdays, their busiest day, but the massive beef ribs are on the daily menu at $17 per pound. That’s a deal compared to most Austin prices, and if you want John Mueller-style beef ribs, it’s currently your only option. When I asked Ridenour if he had any comment about his former employer, whose business was recently seized for tax reasons, he only offered that “John is John. Until you know John, you’ll never understand it and you couldn’t explain it.” 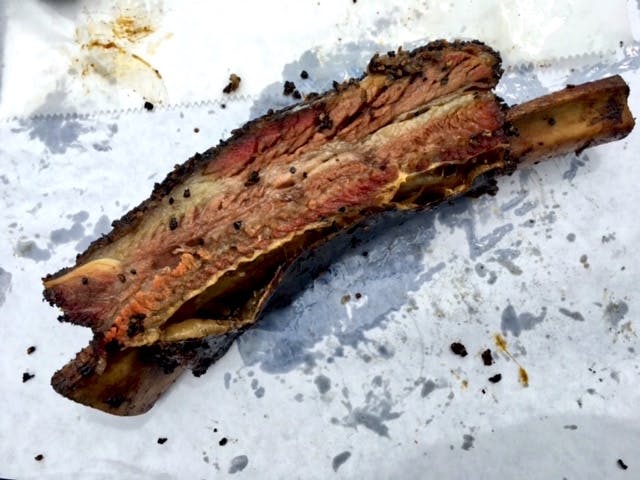 The bark on the beef ribs is heavy with coarse-ground black pepper. They’re enormous plate short ribs, so splitting one shouldn’t be a problem, but their size causes some confusion with the locals. Nobody else in town smokes beef short ribs. A few places do the smaller, and far less meaty, beef back ribs, so some customers ask for four or five ribs in an order before Ridenour shows them a sample.

More Mueller touches can be found, such as the squash casserole and the heavily glazed pork spare ribs. The glaze had set and was too sticky on ribs they served me. They had either cooled down considerably from earlier in the morning, or hadn’t been thoroughly reheated. The fat at the end of the ribs, which is usually glistening and translucent, was white and chilly. I moved on to the jalapeño sausage, made locally, which had a nice snap and good spice. 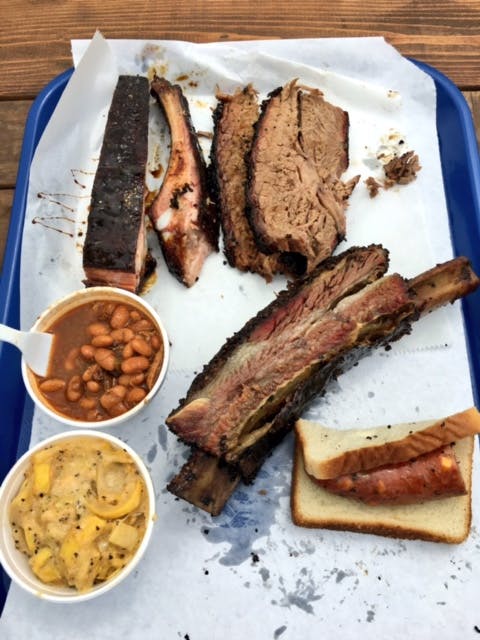 The brisket was a tale of two slices. The exposed end of the cut brisket sitting on the board had dried out, but they served it anyway. I wish they had Mueller’s sauce recipe so I could have revived it, but I set it aside in favor of the second thick slice of fatty brisket. It was tender and juicy with a crunchy outer bark, and had a good smokiness from the pecan and oak they have brought in from Brady. “At least three people a week come up here trying to sell me mesquite,” Ridenour told me, but he doesn’t like the flavor. “I tell them, ‘Wait until it gets cold and I’ll burn it in the fire pit.'”

The menu has all the Central Texas classics such as good pinto beans, slaw, and potato salad, but there are a few more unique touches like the spicy and satisfying jalapeño creamed corn and a Frito pie topped with brisket or pulled pork. I got it with the pork. I’d have preferred it with the tangy mustard sauce instead of the sweeter house sauce, but it was good, filling, and just $6. 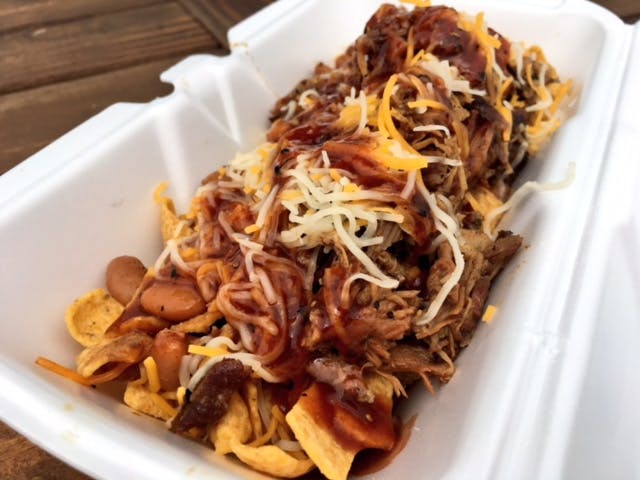 Even with a few hiccups, I haven’t had better barbecue in San Angelo. Neither had Sanchez’s father in-law, who convinced Ridenour to move to town. After Ridenour and Sanchez found a great deal on a trailer and a barbecue pit, Sanchez’s father-in-law offered them a patch of land on some property he owned, which is why the Pit BBQ is challenging to find for the uninitiated. Drive past the car wash and look for the flag flying above the gravel lot. If you love Central Texas style barbecue, or just need your beef short rib fix, this is the place to find it.