In 1877 an ad in the Brenham Weekly Banner touted that “Mr. Fritz Fisher … now announces that he is prepared to serve his customers with fine, fat, stall fed beef.” Today, the Texas Panhandle is home to plenty of concentrated animal feeding operations, or CAFO’s, but this may have been the first in the state.

In the decades since Fritz Fisher had his beef operation, the beef industry uses a lot more than simple animal feed to fatten their cattle. Since the link between sustained antibiotic use and accelerated growth in animals was discovered in the fifites, beef producers have been lacing animal feed with the stuff ’til, ahem, the cows come home. This uptick in drugs administered to cattle has led to what the New York Times called “the dangerous misuse of antibiotics in industrial livestock” earlier this year.

Another innovation are growth hormones, more specifically beta-agonists. These drugs promote protein cell production and allow a steer to really pack on some weight right before slaughter. In an article that examines the beef industry, National Geographic’s Carnivore’s Dilemma (set mainly in Texas), describes how these growth hormones work:

“Every animal that arrives at Wrangler [Feedyard in Tulia, Texas] receives implants of two steroid hormones that add muscle: estradiol, a form of estrogen, and trenbolone acetate, a synthetic hormone…Finally, during the last three weeks of their lives, the Wrangler cattle are given a beta-agonist. Zilpaterol, the one with the biggest effect, causes them to pack on an extra 30 pounds of lean meat.”

(Zilpaterol, sold as Zilmax, has fallen out of favor over the past year, so you’re more likely to find less potent growth promoters, like Optaflexx.)

National Geographic also points out, that not surprisingly due to these growth promoters, along with improved genetics “the average slaughter animal packs 23 percent more meat these days than in 1976.”

Growth hormones can also affect beef quality. A year after Zilmax use was largely suspended, the USDA noted that “cattle carcasses stamped ‘choice’ were up 2.3 percentage points from a year ago at 64.7 percent.” This improved marbling of meat could be attributed to less of the unnatural gain in lean muscle mass associated with Zilmax. Maybe slightly smaller cattle make for juicier beef.

And it’s that juicy beef that many Texas pitmasters are clamoring for these days. Some swear by prime grade beef or Certified Angus Beef, but a growing number are paying a premium for all-natural beef.

Unlike organic or grass-fed beef, there are no recognized standards to define all-natural beef. For a “natural” label to be placed on a cut of beef at the grocery store, the USDA requires only that it meet this simple definition:

Basically, if your beef doesn’t have any added ingredients like a marinade or salt solution, it can be legally called “natural” beef. That might be legal, but many consumers associate the term with cattle that haven’t been given antibiotics or growth hormones and beta-agonists, and that have been fed a vegetarian diet. The misleading marketing term also confounds cattle operators. John Tarpoff, the vice president of beef operations for Niman Ranch, which produces only all-natural beef, told me, “I’d love for there to be an actual, legitimate definition of what all-natural beef means.” Beef operations that use hormones and antibiotics can label their product natural, which frustrates Tarpoff and diminishes Niman’s standards and practices. Tarpoff also points out that many of the added drugs aren’t even necessary. “If you have the correct genetics [for growth] then you don’t need to use the implants,” he said. “If the percentage of prime in the country is two percent, ours is thirty to forty percent.”

Regardless of all-natural’s far-reaching definition, there’s a growing demand for the product. Especially among barbecue joints, which prefer the taste of the meat. “The flavor of the beef is noticeably better,” Nichole Buckman of Corkscrew BBQ in Spring, Texas told the Houston Chronicle recently. “Also, it has less of the hard fat that doesn’t properly render out.”

This all-natural beef trend seems to be gaining traction among professional pitmasters: upscale barbecue restaurant Lambert’s sells Niman Ranch ribeyes and all-natural brisket from Kansas-based Creekstone Farms. Creekstone also supplies prime brisket to Corkscrew and Killen’s Barbecue, which goes through 25 cases, about 1/3 of their total briskets, in a given week.

Creekstone boxes being carried from Franklin Barbecue by Obama’s staff:

RT “@adumbjones: @BBQsnob He better not have cut that line! He bought a crap ton of food. pic.twitter.com/MPk5EvwoPb”

And as with many trends in barbecue, this one can be traced back to Franklin Barbecue, which has done a lot to promote all-natural brisket in the barbecue world, sometimes to the restaurant’s detriment. Early in the life of Franklin Barbecue, owner Aaron Franklin began buying all-natural beef from Meyer’s Natural Angus in Colorado. He outgrew their supply and switched to Creekstone, goosing their popularity among barbecue aficionados. Now, with a demand of around 500 briskets per week, Franklin had to go with another line from Creekstone that isn’t strictly all-natural. Franklin explained, “We kinda ran out of all-natural brisket.” By that he means all-natural briskets that met Franklin’s quality expectations. “They were really inconsistent in spec and size. There weren’t as many to choose from because we were buying everything.”

Now that they’ve moved away from the strictly all-natural, there’s some supply for the rest of Texas. A rep from Ben E.Keith confirmed earlier this week that he had ample supply of Creekstone all-natural high choice briskets, although that might not be the case for long. Even so, Creekstone thinks they can keep up if they can find a steady demand. Alfonso Terrazas, a regional sales manager for the company, told me, “We have a lot more room for expansion.”

The size of these all-natural beef operations vary widely, but together they make up just a tiny, but growing sliver of the overall beef market. “Natural” and “Organic” (there isn’t a separate report for either) had a 4.5-percent market share (in pounds) of all the beef in the country in the first quarter of 2014. That number rose slightly to 4.7-percent in the third quarter. Creekstone is one of the bigger operations slaughtering 2,400 head of all-natural cattle per week. Compare that to just 600 head in the case of Niman. A self-confessed barbecue lover, Tarpoff sounded forlorn when I asked him about selling to some of the big barbecue names in Texas. “I’d love to sell to some of them, but size restricts us. Aaron Franklin does a phenomenal job with barbecue in Austin. We just don’t produce enough product to supply him.”

There are plenty of other small beef producers to choose from that specialize in all-natural beef. There’s 44 Farms in Cameron, Snake River Farms, Prather Ranch, Branch Ranch, Salt Fork Beef, among others. Some of the big boys are even getting into the all-natural game. Tyson has their Open Prairie Natural Angus, and National Beef has three natural programs – Naturewell, Vintage Natural Beef, and Nature Source Beef. Cargill also just announced a plan to produce sustainable beef, although their definition of sustainable is still fuzzy.

There might be a glut of companies getting into the supply end, but the supply is not always reliable. Just ask Pat Mares of Ruby’s BBQ in Austin. She was a pioneer in using ethically-raised beef. While the recent upstarts might get all the credit, Mares was experimenting as early as a quarter century ago. “We actually fell into using natural beef in January of 1989 through Wheatsville. We were very impressed with the flavor, the uniformity of the cut, the texture, and the way the brisket picked up and held the smokiness.” Nowadays she has to juggle between Premium Gold Angus, Creekstone, and a few others just to keep the pits loaded. Sometimes there’s just nothing left but commodity beef. “This past spring you could hardly get IBP beef,” she confessed, half embarrassed.

As the early trendsetter Mares is helpful for the expansion of the all-natural beef industry, but a couple decades of searching high and low for a steady supply allows the doubt to creep in. “There are a few more brands on the market right now, but considering brisket has grown in popularity I hope they can keep up.” 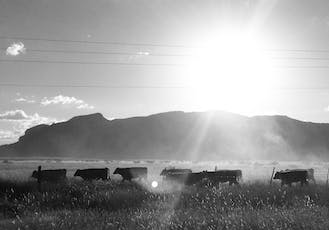