The image above is probably the most well-known in Texas barbecue. A photo of, or with, the iconic pit at the Salt Lick is on par with braking for our state’s bluebonnets along the highway. This particular photo fetched me nearly 3,000 likes on Instagram. My best image of a Franklin Barbecue brisket? 1,163 likes. The open pit’s flaming live oak and the tendrils of sausage hanging above mesmerizes, so much so that Salt Lick literally put a spotlight on it for the couple thousand customers that come by on a normal Saturday. After attending a festival across the road, I stopped in a few weeks back to snag this photo and get reacquainted with the Salt Lick.

Things have grown quite a bit since Thurman Roberts tended a pit out near the road in 1967. A couple of enormous buildings sprawl across the grounds, and the parking lot could accommodate a AAA baseball team’s crowd. There’s even a winery tucked in there. Even with all that seating, waits can be gruelingly long, but they try to make it as painless as possible with live bands, fresh-squeezed lemonade, and an open-arms policy to customers with coolers full of beer. My young son and I were able to sneak in at 4:45 p.m. on a Saturday with no wait (good thing, since we didn’t bring beer). Of course, he stopped to gaze at the open pit on the way to our table. 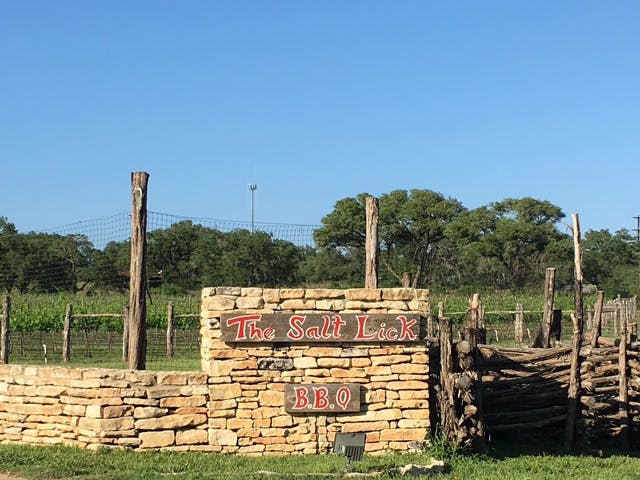 Salt Lick’s popularity, while undeniable, is baffling to some barbecue critics who feel the barbecue is overrated. Maybe so, but I’d take umbrage with anyone calling it awful, as I’ve heard many times. For me, it falls somewhere in the middle, making it at once the most underrated and overrated barbecue joint in Texas. A huge boost to the restaurant’s acclaim is its position as a Food Network darling. Bobby Flay, Adam Richman, and Duff Goldman have all claimed that it’s the best thing they’ve ever eaten. Michael Symon recently featured Salt Lick on his new series, “Burgers, Brew & ‘Que,” with that huge open pit as the star and owner Scott Roberts relegated to supporting cast member.

Journalists visiting from the coasts are also enamored with Salt Lick, and for good reason. It’s a one-stop shop for Texas cliches. You’ll pass a few horses and cows on your way out to Driftwood, which makes the photographer happy, then after a trip along a winding back road you’ll find a barbecue joint as big as Texas! Then there’s a barbecue pit as big as Texas! And a plate of barbecue as big as Texas! You get the idea. One New Yorker fresh from last year’s SXSW said it was the one Austin-area barbecue joint you should try before any others. With the number of high quality barbecue spots in Austin, that’s a stretch, but it was probably, honestly the best barbecue she’d ever eaten (Southern California to New York by way of Northern Indiana will do that to you). But people do show up here in droves for a reason. The barbecue is pretty damn good, just not all of it. 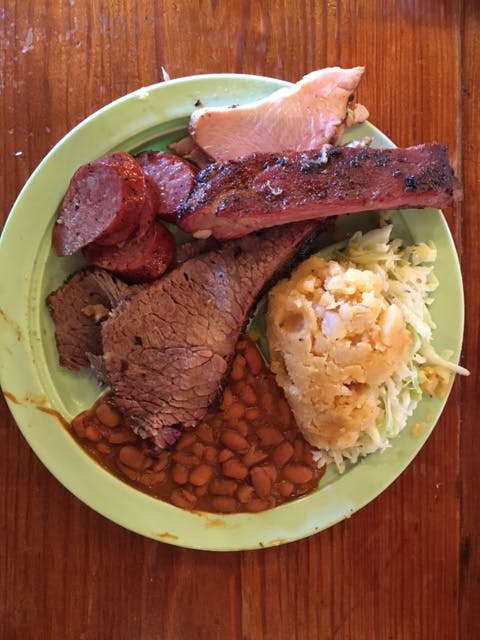 After finding a table, ordering is hard for those who can’t resist the possibility of all-you-can-eat. Don’t order family style. It includes brisket, sausage, and pork ribs. Only one of those, the pork ribs, is worth your money. The sausage is from the massive J Bar B plant in Waelder, Texas, and the brisket is inconsistent, to be kind. According to the Salt Lick Cookbook, they go through almost a million pounds of brisket every year. Estimating an average size of 12 pounds, that’s 1,500 briskets every week. For comparison, Kreuz Market in Lockhart goes through about 400 in the same span. This isn’t craft barbecue.

Those open pits, no matter how large, couldn’t fit all those briskets from start to finish. They’re smoked through in rotisseries in the back, then finished on the open pit for a couple hours while being basted in sauce. They offer lean, marbled, or burnt ends when you order the brisket, and I’ve only had luck with the burnt ends. The fatty brisket from this past visit was so tough I didn’t need more than a bite. That’s the bad news. The upside resides in the rest of the menu. 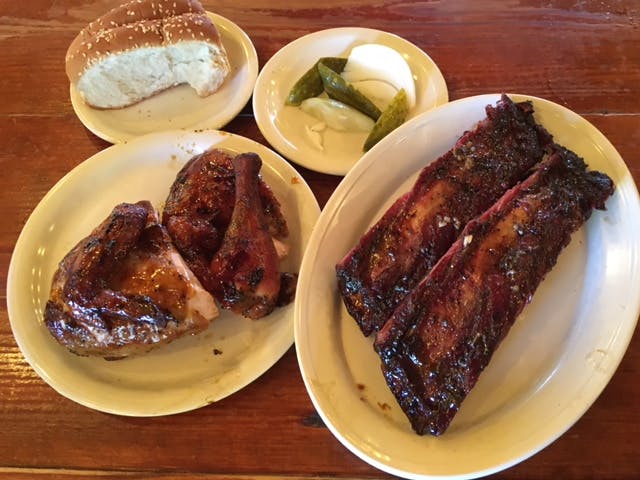 There is no combo plate for beef ribs, pork ribs, and chicken, but there should be. They could call it the “Order This Instead” plate. The beef ribs ($12.95 a la carte, as pictured) are back ribs, not the huge short ribs you might be used to back in Austin. They are glazed with the sweet sauce, and double cut, meaning every other bone is removed and tossed leaving double the meat on either side of the remaining bones. They’re spectacular, and mark the one occasion when my rule about no sweet on my beef goes out the window. I can’t get enough of that candy coating on these tender ribs, and the same goes for the pork ribs ($13.90 per pound). 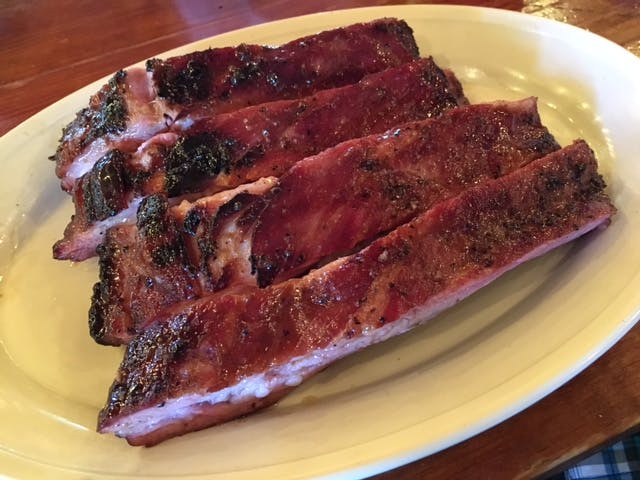 Big racks of spare ribs are cooked only on the open pit for a couple hours. Basted with sauce and cooked over direct heat, they have a well-formed bark and a nice chew. Ask for them without any additional sauce, because they have plenty. The half chickens get the same treatment. Oddly, all that sauce mopped on there keep the skin from crisping, but the meat is spectacularly juicy, and at $6.95 it is the bargain of the menu. If you want all the sides – slaw, potato salad, and beans – get the pork rib plate (which has the lowest side upcharge built into the price), and the beef ribs and chicken a la carte. Just remember to bring cash for all of it. The ATMs on site ain’t free. 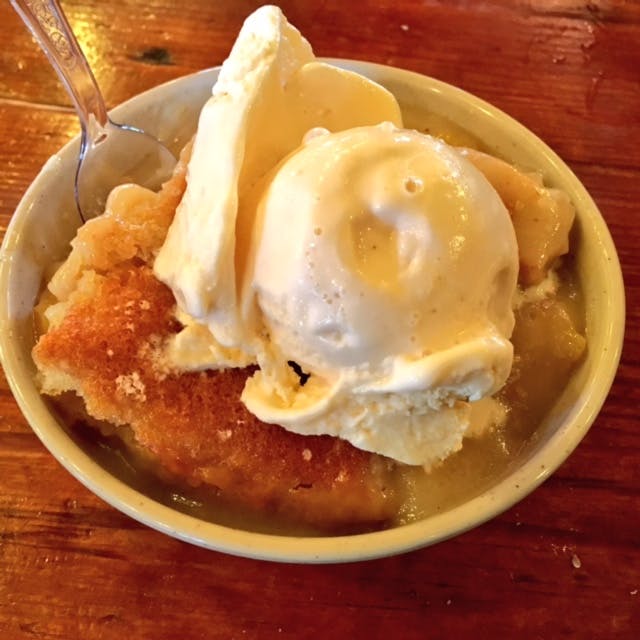 All that food is plenty for two people, and at $32.85, it’s $17 cheaper than two people eating family style. That leaves plenty of dough for the peach cobbler, which is one of the best in Texas. I must admit that I wouldn’t have bothered ordering it ($6.95 a la mode) if it weren’t for Michael Symon (I told you the Food Network had influence). Scott Roberts made the cobbler on Symon’s show, and it looked too good to pass up. The version I got at my table looked fit for television, and was better than any cobbler I’ve had in Austin.