It was twenty years ago that Ivy Chambers moved his budding sausage business out of his home and into a bona fide restaurant in Fort Worth. Over the years he added more barbecue items to the menu – brisket, ribs, bologna – and continued to operate the business until handing the reins to his son Alandres in 2009. Then last year, Alandres decided to make a move to a shopping center on the southwest side of town to gain some square footage. He had been running soul food specials on Sundays, but wanted to make those fried pork chops and oxtails part of the daily menu. Now he can serve all that and the barbecue.

Barbecue joints with soul food are always a good sight for someone tired of just potato salad, slaw, and beans. Here the cabbage is a standout, and the stewed okra and tomatoes is a good way to stay healthy. Although sometimes bean-weary, I couldn’t pass up on these which are more like red beans and sausage without the rice. A block of fluffy cornbread stands in for white bread. 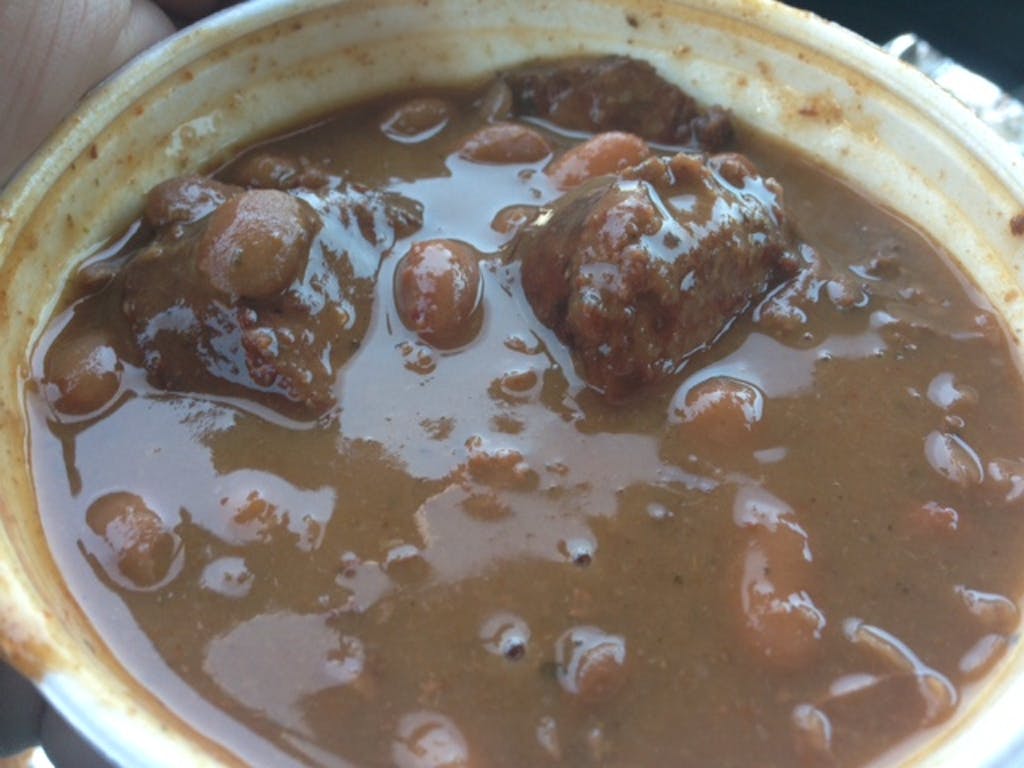 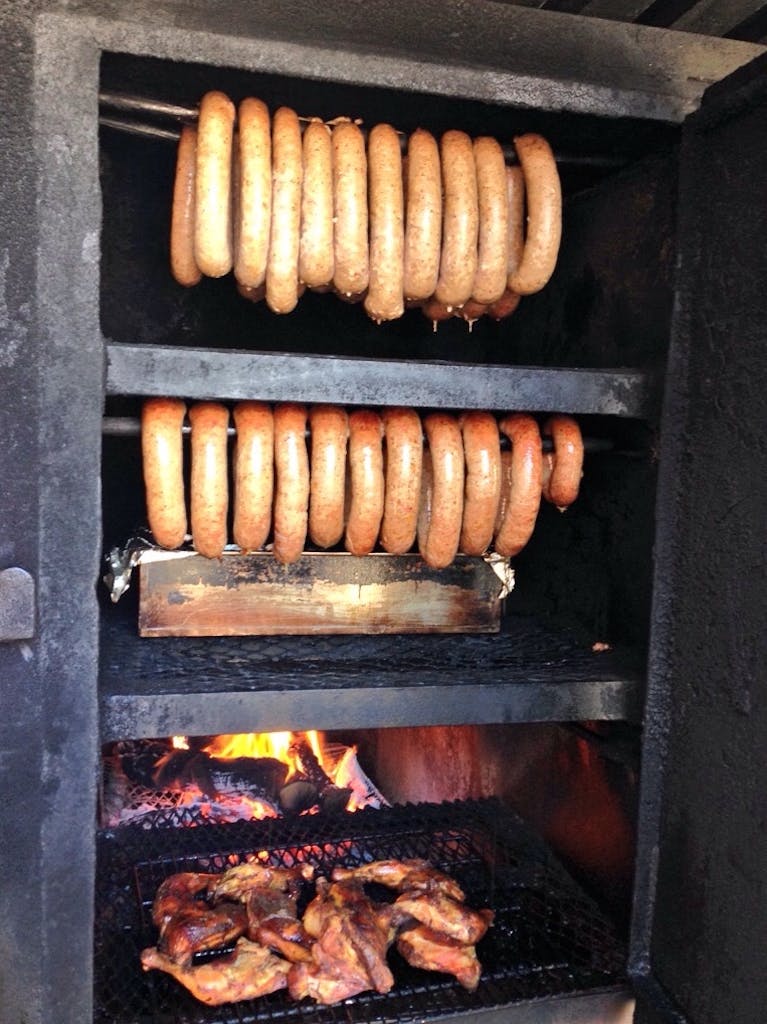 A smoke stained screen encloses a black cabinet smoker behind the restaurant. A stack of mesquite sits beside it, and mesquite coals inside are hot enough for an audible sizzle to make its way through the closed doors of the pit. Two rods full of one pound links drip fat down into a pan below (which is too close to the fire for my comfort), but before the molten fat can be collected it bastes a layer of chicken quarters smoking below the sausages. 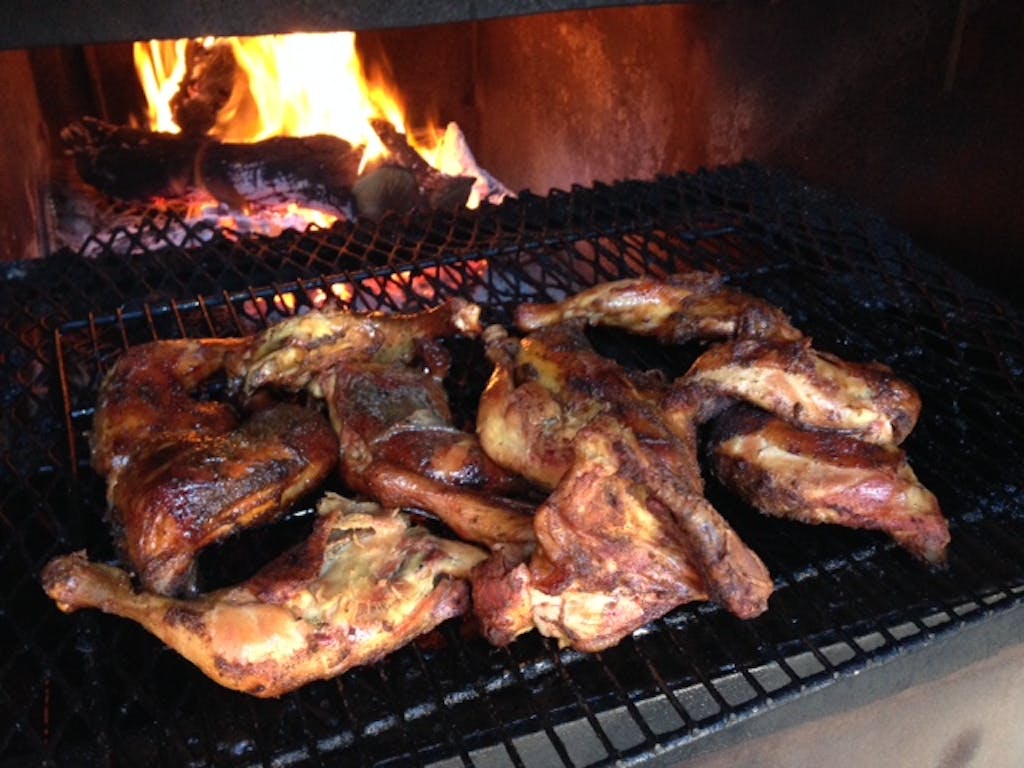 I wouldn’t have been drawn to the chicken on the menu unless I’d seen this cooking arrangement, and those two items on the pit together is about where’d I’d stop when ordering barbecue. Brisket and spare ribs round out the barbecue menu, but were a disappointment of overcooked meat with hardly noticeable smoke. The heavy barbecue sauce, probably a doctored version of Head Country, also worked to mask any other flavor. Ask for sauce on the side here, or none at all, and utilize the hot sauce bottles on the tables. I made a great dipping sauce for the sausage by combining a liberal amount of that hot sauce with a side of yellow mustard. 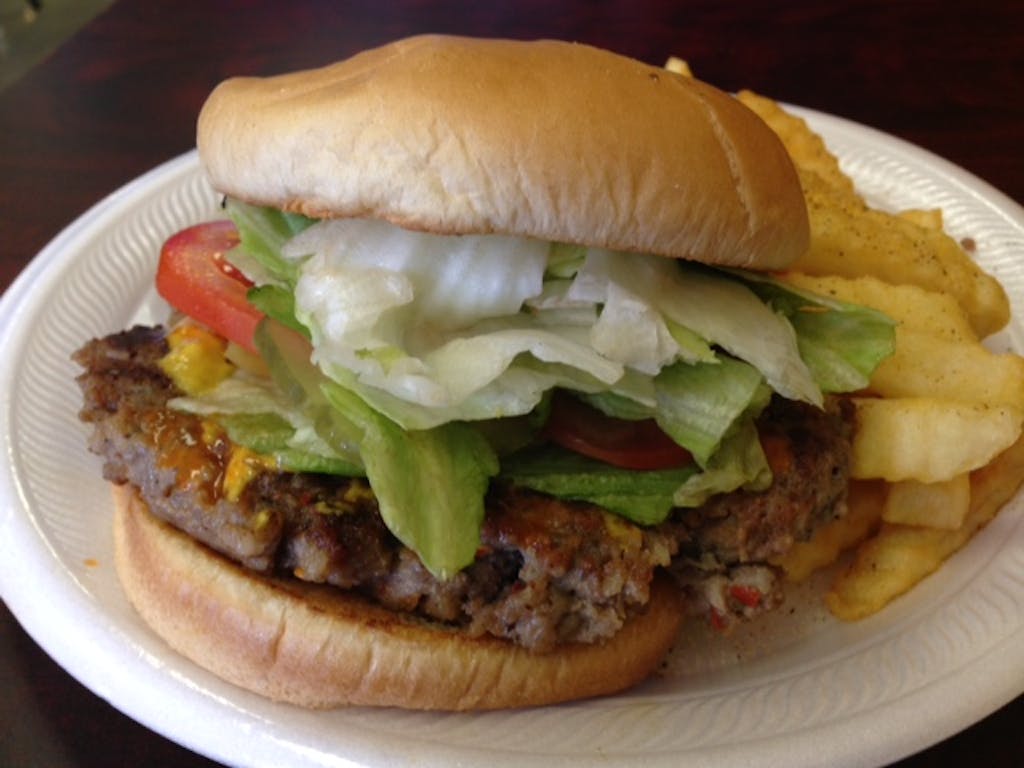 That condiment combo also works great on the sausage burger. I crossed my fingers when ordering that this wouldn’t be a beef burger with some sliced sausage on top. When it arrived, I was vindicated. Their ground sausage had been formed into a patty meant for two on a grilled bun made for one. While not smoked, having eaten one (well, half of one) makes it hard to order a beef burger here again. A smoked sausage sandwich was just a sauced up half link on a cold white bun. It was equivalent to a rib sandwich, where the bread is inconsequential. It’s just a way to get some sausage without having to order a full one pound link, which is the only way it can be ordered on its own. If you want to try all three sausages – beef, pork, and mixed – just order the three sandwiches and save the buns for later. 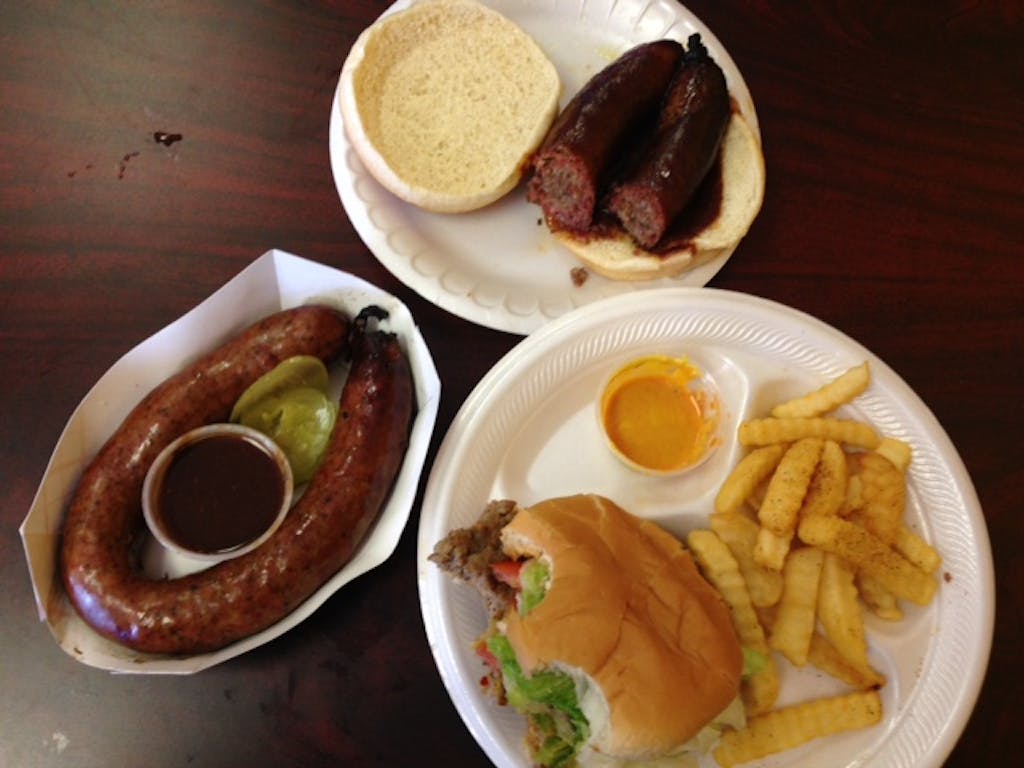 All the sausage varieties are made in house. As Alandres Chambers told me, “We grind it, stuff it, and cook it. Everything is on location.” And they do a lot of it, like up to 1400 lbs in a week. There’s some red pepper spice, a little sweetness, and some herbs in the mix. If you’ve had a Chicago hot link, these are dead ringers, but this recipe came from Midland, Texas where Ivy is from. “All my dad’s brothers make sausage in West Texas. He’s got three of them that have restaurants in Midland and Odessa,” Alandres told me. 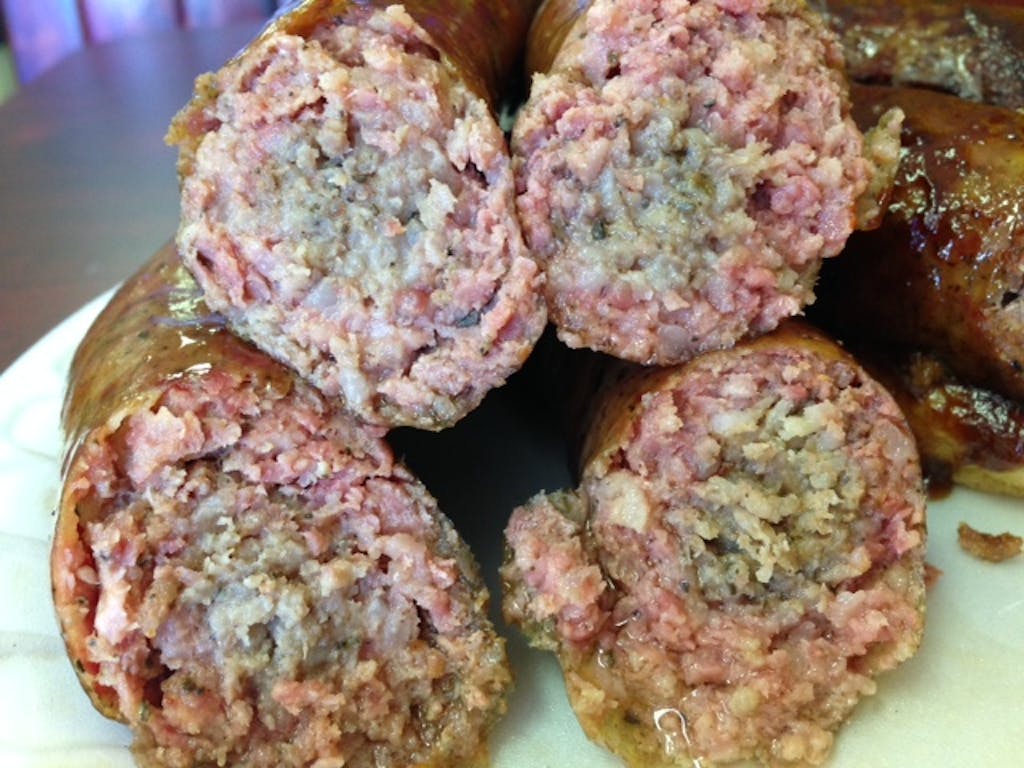 I liked all the sausage versions, but preferred the beef, which is made with ground brisket. It was juicy without tasting greasy, and toed the line between crumbly and cohesive. Learning that these links cook at about 350 degrees for less than an hour, I was stunned that they didn’t fall apart into a pool of grease. Alandres even swears they don’t use a binding agent in the mix. After twenty years, I guess they’ve got it down. According to Alandres, they started off with just beef sausage, then added a pork version and the pork/beef mix. “We even tried a chicken sausage one time. It didn’t do too good.” The beef sausage is still the most popular. 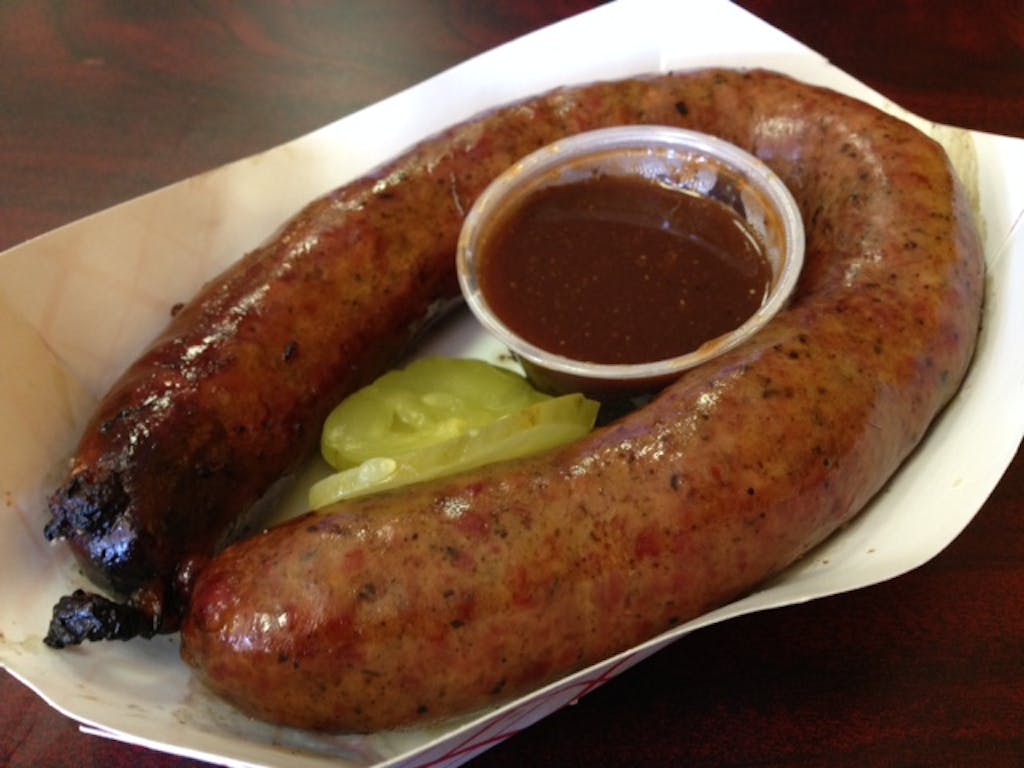 They open early at 10:00am, and I had to wait until after my meal and pit tour until the smoked chicken was ready to serve. As expected from chicken doused with pork fat through its smoking process, it was juicy. There was a heavy spice rub, but I wouldn’t call it spicy. I might even add a little salt and pepper, but a dash of the hot sauce worked just fine. They only offer leg quarters, but that’s the meat you want anyway with smoked chicken, and this one will keep you coming back. 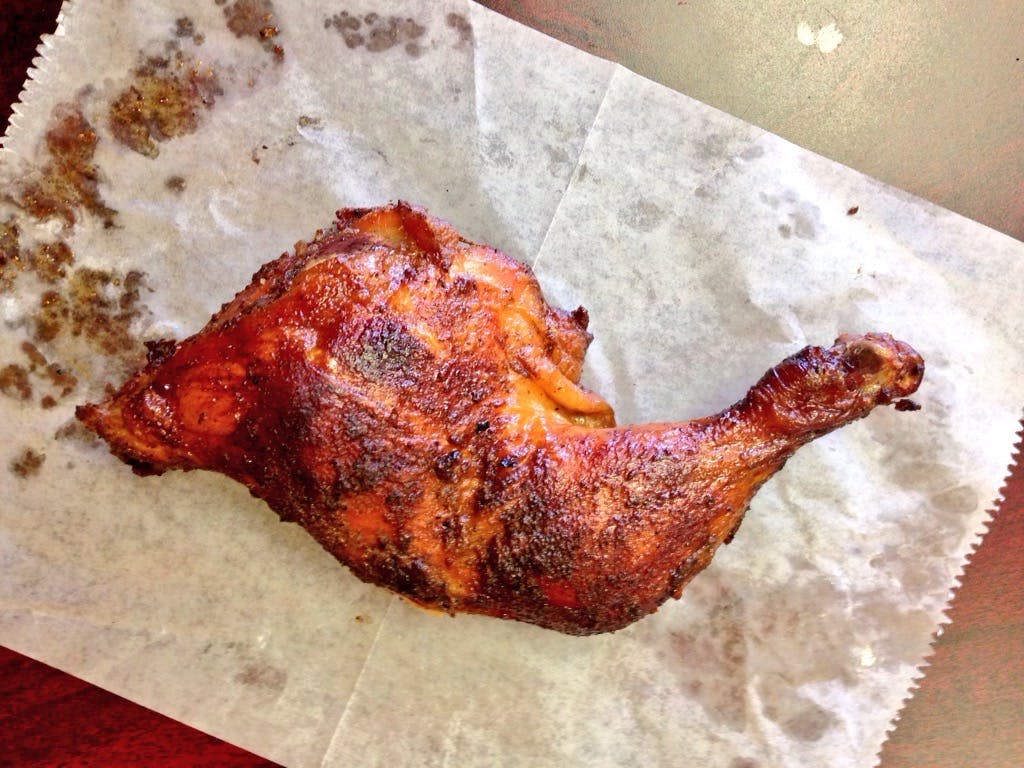 An array of colorful desserts, made by Alandres’s mom Mary Chambers, is piled next to the register. I’ll take pie over cake any day, so digging in to find the personal sized sweet potato pie was worth it. I let it rest on the dash on the way home. The smell of browned butter and spices filled my nose when I opened the plastic clamshell, and the pie didn’t last long.

Visitors to the Sausage Shoppe would be wise to remember the name when ordering. With brisket getting the spotlight these days, we tend to judge barbecue joints on smoked beef alone (I’m guilty of it too), but in doing so we might miss the other gems coming out of the smoker. Making sausage is a process just as arduous as smoking a good brisket, so what’s the problem with skipping over the bad to enjoy some great West Texas sausage and fat-basted smoked chicken? Nothing at all. Halfway into that beef link, I knew they didn’t need to serve anything else to get me back here.