“You can master this process fairly quickly.” This was the quote from Slow Bone owner Jack Perkins a few months before he opened his first barbecue joint in April of this year. Perkins has been a force in the Dallas dining scene since his much heralded burger joint, Maple & Motor, opened in 2009. The Slow Bone is his first foray into smoked meats, unless you count Meat Fight. Jack was a contestant in the local barbecue competition last year before he went pro. I was a judge and his brisket was the best of the entries from three barbecue amateurs, but the barbecue business is a whole different game from a one day competition. When the restaurant was announced Jack also promised to never close early (the original closing hour was 7:00pm every day), to never run out of meat, and to never serve day-old smoked meat. I think anyone running a barbecue joint read that and knew at least one of those would give eventually. 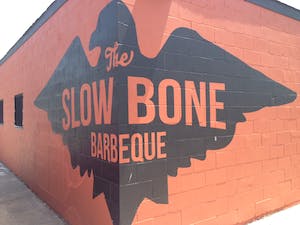 After a bit of a delay, the joint opened on April 16th. A day later the Oyler rotisserie smoker named Miss Jessie foundered and they had to close for the day for repairs. I was in line the next day for the first look when the credit card machine went down. It was off to a rocky start, but the meat showed promise. The ribs were a bit tough and the brisket under-seasoned, but it was just the third day. I got a good laugh when I returned last week. There was a new sign on the door with updated hours. Like I said – something had to give. 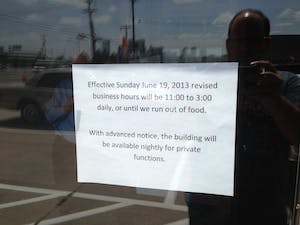 Jack was working the line when my wife and I walked in. Jack and I know each other, so I gave him a bit of ribbing about the change in attitude about selling out of meat. I half expected it given the joint’s Facebook timeline. Within a couple weeks of opening, whole briskets were advertised at rock bottom prices as closing time neared. Days later, you could get a day-old rack of ribs on the cheap. A month into it they were already closing early. Even with the light-hearted joking, Jack’s response was the same mantra he has maintained since he first started talking about a barbecue joint. The primary goal was high quality meat, and the change in hours was required to meet that goal consistently. I can appreciate that. More important was the brisket in front of me. It was covered in a substantial bark and jiggled nicely on the board. This was looking to be a good meal. 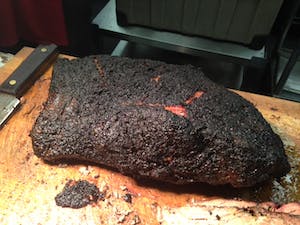 By the time we got to the table we had more than half the menu on our two cafeteria trays. In addition to more than a half dozen meats, there is a large variety of sides available. Some are familiar like slaw, beans, mac & cheese, and fried okra, but they tread on some unfamiliar territory as well. Cauliflower and brussel sprouts was a well cooked mix with just enough cheese to hold it together. A very good side of greens had plenty of bacon and a nice bitterness often missing when too much sugar is used. The mac & cheese was rich and was the only side my wife and I really fought over. Hushpuppies can sub in as your bread choice, but make sure to get the fried items when it’s busy. Both the okra and the hushpuppies can lose their crispness pretty quickly on the steam table when business is light. A welcome sight was the pea salad. The pop of the peas along with the diced egg and chunks of cheese make this one of my favorite barbecue sides, but I don’t find it often. 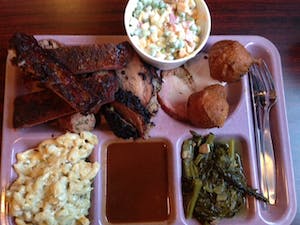 The meats are all smoked over hickory, but the depth of smokiness varies considerably. A slice of pork loin stuffed with sausage was adequately seasoned and pleasantly moist, but it’s quick cooking time kept it from getting much smoke at all. A swipe through the thin and vinegar-heavy sauce livened it up. The texture on the ribs had improved greatly, but the cumin-laden rub was about all I could taste. Things improved quickly with the other proteins. 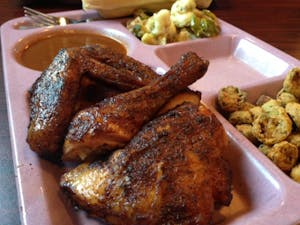 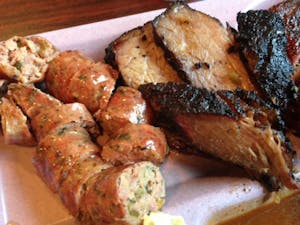 While the chicken breast as a tad dry, the dark meat was fantastic. The skin wasn’t exactly crispy, but you can bite cleanly through it. Every piece was nicely seasoned and adequately smoky. They get three sausages from Hudson Meats on South Congress in Austin. The cilantro sausage is one of those options made specifically for Slow Bone. The casing had a good snap to it and the coarsely ground meat had great flavor. The cilantro-averse should steer clear, because the herbal flavor is unmistakable. Now it was time for that good looking brisket. A bite from the fatty end was pull apart tender with plenty of well rendered fat throughout. The crust almost crackled it was so substantial. I like my meat smoky.This was just on the edge of being over smoked, but it had been reined in just in time. Thick slices from the lean end had a layer of good fat, but they were a good but drier than the fatty end. You’re given the option at the cutting board, and I’d go with the fatty on a return visit. Just get their early, because they may be sold out.