As I pondered my order, a surly pitmaster noticed my FCGBBQ T-shirt and made some smart comments about me spying on his joint to get some tips for mine. He didn’t know I was just there to review it, so it was great to talk with him afterward to tell him how good it was. After the jovial verbal sparring, I ordered up some ribs, sliced brisket, and sliced pork. 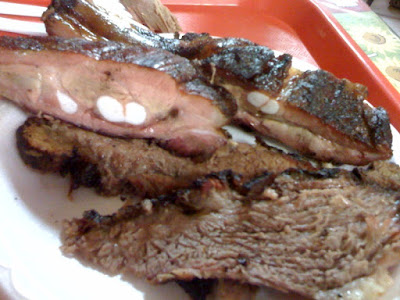 Brisket was cut from the fatty end. There was plenty of fat left on the slices, but it was all well rendered to make the slices meltingly tender. The bark was well formed, and the heavy salt rub combined with 24 hours in an all-mesquite-fired smoker created a brittle and dry crust, but coupled with the moist meat, it made for a great combination. The pork came from the shoulder. It had well rendered fat throughout the slice and a great bark. The overall flavor was so good that it’s got to be some of the best pork shoulder I’ve eaten. Meaty spareribs had a great bark, but could have been smoked a bit longer to get the meat more tender. The rub, if any, was light and allowed the flavor of the pork and smoke to shine through.

When the meal was over, I gave the pitmaster my card and let him know how well I liked it. He laughed and just welcomed us to come back for some more great smoked meat. I think I’ll take him up on that repeat visit.