After graduating from college, Mario Dominguez Jr. moved home to Mercedes, in the Rio Grande Valley, to join his family’s insurance agency. He enjoyed having his mama’s cooking once again, but he also found himself intrigued by Central Texas barbecue. After many barbecue “research” trips, he built a brick pit and eventually converted his home on Hidalgo Street into a barbecue joint. The man’s a purist. He even imports his joint’s namesake oak from the Hill Country. Fastidious technique is evident in everything he does, be it subtly smoked brisket with expertly rendered fat and salty bark or mountains of succulent pulled pork with a hint of sweetness. By the way, props to the fresh, tangy coleslaw. 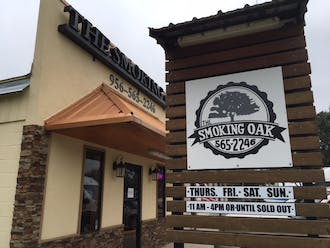