After many years of barbecue success at Stiles Switch BBQ & Brew (which made the Texas Monthly Top 50 list in 2013 and 2017), owner Shane Stiles thought it was time to branch out. He wanted a second restaurant that was less laser-focused on Central Texas style barbecue than the original. After teaming up with chef Todd Duplechan from Austin’s Lenoir, they opened The Switch last June in Belterra Village out near Dripping Springs. There’s still plenty of barbecue, but the goal was to blend Cajun flavors with their beloved smoked meat. After seven months in business, they’re dialing back the Cajun side of the menu and adjusting to a new audience.

I stood in line to order meats from the front counter during my first visit to The Switch shortly after it opened before waiting at my table with an order number. Stiles said he modeled the process after the Hopdoddy burger chain, but the barbecue line didn’t last. “Pretty much right away the customer base let us know that they hated that,” he said. By my second trip, they’d switched to full table service.

Stiles and his staff have spent more time educating their clientele about barbecue than he expected. The Switch is just a thirty-minute drive from Stiles Switch on North Lamar, but Stiles said the residential developments surrounding The Switch are popular with transplants from outside Texas. “You hear all the time that Austin is all California, but Dripping Springs might literally be all California,” joked Stiles.

The Switch is a beautiful restaurant. It’s bright white and ambitiously large, built to accommodate big parties and events. Stiles jokes that it’s still too clean. “We’re doing our best to patina that sucker,” he said. The porcine iconography of Stiles Switch is traded for an array of steer heads, both on the walls and smoking a pipe on the sign outside. There’s a patio, a full bar, and a spacious pit room that could double for a Moberg smoker showroom, as four glossy, black, 1,000-gallon smokers from the Dripping Springs welder, Sunny Moberg, churn out the variety of smoked meats.

The barbecue menu is mostly predictable if you’ve been to Stiles Switch. One new entry is the spicy, smoked Ragin’ Cajun Boudin, which was developed by pitmaster and sausage savant Christopher McGhee. It’s got Louisiana roots, but instead of just pork, it also includes crawfish and bacon. It’s my favorite of the Cajun-inspired menu items. They also make all their own sausage here, unlike Stiles Switch, where they use some outside suppliers. Stiles said that might end once they can ramp up their sausage making capacity at The Switch. As of two weeks ago, they started sending house made mild and jalapeño cheese sausages to Stiles Switch, which is good news for sausage lovers. In a head-to-head tasting over three visits, Stiles Switch’s brisket and ribs won out each time, but that jalapeño cheese sausage from The Switch was the best sausage on either menu.

Stiles has asked for a little patience while they dial in their new smokers, increase sausage production, and tweak the opening day menu. He also reminded me that they’re seven months in, and noted that it took several years for his first restaurant to hit its current stride. To develop The Switch, Stiles is stockpiling barbecue talent: McGhee, who spent time at la Barbecue and Freedmen’s, shares pit room duties with Bill Dumas, who worked at Smokey Denmark’s. They both came over to The Switch from Stiles Switch. They also have Troy Warlick, who spent time at Schmidt Family BBQ in Bee Cave; and Marco Oglesby, who has experience at Opie’s in Spicewood, the now closed Kreuz Market in Bryan, and most recently at Texas Ranch BBQ in Austin. It’s a great team of barbecue talent, and their barbecue gets better every time I visit. I had an impressive line-up of smoky brisket, sweet and spicy pork ribs, and juicy jalapeño sausage during my last in January.

I also enjoyed forgoing the traditional barbecue offerings for some of the inventive Cajun dishes. Chef Barclay Stratton makes a mean gumbo that uses smoked brisket and sausage. Instead of rice, it’s served with a scoop of cold potato salad, which tames the spice a bit. Most of the other Cajun items I tried are now history. Stratton has retooled the menu (an old version is still on the website) to reflect the local tastes. Gone is the pork “ribeye” in favor of a double-cut smoked pork chop. A simple smoked half chicken has replaced the chicken piquant, and a chicken fried steak special was popular enough to add to the daily menu. I’ve also seen specials of smoked chicken enchiladas and pork rib queso. The popularity of Tex-Mex barbecue is hard to ignore, even for a Tex-Cajun spot.

End your meal with an order of the house made cobbler or the playful S’mores Switchwich, a glorious mess of chocolate, cookies, and toasted marshmallows. Eat it with your hands at your own risk.

Sunday brunch is also worth a stop. Anything on one of these fluffy, buttery biscuits would be good, and using them as the base for a brisket benedict with perfectly poached eggs was a great way to start a Sunday morning.

The Switch is ambitious in many ways. Stiles chose to be a pioneer in a development that doesn’t feel like a part of Austin or Dripping Springs, and pivoted to full service when his customers asked for it even though he hadn’t envisioned hiring a waitstaff. The team here developed a menu that was a fresh take on Texas barbecue when Stiles could have more easily copied the successful model of Stiles Switch for this second location. Not all of it worked, but the place gets better every time I visit. Stiles is hopeful about the direction of The Switch, emphasizing that he chose their location to be part of the community that is developing around them. “We’re working daily to get it going where we want it,” he said. “We’ve definitely built it for the long haul.” 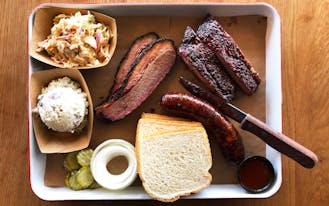