Southside Market in Elgin opened its doors in 1886, making it Texas’s oldest barbecue joint. Predictably, it has transformed considerably in its 130-year history. The original ownership, location, menu—even the famous sausage recipe—have all changed over that time. But this is not a story about eroding traditions. Southside Market stands as a living example of Central Texas barbecue’s evolution. Its timeline is a microcosm through which we can understand how we arrived at the style of barbecue we now enjoy today in Texas—and beyond.

As we discussed last week, the origin story of Southside Market is a bit murky, but like so many barbecue joints in Central Texas, it began as a meat market. Initially, the only menu item was “hot gut” sausages. When Ernest Bracewell bought the business in 1968, sausage was still central to the menu but had been joined by a few other items, as documented by Foodways Texas in their 2007 interview with Bracewell: “The main menu for the barbecue was sausage—sausage, sausage, sausage. We had a little beef—had beef steaks and pork steaks and a few things like that, but the main thing was sausage.” The sausage remains the number-one seller today, and Southside makes more than two million pounds of the stuff every year. This commitment to sausage has been passed down through the generations. As Bracewell’s grandson (and Southside’s current owner) Bryan told me 2014 interview, “We have sausage and stuff that goes good with sausage.” 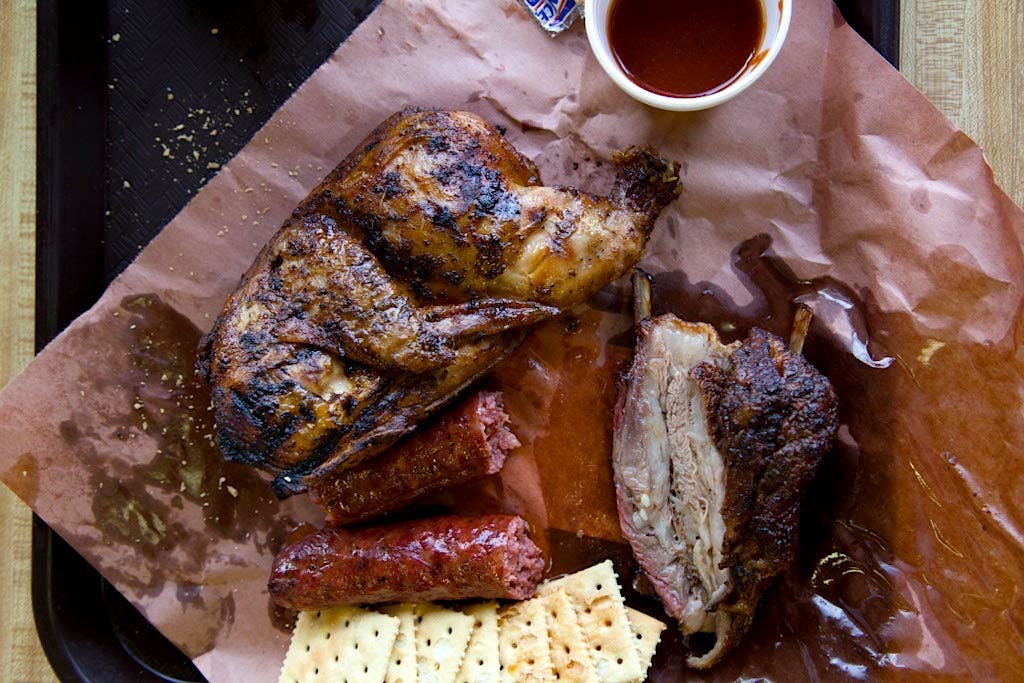 What they didn’t serve back in 1968 was brisket. That didn’t come until the early seventies, according to a timeline provided by Southside. A 1977 article in the Round Rock Leader listed the menu as beef ribs, pork ribs, mutton ribs, pork steaks, beef steaks, sliced brisket, and sausage. At $3.50 per pound, beef steaks and pork ribs were the priciest items. And that was the full menu (besides the pickles, onions, crackers, and white bread for a nickel a slice). There were no sides. Everything was served by the pound on butcher paper. The only sauce was the bottled hot sauce that had come to replace the “hot” in hot guts.

The new sauce was added on the tables because of a tweak by Ernest Bracewell in the hot gut recipe that tamed its heat. He wanted to market his most famous product to the masses so he used a milder red pepper and began buying cracked black pepper that had been sifted to remove any large pieces that might provide a surprising burst of heat. “You get enough pepper to get the heat and the taste,” he told the Elgin Courier in 1982. “The hotter pepper has fire, but very little taste.” The hot sauce bottles were put on the tables for those who still wanted the fire with their sausage. Vinegar, pickle juice, and cayenne were the sauce ingredients listed in that 1977 article. A thicker, tomato-based barbecue sauce came in the eighties.

The heat wasn’t the only thing about the sausage recipe that Bracewell changed. Long-time employee Bud Frazier, who started at the market in 1902, made the sausage regularly and was credited with the recipe in later articles, but he was likely using someone else’s recipe as a starting point. Honestly, it wasn’t much of a regimented recipe. Bryan told me a story he had heard from his father, Billy: “The sausage was whatever was in the meat case that was about to go out of date or go bad. That would go into the sausage.” That meant beef or pork in varying ratios. All the spices were done by eye as well, but Ernest wanted a recipe that could be duplicated, one that could be passed down. He watched Frazier make several batches. He also weighed the ingredients and averaged out the totals to come to a single recipe. Then he eliminated the pork in the mix. Today, the signature menu item at Southside Market is still that all-beef sausage in natural pork casings.

Bigger changes came to the menu when Southside moved in 1992 from their downtown location to the current one out along Highway 290. They lost the ambience of the old building downtown (they brought some of the old wall tiles to apply to the new pits), but used the transition to modernize their offerings. Iced tea and side items like potato salad and beans were added for the first time just twenty-some years ago. After going a century without items considered requirements for Texas barbecue joints, Southside became the example of the idiom that yesterday’s innovations are today’s traditions. 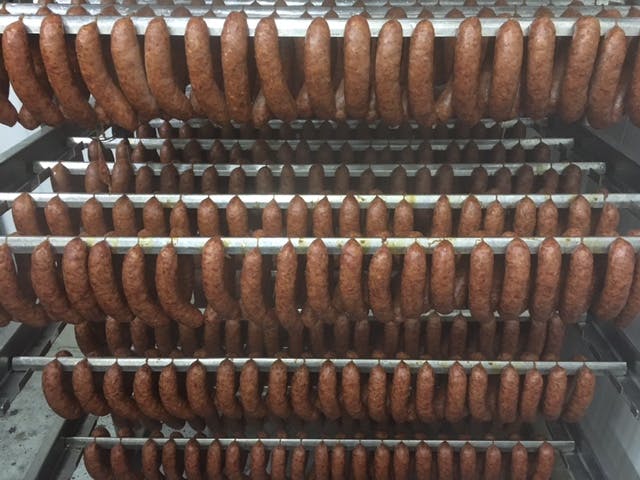 Then came baby back ribs. Later it was smoked chicken, sliced turkey, and a whole array of desserts. The new location also brought a spotless USDA-inspected facility for processing sausage. This brought the ability to package the famous hot guts for grocery stores, and with that came more sausage varieties, like one with pork and a spicier “1882” sausage. Bryan was instrumental in developing the new recipes, and he explained some of the reasons for the new varieties:

Our first 125 years we had one sausage recipe. Now we distribute our sausage to grocery stores. We wanted more shelf space, so we needed more flavors of sausage. At that time in ’07 and ’08 beef prices were kicking our butt. When the beef prices went up we really suffered, so I developed a pork sausage and a pork and beef mix.

Bracewell also added a popular jalapeño sausage to the restaurant menu just nine years ago, further crystallizing Elgin’s title as the Sausage Capital of Texas (as deemed by the Texas Legislature in 1995). As Texas’s oldest barbecue joint, Southside Market could rest on its pork-encased laurels, but Bryan Bracewell is still pushing to improve. During my latest visit he was taste testing briskets, trying to apply knowledge from last month’s Camp Brisket, held at his alma mater, Texas A&M. He also wants to be known for great brisket while maintaining the legacy of hot guts for the next generation of Bracewells.